The turbine oil market is projected to reach USD 1.91 billion by 2030, at a CAGR of 3.9% from USD 1.40 billion in 2022. Because of improved economies and rising energy consumption in both emerging and developed parts of the world, the turbine oil industry is expanding rapidly. The turbine lubricating oils include high quality and superior water separation capabilities. Traditional turbine oils are the most widely used mineral-based lubricants because they assist to reduce external contamination and oxidation products. With the recent adoption of bio-based turbine oils, it is expected that their use would increase more quickly overall, particularly in North America and Europe. 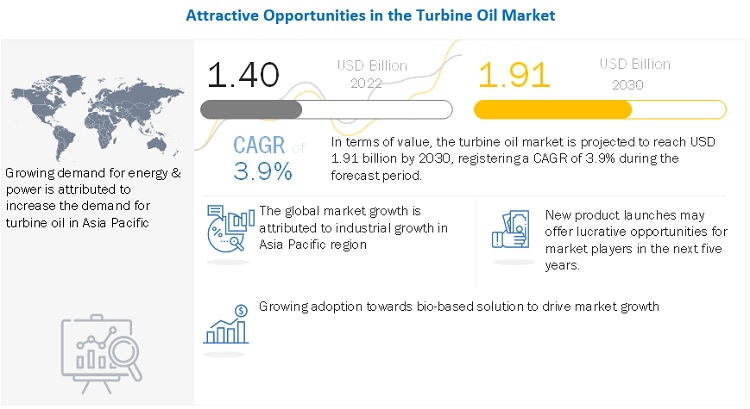 The necessity for installing additional gas, steam, and hydroelectric power turbines has increased due to the rise in global energy consumption. The market for turbine oils is also influenced by factors including an increase in wind energy investment and supportive government initiatives and legislation. Global demand for renewable energy is now rising as a result of policy interventions by several nations, such as Nationally Determined Contributions (NDCs) and Sustainable Development Goals (SDGs).

Hybrid vehicles contain both a small internal combustion engine (ICE) and an electric motor for optimum power utilization and reducing emissions from vehicles. The growing number of hybrid vehicles will reduce the demand for lubricants per vehicle almost by half, as per industry experts. This factor, coupled with increasing battery parity, will reduce the volume of the global turbine oil market.

The number of wind turbines is increasing along with the size of the turbines. These turbines are being installed in remote and offshore locations. Thus, performance is paramount and any gearbox and bearing failure may lead to a huge problem. With the growing number of wind turbines and improved gearbox and bearing technology, the use of advanced lubrication is increasing. Similarly, hydroelectric power generation and tidal power generation also involves huge turbines. Thus, the growth of the renewable energy industry is expected to positively impact the turbine oil industry and offer lucrative opportunities to turbine oil manufacturers.

Regulatory and policy restrictions on fossil-fuel fired power plants can however, restrain the growth of the steam turbines market. Growing concerns about the negative impact of carbon emissions on climate and consequent measures by regional and country level policies such as capping the amount of emissions acceptable from these plants have led to retirements of existing plants as well as shelving of future construction in favor of other options, even if they are more costly.

“Mineral Oil was the largest base oil for turbine oil market in 2021, in terms of value”

The mineral oil segment is leading the overall turbine oil market, in terms of value, in 2021. This is owed to the growing demand for mineral oil in the automotive sector in the developing countries of Asia Pacific, the Middle East & Africa, and South America. There is growing demand for Group II base oils, mainly in the developing regions of the world. They are produced via petroleum refineries in large quantities because of its high usage in different sectors such as transportation, industrial machinery, and equipment.

“Steam turbines was the largest turbine type for turbine oil market in 2021, in terms of value”

The growth is attributed to the continuing investments in electricity generation infrastructure, particularly in the large economies of Asia Pacific region. Coal fired power generation continues to remain one of the most affordable option for developing economies in the world, particularly in Asia-Pacific. Moreover, there is sufficient supply of coal for usage as fuel, while other options such as natural gas require creation of new infrastructure for its import and use. Although, the world as a whole is slowly moving away from coal-based power generation in view of growing environmental concerns, the transition is expected to be slow and would need syndicated efforts across different economies to take place.

“Asia Pacific was the largest market for turbine oil in 2021, in terms of value.”

The Asia Pacific region led the worldwide market for turbine oils in 2021 and is estimated to grow at highest CAGR over the next five years. The installation of wind turbines and steam turbines will ultimately increase due to the high need for power generation in China, Japan, India, and Southeast Asia. 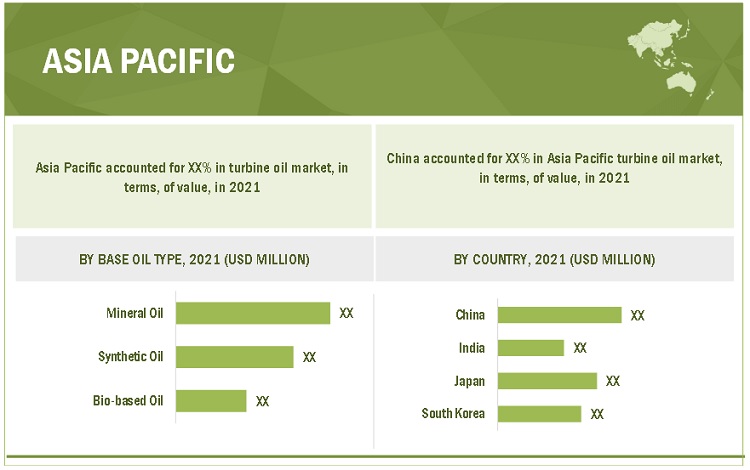 This report categorizes the global turbine oil market based on application, end-use industry and region.

On the basis of base oil, the turbine oil market has been segmented as follows:

On the basis of turbine type, the turbine oil market has been segmented as follows:

On the basis of end-use industry, the turbine oil market has been segmented as follows:

On the basis of region, the turbine oil market has been segmented as follows:

What is the expected growth rate of turbine oil market?

Who are the major key players in turbine oil market?

What is the average selling price trend for turbine oil market?

Prices are low in Asian countries (primarily China and India) compared to those in Europe and North America due to the low prices of raw materials and the availability of low-cost workforces in Asia Pacific. .

The study involved four major activities to estimate the size of turbine oil market. Exhaustive secondary research was done to collect information on the market, the peer market, and the parent market. The next step was to validate these findings, assumptions, and sizing with industry experts across the value chain through primary research. Both top-down and bottom-up approaches were employed to estimate the complete market size. Thereafter, the market breakdown and data triangulation procedures were used to estimate the market size of the segments and subsegments.

Secondary research has been used to obtain key information about the value chain of the industry, monetary chain of the market, the total pool of key players, market classification and segmentation according to industry trends to the bottom-most level, and regional markets. It was also used to obtain information about the key developments from a market-oriented perspective.

The turbine oil market comprises several stakeholders in the value chain, which include raw material suppliers, manufacturers, distributors, and end users. Various primary sources from the supply and demand sides of the turbine oil market have been interviewed to obtain qualitative and quantitative information.

The breakdown of profiles of the primary interviewees is illustrated in the figure below: 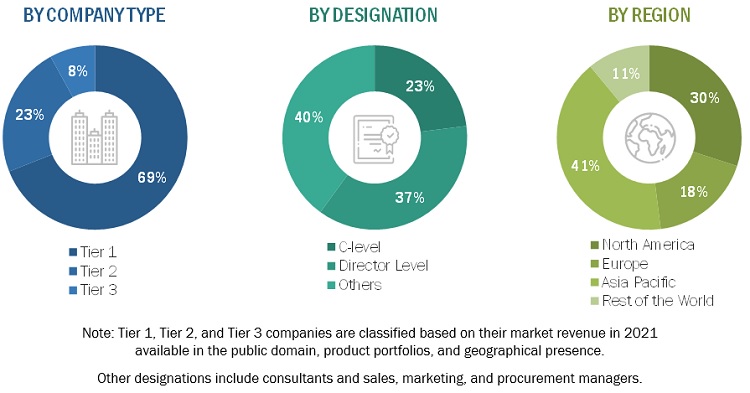 The top-down and bottom-up approaches have been used to estimate and validate the size of the turbine oil market.

After arriving at the total market size from the estimation process explained above, the overall market has been split into several segments and sub-segments. To complete the overall market engineering process and arrive at the exact statistics for all the segments and sub-segments, the data triangulation and market breakdown procedures have been employed, wherever applicable. The data has been triangulated by studying various factors and trends from both the demand and supply sides. Along with this, the market size has been validated by using both the top-down and bottom-up approaches and primary interviews. Hence, for every data segment, there have been three sources—top-down approach, bottom-up approach, and expert interviews. The data was assumed correct when the values arrived from the three sources matched.

Along with the given market data, MarketsandMarkets offers customizations according to the company’s specific needs. The following customization options are available for the report: