The objectives of this study are to analyze the aircraft fairings market, along with the provision of statistics. It also aims to define, describe, and forecast the aircraft fairings market on the basis of the application, material, platform, end user, and region. The year 2017 has been considered the base year for this study, whereas 2018 to 2023 is considered the forecast period.

The research methodology that has been used to estimate and forecast the aircraft fairings market begins with capturing data on the revenues of the key aircraft fairings players through secondary sources, such as International Air Transport Association (IATA), Department of Defense (DoD), and paid databases. Aircraft fairings offerings are also taken into consideration to determine the market segmentation. The bottom-up procedure has been employed to arrive at the overall size of the aircraft fairings market from the revenues of key players in the market. After arriving at the overall market size, the total market has been split into several segments and subsegments, which have then been verified through primary research by conducting extensive interviews with key experts, such as Chief Executive Officers (CEOs), Vice Presidents (VPs), directors, and executives of the leading companies operating in the aircraft fairings market. Data triangulation and market breakdown procedures have been employed to complete the overall market engineering process and arrive at the exact statistics for all the segments and subsegments. The breakdown of profiles of primaries has been depicted in the figure below: 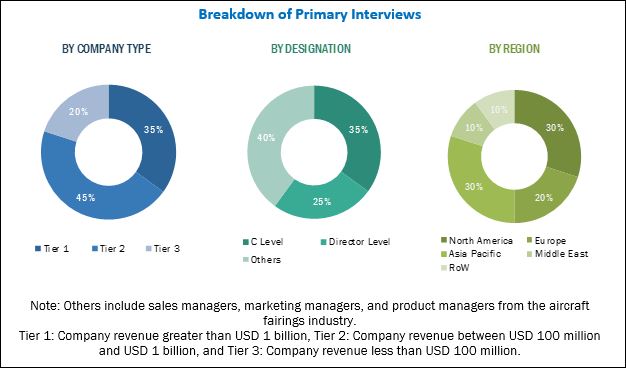 The aircraft fairings ecosystem providers, such as ShinMaywa (Japan), Strata Manufacturing (UAE), Malibu Aerospace (US), FACC AG (Austria), Daher (France) NORDAM (US), Airbus (France), Boeing (US), Avcorp (Canada), and Barnes Group (US), among others, and the innovators of different types of aircraft fairings, such as Royal Engineered Composites (US), Fiber Dynamics Inc. (US), FDC Composites (Canada), and Kaman Aerosystems (US), among others.

Target Audience for this Report:

“This study on the aircraft fairings market answers several questions for stakeholders, primarily which market segments they need to focus upon during the next 2 to 5 years to prioritize their efforts and investments.”

This research report categorizes the aircraft fairings market into the following segments:

Along with the market data, MarketsandMarkets offers customizations as per the specific needs of the companies. The following customization options are available for the report on the aircraft fairings market:

Based on the application, the aircraft fairings market has been segmented into flight control surface, fuselage, wings, nose, landing gear, and other. The fuselage segment is estimated to be the largest in the aircraft fairings market in 2018. The fuselage is the main and central body of a fixed-wing aircraft. It provides space for cargo, controls, accessories, passengers, and other equipment. It includes bulkheads, frames, floor beams, and stringers. In single-engine aircraft, the fuselage houses the power plant, whereas, in multi-engine aircraft, the engines may either be attached to the fuselage, or suspended from the wing structure. 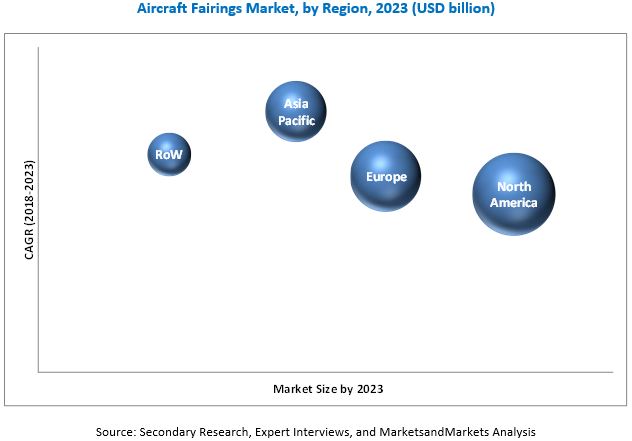 Growing use of Advanced Composite Materials in Aircraft Fairings

Composite materials have become an important component in the construction of aircraft structures. Aircraft parts, such as fairings, spoilers, and flight controls, are made of composite materials for reduced weight. The primary advantages of composite materials include their high strength, relatively low weight, and corrosion resistance. General aviation (GA) has had a long history with composites in flight-control surfaces and some empennage skins, as well as aerodynamic fairings around the wings and stabilizers. These applications represent 6 to 20 percent of an aircraft’s airframe.

UAVs are increasingly used in various commercial and military applications, such as agriculture, real estate, mining, photography, oil & gas, product delivery, greenhouse emission monitoring, and wildlife research & preservation. The agricultural industry has been the largest end user of UAVs. UAVs have revolutionized the precision farming to offer several applications, such as crop health & irrigation equipment monitoring and weed identification, among others.

Reduction in the Cost of Composite Materials