The objective of the report is to define, describe, and forecast the blockchain in telecom market by provider, application, organization size, and region. The report analyzes the opportunities in the market for stakeholders by identifying the high-growth segments of the market. It profiles the key players of the market and comprehensively analyzes their core competencies, such as new product launches, partnerships, agreements, and collaborations. The report also covers detailed information regarding the major factors (drivers, restraints, opportunities, and challenges) influencing the growth of the market.

The research methodology used to estimate and forecast the blockchain in telecom market begins with capturing data from various industry associations and consortiums, such as R3CEV Blockchain Consortium, World Economic Forum, Hyperledger Foundation, Telecom Regulatory Authority of India (TRAI), Groupe Spéciale Mobile Association (GSMA), and other sources, including company financials, journals, press releases, paid databases, and annual reports. The bottom-up procedure was employed to arrive at the overall market size from the revenue of the key players in the market. After arriving at the overall market size, the total market was split into several segments and subsegments, which were then verified through primary research by conducting extensive interviews with key people, such as Chief Executive Officers (CEOs), Vice Presidents (VPs), directors, executives, and blockchain technologists. The data triangulation and market breakdown procedures were employed to complete the overall market engineering process and to arrive at the exact statistics for all segments and subsegments. The breakdown of primary profiles is depicted in the following figure:

Key target audience of the blockchain in telecom market report is given below:

“The study answers several questions for the stakeholders, primarily, which market segments to focus on in the next 2 to 5 years for prioritizing their efforts and investments.”

Scope of the Blockchain in Telecom Market Research Report

The research report segments the market into the following submarkets:

The blockchain in telecom market is expected to grow from USD 46.6 million in 2018 to USD 993.8 million by 2023, at a Compound Annual Growth Rate (CAGR) of 84.4% during the forecast period. The major driving factors in the market are increasing support for Operation Support System/Business Support System (OSS/BSS) processes, and rising security concerns among telcos.

The blockchain in telecom market study aims at estimating the market size and future growth potential of the market across different segments, such as provider, application, organization size, and region. The application segment includes OSS/BSS process, identity management, payments, smart contracts, connectivity provisioning, and others (roaming and digital asset management). The connectivity provisioning segment is expected to grow at the highest CAGR during the forecast period. The connectivity provisioning segment covers 5G enablement, IoT connectivity, and M2M connectivity. With the help of blockchain technology, operators can provide device connection to multiple local hotspots and Wi-Fi based on permission. 5G enablement is also one of the important use cases of blockchain technology. The 3GPP (LTE, GPRS) and non-3GPP (WiMax, WLAN, and Wi-Fi) can be implemented using the blockchain network. 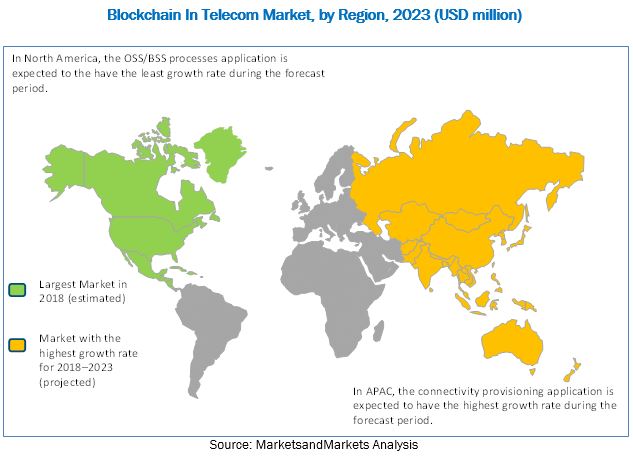 In terms of geographic coverage, the blockchain in telecom market has been segmented into 5 regions, namely, North America, Asia Pacific (APAC), Europe, the Middle East and Africa (MEA), and Latin America. North America is estimated to account for the largest market share in 2018. North America is considered the most advanced region in terms of technology adoption and infrastructure. The wide presence of key industry players of blockchain technology solutions in this region is the main driving factor for the growth of the market. Various telcos in the region are adopting the blockchain technology to reduce identity and roaming frauds and enhance customer experience.

Furthermore, APAC is expected to record the highest growth rate during the forecast period, due to the increase in venture capital funding, significant increase in the number of startups venturing into this market space and governments focusing on regulating the blockchain technology. Major telcos in Japan, Australia and New Zealand, India, and Singapore, provide huge opportunities for the adoption of the blockchain technology.

The major restraining factor in the growth of blockchain in telecom market include growing concerns related to the authenticity of users and uncertain regulatory status and the lack of common standards. Many enterprises believe identity theft done by criminals can help them to gain access of account details and blockchain would not be able to prevent it. Also, there is a notion among enterprises that data confidentiality, integrity, and availability can be affected seriously. Also, government bodies’ restriction in the adoption of blockchain technology and lack of common standards can hinder the growth of market.

The major blockchain in telecom market vendors include AWS (US), Guardtime (Estonia), IBM (US), Microsoft (US), SAP (Germany), Bitfury (US), Cegeka (Netherlands), Clear (Singapore), Reply (Italy), ShoCard (US), Abra (US), Auxesis Group (India), Blockchain Foundry (Singapore), BlockCypher (US), Blocko (South Korea), Blockpoint (US), Blockstream (US), Chain (US), Filament (US), Huawei (China), Oracle (US), RecordsKeeper (Spain), Sofocle (India), SpinSys (US), and TBCASoft (US). These players majorly adopted partnerships and new product launches as the key growth strategies to offer feature-rich blockchain in telecom solutions to their customers and further penetrate into regions with unmet needs.

Growth opportunities and latent adjacency in Blockchain in Telecom Market 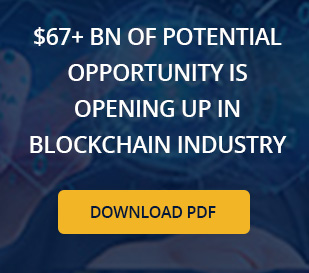 $67+ BN OF POTENTIAL OPPORTUNITY IS OPENING UP IN BLOCKCHAIN INDUSTRY