“High volume of genetic screening tests to screen cancer, fetal abnormalities, and other genetic anomalies. The increasing trend of next generation screening for various research studies, personalized medicines and direct-to-consumer genetic testing are pushing the growth of the Genetic Testing Market.”

The global Genetic Testing Market is expected to reach USD xx billion by 2027 from USD xx billion in 2022, at a CAGR of xx%. The growth in this market is driven by the increasing prevalence of the genetic disorders, increasing cases of cancer, and genetic anomalies in newborn. The increasing awareness of genetic testing for screening cancer, pre-natal genetic screening of the increasing use of next generation sequencing (NGS) for the studies of various genetic diseases are pushing the growth of the market. 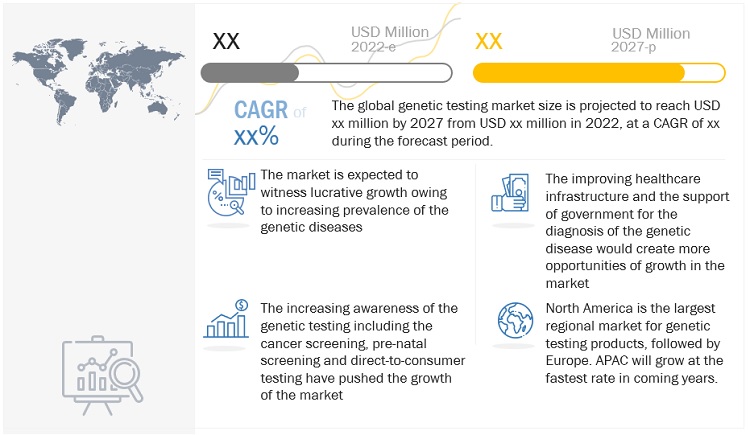 “The consumables segment held the largest market share in 2021.”

Based on product, the Genetic Testing Market is segmented into consumables, equipment, software and services. The consumable segment held the largest share in 2021, which is driven by the high volume of consumables consumed in the genetic tests.

“The next generation sequencing segment is accounted for the largest share in 2021.”

Based on the technology, the Genetic Testing Market is segmented into Next-Generation Sequencing, Polymerase Chain Reaction, Fluorescence in Situ Hybridization, Chemiluminescence Immunoassay, and Other Technologies. The Next generation Sequencing segment is held the largest share owing to its increasing usage for the detection, studies and management of genetic disorders.

“Asia Pacific is estimated to register the highest CAGR during the study period. North America is expected to dominate the market share”

Asia Pacific Market is expected to grow at the fastest CAGR during the forecast period of 2022 to 2027, this is attributed to the vast geriatric popualtion, expaniding population base, huge volume of genetic testing due to the massive prevalance of genetic diseases, increasing use of genetic tests for cancer screening, pre-natal screening and other genetic anomalies.