According to MarketsandMarkets, the global Plant-based butter market is estimated to be valued at USD 2.0 billion in 2022. It is projected to reach USD 2.5 billion by 2027, with a CAGR of 4.9%, in terms of value between 2022 and 2027. Major drivers of the market include rising awareness regarding social and environmental values, which plant-based butter offers, thereby creating opportunities for labels, such as clean label and organic plant-based. 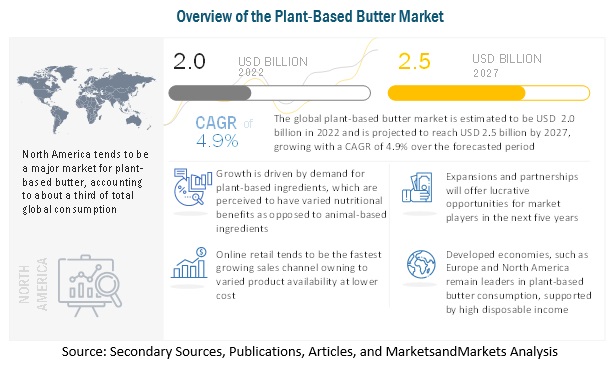 Drivers for plant-based market include social media influencers who tend to coax consumers to using plant-based ingredients in their home cooked foods. This is followed by them educating consumers about the nutritional content in plant-based butter, besides speaking about the negative effect of animal-based products on animals and the environment in general.

Restraints: Protection and nurturing the bees turns out to be the biggest constraint

Opportunities:  Leveraging the labels such as organic and plant-based

Plant-based products are increasingly labelled ‘organic’, ‘plant-based’, ‘non-GMO’, amongst other trending labels. This therefore is expected to be an opportunity for plant-based butter as well, wherein labelling the products with such certifications increases their market value and presence.

Challenges: Taste remains a key challenge, wherein plant-based butters are yet to mimic animal-based ones

Adoption of plant-based butter is hindered by its flavour, which is yet to match that of animal-based butter, and thereby which is creating a hurdle to its market acceptance. However, there is an increase in investments in research around flavour. One such development was made by DTU National Food Institute in Denmark, where the researchers were able to develop natural butter flavour from plant-based butter sources.

By source, oats-based plant-based butter is projected to witness the fastest growth rate during the forecast period.

Oats-based plant-based butter is expected to gain fastest traction in B2C sales channel. This is owing to rising popularity of its linked product, oat milk. Further, brands, such as Miyoko have been labelling their plant-based butter products as ‘gluten free’, ‘non-GMO’, ‘soy free’, etc., which further increases the demand of oats-based butters, albeit through such brands.

By flavor, flavor segment is expected to showcase the fastest growth.

North America tends to be a major market for plant-based butter products, accounting to about a third of total global consumption. The region is especially led by the US, wherein the country has consistently showcased double digit growth in the historical period.

Key players in this market include Forager Project (US), Goodmylk (US), JEM Organics (US), Milkadamia (US), Nuts For Cheese (Canada), among others.

Note: Currently, list of only 9 companies have been provided. However, this section covers 12-15 key company profiles which include business overview, recent financials, product offerings, key strategies, and swot analysis. recent financials can be provided-based on data/information availability in public domain. The list of companies mentioned above can be altered depending upon client’s interest

13 APPENDIX
Note: The TOC prepared above is tentative and may subject to change, based on the research progress