The Space 3D Printing market is projected to grow from USD XX million in 2022 to USD XX million by 2027, at a CAGR of XX.X% from 2022 to 2027. Space 3D Printing, also known as additive manufacturing, is a process of creating three-dimensional objects from a digital file using various materials, such as steel alloys, aluminum, titanium, plastics, nickel, and ceramics. Initially, 3D printing technology was employed by the space industry to manufacture prototype component parts of aircrafts, but it is presently being adopted in various applications for manufacturing space components. 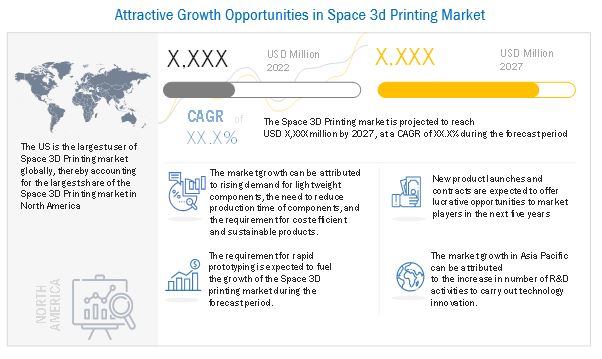 13 COMPANY PROFILE
13.1 MTU AERO ENGINES AG
13.2 STRATASYS LTD.
13.3 ULTIMAKER B.V.
13.4 3D SYSTEMS CORPORATION
13.5 ARCAM AB
13.6 THE EXONE COMPANY
13.7 HÖGANÄS AB
13.8 EOS GMBH
13.9 MATERIALISE NV
13.1 ENVISIONTEC GMBH
13.11 NORSK TITANIUM AS
13.12 AEROJET ROCKETDYNE
*Details on Business Overview, Products Offered, Recent Developments, SWOT Analysis, MnM View might not be captured in case of unlisted companies.
** Only few key players are mentioned above, however top 25 key players will be profiled during the course of research study
*** The above tentative TOC is based on preliminary secondary data and could improve based on primary data in the course of research study
**** All segments above will be further assessed & considered to be a part of market breakdown. The breakdown of segments will be finalized during the course of research.
***** Request for addition of company profiles or countries in the scope can be considered and included post feasibility