[131 Pages Report] The overall version control systems market expected to grow $438.8 million in 2018 to $716.1 million by 2023, at a CAGR of 10.3% from 2018 to 2023. Version control systems allow the entire development team to work collaboratively by providing the log of every change in the software; thereby reducing the complexity of software development process. This is acting as the major driver for the growth of the market. In addition, factors such as the increasing demand for automation and digitalization in the software development process as well as the continuously growing adoption of smartphones and tablets are spurring the adoption of version control systems. The base year considered for the study is 2017, and the forecast has been provided for the period between 2018 and 2023. 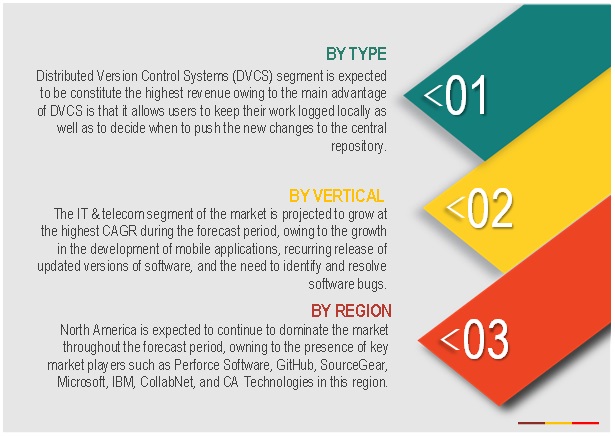 During this research study, major players operating in the version control systems market in various regions have been identified, and their offerings, regional presence, and distribution channels have been analyzed through in-depth discussions. Top-down and bottom-up approaches have been used to determine the overall market size. Sizes of the other individual markets have been estimated using the percentage splits obtained through secondary sources such as Hoovers, Bloomberg BusinessWeek, and Factiva, along with primary respondents. The entire procedure includes the study of the annual and financial reports of the top market players and extensive interviews with industry experts such as CEOs, VPs, directors, and marketing executives for key insights (both qualitative and quantitative) pertaining to the market. The figure below shows the breakdown of the primaries on the basis of the company type, designation, and region considered during the research study. 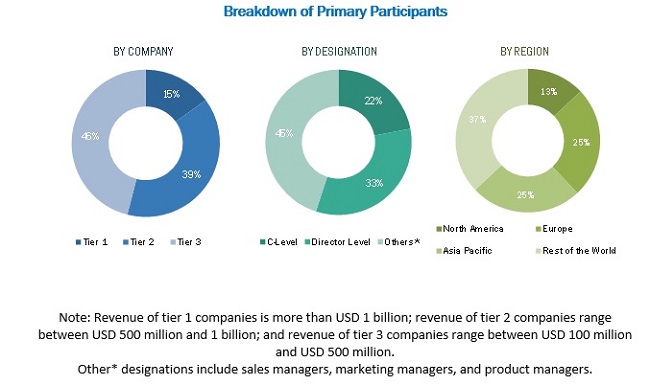 The research report categorizes the Version Control Systems Market to forecast the revenues and analyze trends in each of the following subsegments:

The overall version control systems market is expected to grow from USD 438.8 million in 2018 to USD 716.1 million by 2023, at a CAGR of 10.3% from 2018 to 2023. Increasing need to reduce complexities in software development; increasing demand for automation and digitalization tools; and continuously growing adoption of smartphones and tablets  are the key factors driving the growth of this market.

The distributed version control systems market is expected to grow at the highest CAGR between 2018 and 2023. DVCS offer various advantages over CVCS, so the customers are gradually shifting from CVCS to DVCS. DVCS such as Git are considerably faster and easier to work with when it comes to creating and merging branches and tags. They also allow for flexible workflows, tailored to user’s project and the developer team needs.

The version control systems market in APAC is expected to grow at the highest CAGR during the forecast period. This growth will likely be driven by factors such as increased spending on improving infrastructures, the emergence of advanced & secured cloud-based solutions, tax reformation policies, smart city initiatives, and digitalization in the region. The small & medium enterprises (SMEs) across various Asia Pacific countries, such as Australia, Malaysia, Japan, and Singapore, are investing in Information Technology (IT) to compete, secure, and capture digital opportunities in the Asia Pacific market. The investment in IT by these countries will contribute significantly to the growth of the Asia Pacific market 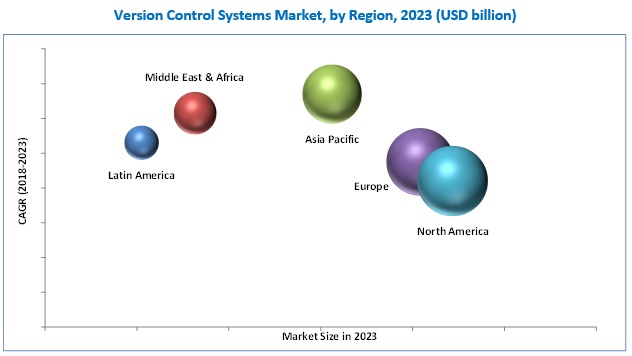 There is a rapid adoption of version control systems in the banking, financial services & insurance (BFSI) vertical. BFSI organizations rely on software and mobile applications to execute customer queries and other financial activities. The high dependency on software will require the banks to upgrade various software and applications so that the most recent transactions and data reflect at numerous branches simultaneously. BFSI organizations need version control systems to track the old versions of software and provide upgraded versions of the same. Version control systems providers offer software development services in conjunction with the operational requirements of BFSI organizations. They work on the current version of the software while updating the same to ensure availability and access to data and transaction status to employees/customers. With the evolution of customer requirements and increasing number of mobile applications users, there is a sudden growth of cyber-attacks at user mobile application side.

Many retail and consumer packaged goods companies have a decentralized business model with multiple facility locations and distribution centers, enabling them to put their products closer to their customers. Multiple locations, however, means that the compliance team is not involved in the facility management and the day-to-day operations. As a result, they face unique challenges as they seek to establish and enforce policies, procedures, contracts, and employee training under the given operating conditions while meeting regulatory guidelines. According to the changing consumer needs, these companies continuously update their website content and mobile applications. Version control systems track these updates and changes. For better change management, enterprises in the retail & CPG industry vertical are adopting version control systems.

The rise in demand for artificial intelligence and machine learning technology will gradually increase the deployment of various software and applications in the healthcare & life sciences vertical. Use of solutions such as mHealth, smartphone applications, and wearable technology products are leading to a rise in the demand for latest versions of different software. The healthcare & life sciences vertical software store crucial patient and drug information. These software need to be secured from cyberattacks. Healthcare organizations use software such as disease identification, personalized treatment, drug discovery, radiotherapy, medical devices, electronic health records (EHRs), mobile devices, and health information technology (HIT) systems. These software require consistent patches and regular updates. Software updates and management of the latest versions of software is accomplished through version control systems. The other benefits of these solutions include simplified work processes, real-time software upgrades, interoperability between software, and value-based delivery model.

Use of diverse applications in IT organizations is one of the major factors restraining the growth of the market. The structure of IT organizations is transforming with the shift from traditional business processes to several automated applications to increase efficiency. This leads to increased complexities in managing the versions of various software used in an organization. With such a diverse IT infrastructure, it would also become more challenging to identify the authenticity of users accessing different applications from several vendors while performing change management.

*Details on Business Overview, Products/Solutions/Services Offered, Recent Developments, SWOT Analysis, and MnM View Might Not Be Captured in Case of Unlisted Companies.