[104 Pages Report] Drilling activity plays a crucial role in oil & gas exploration and production (E&P). It is essential to have a suitable waste management solution that safeguards the environment for drilling processes. The increase in E&P activities is creating promising opportunities for the drilling waste management market.

The oil & gas drilling process generates two basic types of drilling waste: drilling cuttings and used drilling fluids. Drilling cuttings are rock fragments that are returned to the surface with the drilling fluid. The drilling fluid can be categorized primarily into aqueous and non-aqueous fluids. Non-aqueous fluids comprise primary fluid such as synthetic oil or refined oil. Various countries have different regulatory measures to tackle environmental challenges arising from the disposal of waste, thereby ensuring the growth of the drilling waste management market. Oil & gas operators across the globe follow a three-tiered waste management hierarchy to control and manage drilling wastes in the most eco-friendly manner possible. These three stages (from most preferred to least preferred) are waste minimization, recycling/reuse, and treatment & disposal.

Countries considered for the study:

The report has been segmented as follows:

With the regulatory data provided above, MarketsandMarkets offers customizations as per the company’s specific needs. The following customization options are available for this report:

The growing global energy demand has resulted in a rise in oil & gas production in regions such as North America and the Middle East, leading to an increase in exploration & production (E&P) activities in these regions. Drilling activity plays a crucial role in oil & gas E&P. The rise in drilling activities has resulted in an increasing amount of waste produced while drilling. This waste primarily comprises drilling mud and cuttings. It is essential to have a suitable waste management solution that safeguards the environment for drilling processes.

In the report, waste regulations for drilling muds and cuttings have been segmented on the basis of muds used for drilling purposes into non-aqueous muds and aqueous muds. Non-aqueous muds are further divided according to primary base fluids into oil-based and synthetic-based. The report outlines the drilling waste management hierarchy, whereby fluids produced are treated using various processes such as waste minimization, recycling/reuse, and treatment & disposal. Numerous technologies, including thermal incineration, thermal desorption, bioremediation, vermiculture solvent extraction using supercritical CO2, onsite burial, land spray, and land filling, have also been analyzed, along with their advantages and disadvantages. Treatment & disposal services, which include services such as onsite burial (pits, landfills), land farming, land spreading, bioremediation, thermal treatment, and slurry injection, account for nearly two-fifth of the drilling waste management market. North America is estimated to occupy the largest market share in the global drilling waste management services market. The recent slump in crude oil prices has had no effect on the disposal regulations of the country. 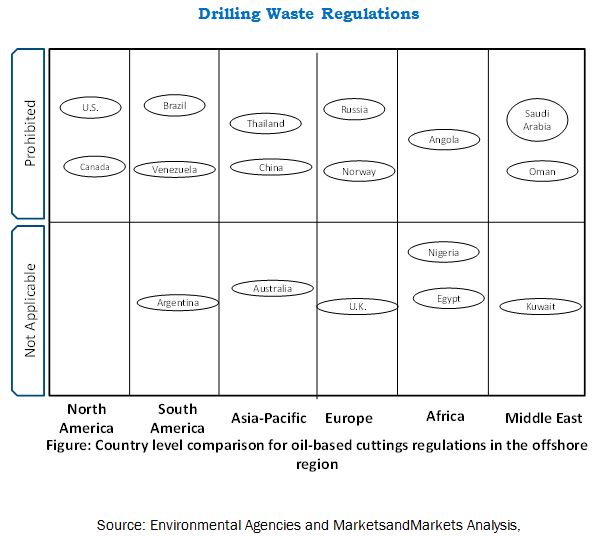 The report also provides a detailed description of various technologies used in different countries, and lists the key players for the technology. Major players in each region have also been profiled. Additionally, companies such as Schlumberger Ltd. (U.S.), Halliburton (U.S.), Baker Hughes (U.S.), Weatherford International (U.S.), National Oilwell Varco (U.S.), SAR AS (Norway), Egyptian Mud Engineering and Chemicals Company (EMEC) (Egypt), and Step Oil Tools (The Netherlands) have been analyzed. The vendor selection matrix included in the report mentions the equipment provider, the service provider, and players providing both, equipment and services. In addition to the key players, important organizations regulating the various disposal & discharge regulations in countries have been profiled.