[185 Pages Report] Asia Pacific electric three-wheeler market is estimated to be 156,397 units in 2021 and is projected to grow to 486,446 units by 2026, at a CAGR of 25.5% during the forecast period. The three-wheeler industry has witnessed rapid evolution with ongoing developments in engineering and technology. Technological advancements, such as the inclusion of simulation software, reality tools, telematics unit, and GPS system, and the emergence of disruptive trends, such as the use of energy-efficient electric propulsion and innovative battery technologies, have boosted the demand for electric three-wheelers. With the increasing stringency of government mandates, the focus of three-wheeler manufacturers has shifted to efficiency, emission-free propulsion, innovative technologies, and revised environmental standards. The increasing adoption of electric three-wheelers and improved charging infrastructure (in terms of network and capacity) in countries will change the market scenario in the coming years. 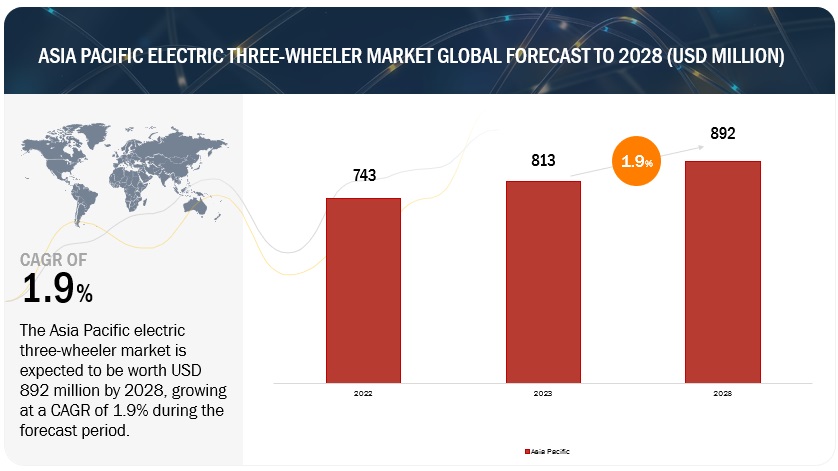 Asia Pacific electric three-wheeler sales declined by 14.4% between 2019 and 2020 (as per MarketsandMarkets study), the sales outlook was supposed to showcase significant growth from 2021ñ22 due to multiple steps taken by governments to boost production. For instance, the Government of China has started ìMade in China 2025î, which backs companies in the country to compete with regional players. Bangladesh and India, which account for a large share of the Asia Pacific electric three-wheeler production, will observe a decline of 15.0% and 13.8%, respectively, in 2020 compared to 2019.

One of the most important factors driving the electric three-wheeler market is the increasing prices of petroleum products. Consumers from emerging countries are already affected by the increasing costs of petrol and diesel. Electrical three-wheelers operating on electricity significantly reduce the operating cost of these vehicles. Manufacturers are working towards developing three-wheelers that have a higher range than the current models. As they have a lower number of moving parts than conventional three-wheelers, maintenance too is not a major concern. The highest maintenance cost is expected to be the cost of changing the battery, which, however, is not frequent.

Moreover, electric three-wheelers provide zero tailpipe emissions and noise-free transportation. The three-wheelers with carrying capacity of between three to seven people provide mobility solutions for short trips up to 10ñ12 km, for first and last mile connectivity and as feeder services to the main haul public transport. The electrification of three-wheelers is expected to result in lower operation and maintenance costs as compared to Internal Combustion Engine (ICE) vehicles, making them economically viable. This is driving the market for electric three-wheelers in the Asia Pacific region.

The largest hurdle in the growth of the electric three-wheelers market is expected to be the lack of charging infrastructure. For any user, the most important concern before buying an electric three-wheeler is expected to be the convenience of charging the vehicle anywhere and anytime. Unlike developed countries, most of the emerging countries in the Asia Pacific lack the necessary charging facilities. A widespread and extensive charging infrastructure network is needed to ensure the seamless growth of the electric three-wheeler market. To accelerate electric mobility, the Government of Indiaís Phase-II of the FAME scheme created growth opportunities for EVs through demand incentives and charging infrastructure programs. FAME II planned to install 2,636 charging stations in 62 cities across 24 states and union territories in 2020, which is expected to be delayed in the short-term due to the pandemic-related economic downturn.

The Asia Pacific is a high-growth market for electric three-wheelers. Several countries in the region have a high penetration of three-wheelers and have witnessed a surge in demand for low-emission and fuel-efficient commuting alternatives due to stringent emission norms and increasing crude oil prices. Bajaj Auto is commercially launching its first electric three-wheeler during the second half of the 2022 financial year. This showcases that the demand for efficient and affordable electric three-wheelers is expected to grow significantly in the Indian market. OEMs are entering into strategic partnerships to strengthen their bases in the electric three-wheeler market. For instance, Kandi Technologies Group, Inc. entered into a strategic cooperation agreement with the Jiangsu Jinpeng Group Ltd. to jointly develop pure electric vehicles (EVs) in China. Both companies are expected to make use of their respective advantages to jointly develop several pure EV models that meet Chinaís ride-sharing market demands as well as consumer needs from the US and other overseas markets. The market in the Asia Pacific is expected to grow exponentially in the coming years due to the high adoption of electric three-wheelers in China and the high potential of the Indian market.

Growth opportunities are also available in Bangladesh, Nepal, Sri Lanka, Thailand, the Philippines, Indonesia, and Singapore. These countries are expected to witness a rapid increase in demand for electric three-wheelers due to government incentives and the presence of supporting infrastructures such as free charging stations and large networks of charging points.

India is the largest market in the region, followed by Bangladesh and the Philippines. India is the largest market in the region due to its government policies to support the adoption of electric three-wheelers. In August 2020, the government introduced the new Delhi Electric Vehicle Policy, 2020, intending to increase the adoption of EVs in the national capital region. The new policy proposed tax waivers, charging and swapping infrastructure establishment, battery cycling ecosystem, and creating a non-lapsable State EV Fund. In 2019, Delhi proposed open permits for electric three-wheelers. Moreover, India already has a well-established market for three-wheelers. This is because of the countryís high taxes on petrol, which increases the demand for alternative fuel vehicles. The governmentís new vehicle scrappage policies will also support the growth of electric three-wheelers, besides lowering the cost by providing subsidiaries in the country. In 2020, the purchasers of e-carriers were eligible for a scrapping incentive for scrapping and then registering the old ICE goods carriers registered in Delhi. Up to ~USD 104 (INR 7,500) of the incentive shall be reimbursed by the GNCTD for the purchase of e-carriers

This research report categorizes the electric three-wheeler market based on type, number of axles, tonnage, length, end-use and region

What are different segment covered in report for Asia Pacific electric three-wheeler market?

Who are the major players in the electric three-wheeler market?

What is the Covid-19 impact on electric three-wheeler manufacturers?

What are the new market trends impacting the growth of the electric three-wheeler market?

The three-wheeler industry has witnessed rapid evolution with ongoing developments in engineering and technology. Technological advancements, such as battery swapping, use of high-performance sbattery, high motor power have boosted the demand for electric three-wheelers.

Which countries are considered in the Asia Pacific region?

The study involved four major activities in estimating the current size of the electric three-wheeler market. Exhaustive secondary research was done to collect information on the market, the peer market, and the parent market. The next step was to validate these findings, assumptions, and sizing with the industry experts across value chains through primary research. The top-down and bottom-up approaches were employed to estimate the complete market size. Thereafter, market breakdown and data triangulation processes were used to estimate the market size of segments and subsegments.

Extensive primary research was conducted after acquiring an understanding of the electric three-wheeler market scenario through secondary research. Several primary interviews were conducted with market experts from both the demand (electric three-wheeler manufacturers, country-level government associations, and trade associations) and supply (OEMs and component manufacturers) sides across major countries, namely, India, Nepal, Japan, and Bangladesh, and primary interviews were conducted from the demand and supply sides, respectively. Primary data was collected through questionnaires, emails, and telephonic interviews. In the canvassing of primaries, various departments within organizations, such as sales, operations, and administration, were covered to provide a holistic viewpoint in this report.

After interacting with industry experts, brief sessions with highly experienced independent consultants were conducted to reinforce the findings from primaries. This, along with the in-house subject-matter expertsí opinions, has led to the findings described in the remainder of this report.

A detailed market estimation approach was followed to estimate and validate the volume of the electric three-wheeler and other dependent submarkets, as mentioned below:

After arriving at the overall market size-using the market size estimation processes as explained above-the market was split into several segments and sub-segments. To complete the overall market engineering process and arrive at the exact statistics of each market segment and sub-segment, data triangulation, and market breakdown procedures were employed, wherever applicable. The data was triangulated by studying various factors and trends from both the demand and supply sides.

With the given market data, MarketsandMarkets offers customizations in line with company-specific needs.

Asia Pacific Electric 3-Wheeler Market
Published Date: Mar 2021 | Report Code: AT 7860
Inquiry Before Buying Request Sample
REQUEST FORM
By clicking the "Submit" button, you are agreeing to the Terms of Use and Privacy Policy.