[131 Pages Report] The blockchain technology in insurance is a decentralized and shared digital distributed ledger that records and provides the history of an individual’s transactions, including claims, thus helping insurers prevent, detect, and counter frauds. The blockchain technology offers smart contracts for insurers and customers for managing claims transparently and responsively. Insurance companies have begun testing and proving out new models based on blockchain technology, starting with the low-risk, internal prototypes, and the pilot projects within their infrastructure.

The blockchain in insurance market size was valued at USD 64.50 million in 2018 and projected to reach USD 1,393.8 million by 2023, at a Compound Annual Growth Rate (CAGR) of 84.9%. The major growth drivers of the market include the emerging need to have transparent and trustworthy systems, and the overall trends witnessed in the insurance sector related to increase in claims-related frauds. The base year considered for this report is 2017, and the market forecast period is 2018–2023. 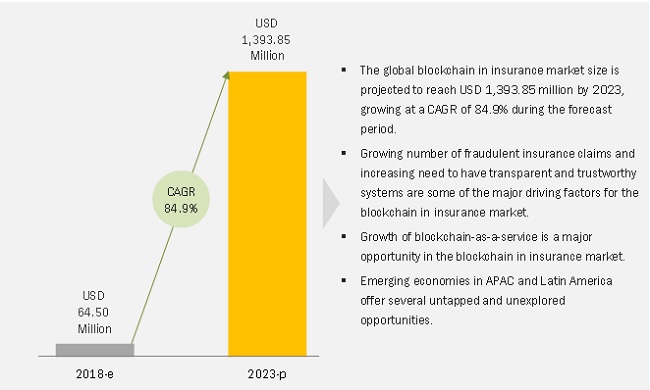 The insurance industry is one of the most vulnerable sectors subject to various frauds and data thefts. Implementing blockchain in insurance is one of the novel ways to reduce fraud, minimize risks, and increase customer satisfaction. Fraudulent activities in the insurance industry are increasing. Hence, it makes a compelling reason to adopt the blockchain technology in its processes. As a result, insurance companies have to replace their inefficient legacy systems integrated in the insurance systems with better systems for efficient prevention of fraudulent claims. Blockchain offers decentralized public ledger across multiple untrusted parties. Thus it could be used to eliminate errors and identify fraudulent activities. Validation is at the core of the blockchain technology, which can be used to verify the authenticity of insurance customers’ policies by providing a complete historical record of a policy holder’s past transactions. Hence, blockchain technology offers improved efficiency in detecting and preventing fraud.

Regulatory authorities find it difficult to cope with advancements in technologies. With such technological advancements, regulatory bodies need to understand what the current regulations lack and how the rules can impact the overall technology applications. Uncertainties in regulations remain a concern in the blockchain in the insurance market. At present, the lack of regulations is likely to restrain the adoption of blockchain technology in most application areas, such as financial services, telecom, government, and retail. The adoption of blockchain technology in the insurance vertical is affected by uncertain regulations and the lack of common standards for drafting the transactions of cryptocurrencies on the blockchain technology. Significant blockchain associations and consortiums, including Hyperledger, R3CEV Blockchain Consortium, CU Ledger, and Global Payments Steering Group (GPSG), have their own sets of standards and codes.

Blockchain is poised to grow at a very rapid pace, especially in the BFSI vertical. The growth of the technology is expected to provide unprecedented opportunities to blockchain service providers to customize their solutions and offer to such banks. Witnessing the extraordinary growth of BaaS, several IT giants, such as IBM, Oracle, and Microsoft, have started offering BaaS modules to their cloud-computing platform. Moreover, the report also estimated that the BFSI vertical would hold the lion’s share in the global BaaS market in 2018.

Challenge: Lack of awareness about the blockchain technology

Blockchain technology is still in its nascent stage, with few applications getting traction among the industry verticals. Although the insurance industry has shown a positive trend in the adoption of technology, a lot needs to be done in terms of spreading awareness about the DLT and its diverse application areas in the insurance industry. The lack of awareness is one of the foremost challenges. Hence, it needs to be addressed swiftly. Blockchain use cases with its successful implementation stories could potentially build up the momentum of adoption by the insurance industry. Insurance companies are grappling with frauds, risk, compliance, and security issues, which could be addressed through the successful implementation of blockchain technology. Thus, creating awareness could drive the growth of blockchain technology adoption.

The research report categorizes the Blockchain in Insurance Market to forecast the revenues and analyze trends in each of the following sub-segments:

Key questions addressed in the report

Growth opportunities and latent adjacency in Blockchain In Insurance Market