The Indian government aims to build a domestic industrial base by encouraging procurement of indigenously manufactured or developed technology and weapons systems, under its Make in India initiative. It has also revised the Defense Procurement Procedure (DPP). Original equipment manufacturers and their suppliers are expected to fulfil offset obligations and take advantage of India’s competitive advantages in manufacturing and information technology by setting up manufacturing facilities in the country. A large number of Indian private companies and publicly funded research laboratories are looking to enter the Indian defense sector.

The report explains the defense procurement policy followed by the Indian government along with inventory assessment of various weapons possessed by the Indian armed forces. It also maps the technological capability in addition to profiling the key players in the market. India is likely to be one of the largest spenders on defense equipment, thereby attracting the interest of various major defense players. The spending on purchase of equipment along with upgrading programs is likely to increase further over the next decade. This is expected to bolster the development of the domestic defense industry owing to offsets requirement on defense purchases from global players. 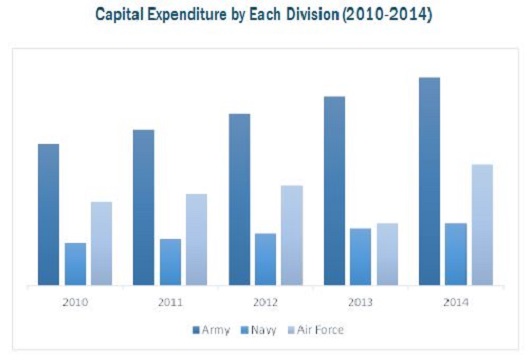 India’s high defense spending along with the government’s ‘Make in India’ initiative are expected to encourage the entry of domestic players in the country’s defense sector. The procurement of new equipment and technology in the coming years along with massive upgrade programs is likely to open up a huge market for all stakeholders including global original equipment manufacturers (OEMs), defense public sector units (DPSUs), ordnance factory boards (OFBs) and domestic private sector players.

The status of the inventory held by the Indian armed forces was assessed through extensive secondary research and corroboration with primaries. Furthermore, secondary research has been mainly used to obtain key information about the defense sector’s supply chain, market dynamics, key players, and industry trends as well as the impact of government policy on the procurement of defense equipment.

The ecosystem of the Indian defense sector comprises the Indian government, Indian armed forces, defense public sector undertakings (DSPUs), Ordnance Factory Boards (OFBs), private companies, and medium, small, and micro enterprises (MSMEs). This report would help equipment manufacturers, suppliers, and sub-component manufacturers to identify opportunities for investment in the Indian defense sector.Furthermore, this study answers several questions for the stakeholders; primarily which segments to focus over the next five years for prioritizing efforts and investments.

With the given market data, MarketsandMarkets offers customizations in accordance to company-specific needs.

The Indian Ministry of Defense has been focusing on filling the gaps in the inventory held by Indian armed forces. It has also been focusing on encouraging procurement of defense equipment from indigenous manufacturers. It has initiated the process of signing various contracts with the private sector under the Buy-Make category of the DPP. This is also expected to lead to various partnerships between the Indian companies and global Original Equipment Manufacturers (OEMs) to meet this demand.

India’s high defense spending along with the government’s ‘Make in India’ initiative are expected to encourage the entry of domestic players in the country’s defense sector. The procurement of new equipment and technology in the coming years along with massive upgrade programs is likely to open up a huge market for all stakeholders including global original equipment manufacturers (OEMs), defense public sector units (DPSUs), ordnance factory boards (OFBs) and domestic private sector players.

Some of the key procurements by the Indian government include medium multi-role combat aircraft, artillery guns in the 155 mm category and light combat aircraft among others. The Indian Air Force is also aiming to increase its number of squadrons by procuring more fighter aircraft. The Indian navy aims to acquire indigenous capability in design, development and construction of ships and submarines as espoused in its long-term perspective program.

The offset requirements as stipulated by the Indian government for the foreign players could present a challenge for foreign players as domestic companies do not have the adequate manufacturing capabilities. However, various large players such as Mahindra & Mahindra and TATA group have been setting up manufacturing facilities in order to cater to the potential rise in demand for indigenous defense equipment. 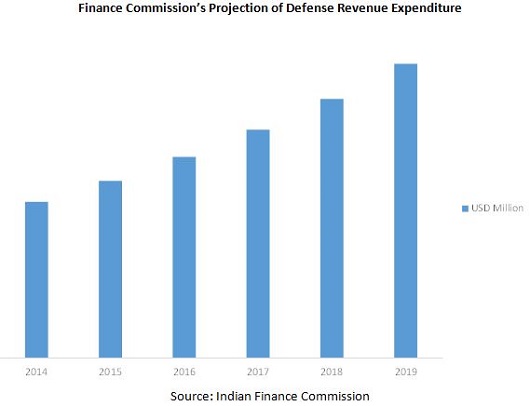 Some of the major domestic private players in the Indian defense sector include Ashok Leyland, Bharat Forge, Larsen & Toubro, Mahindra & Mahindra, Reliance Industries, and TATA group among others.

Mahindra & Mahindra operates in the defense sector through its subsidiaries which include Defense Land Systems India (DLSI), Mahindra Defense Systems (MDS), Mahindra Defense Naval Systems (MDNL) and Mahindra Special Service Groups (MSSG). The company has been focusing on entering into joint ventures to expand its product portfolio of weapons systems.

The TATA group is a major player which also caters to the Indian defense sector through its various holding companies which include Tata Advanced System, Tata Power SED, Tata Motors, and Tata Advanced Materials (TAML) among others. These companies have been focusing on entering into joint ventures with various overseas equipment manufacturers, such as helicopter maker Sikorsky, Lockheed Martin, and Israel's Elta Systems.