[67 Pages Report] The overall injector nozzle market is expected to grow from USD 3.95 billion in 2015 to USD 5.33 billion by 2020, at a CAGR of 6.2% from 2015 to 2020. Technologies such as port fuel injection system and direct injection system have helped the automobile industry deal with varied key issues related to maintaining balance between fuel economy, power, and exhaust emission. A fuel injection system offers faster throttle response, better fuel flow, precise control of the air-fuel mixture, and equal distribution of fuel. These parameters help vehicles attain a higher fuel economy at an optimum power, lower exhaust emissions, smoother acceleration, and increased operational reliability. Hence, Injector nozzle pumps the right proportion of fuel and air that is necessary for the engine to continue running at maximum efficiency. Also, government authorities as well as private organizations have started demanding products that are fuel-efficient, reliable, eco-friendly, possess low maintenance costs, and also have the ability to accommodate alternative fuels. The base year considered for the study is 2014, and the forecast has been provided for the period between 2015 and 2020.

Over the past few years, the awareness for conservation of conventional fuels is increasing in urban societies. In recent years, many automobile companies are primarily focused on manufacturing advanced fuel injection systems that would help consumers save money on fuel usage. The main emphasis is to design highly fuel-efficient automobile engines that stabilize emission. Injector nozzles help automobile engines maintain the right proportion of fuel and air, being injected into the combustor, thereby preventing overheating of the engine. In India, from April 2017, cars and utility vehicles are expected to deliver 18.2 km/liter, which is a 15% increase over the existing average mileage. To fulfil this requirement, automobile manufacturers are ensuring the average fuel efficiency of all models manufactured to be at least 18.2 km/liter. Moreover, the new regulations imposed by the Organization of the Petroleum Exporting Countries (OPEC) have restricted the extraction and export of crude oil, in turn, creating a demand for fuel-efficient vehicles. Therefore, the necessity for fuel-efficient vehicles has further propelled the growth of the injector nozzle market. 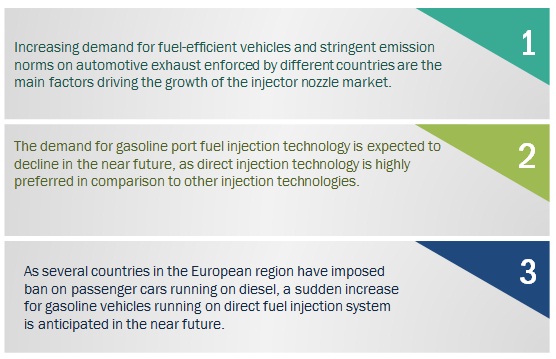 During this research study, major players operating in the injector nozzle market in various regions have been identified, and their offerings, regional presence, and distribution channels have been analyzed through in-depth discussions. Top-down and bottom-up approaches have been used to determine the overall market size. Sizes of the other individual markets have been estimated using the percentage splits obtained through secondary sources such as Hoovers, Bloomberg BusinessWeek, and Factiva, along with primary respondents. The entire procedure includes the study of the annual and financial reports of the top market players and extensive interviews with industry experts such as CEOs, VPs, directors, and marketing executives for key insights (both qualitative and quantitative) pertaining to the market. The figure below shows the breakdown of the primaries on the basis of the company type, designation, and region considered during the research study 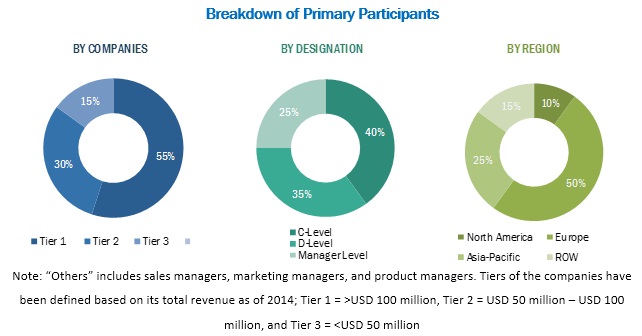 The overall injector nozzle is expected to grow from USD 3.95 billion in 2015 to USD 5.33 billion by 2020 at a CAGR of 6.2%. Increasing need to conserve conventional fuel, rising demand of fuel-efficient vehicles, and significant growth in the passenger cars segment are factors driving the growth of the market. In the emerging economies, gasoline prices are higher than diesel, owing to which the demand for diesel engines is projected to increase in the future. However, advancements in gasoline engine (gasoline direct injection) have increased its fuel-efficiency, thereby making them compatible with diesel engines.

Future emission legislations will require substantial reduction of smoke emissions from engines, such as carbon monoxide (CO), sulfur dioxide (SO2), and mono-nitrogen oxides (mainly NO and NO₂ ), among others. Therefore, government authorities as well as private organizations have started demanding products that are fuel-efficient, reliable, eco-friendly, possess low maintenance costs, and also have the ability to accommodate alternative fuels. Several emerging economies are focused on implementing stringent emission norms to reduce air pollution. For instance, the European Union has implemented Euro 6 for gasoline passenger cars, and this is further expected to become a mandate for all regions worldwide.

The injector nozzle market has been segmented, on the basis of fuel type, into gasoline, and diesel. The market for diesel is expected to grow at the highest CAGR between 2015 and 2020. As diesel engines have high thermal energy, they offer better fuel efficiency in comparison to gasoline. Diesel contains about 15% more energy (approximately 36.9 MJ/liter as compared to 33.7 MJ/liter in gasoline) than gasoline. Even though diesel engines are heavier, the overall efficiency of a diesel engine is roughly 20% greater than that of a petrol engine owing to the aforementioned reasons. Improvements in the diesel engine technology have managed to decrease engine noise, as well as exhaust emissions with improved fuel efficiency. This has led to consumers preferring vehicles with diesel engines and manufacturers focusing on the production of diesel engines. 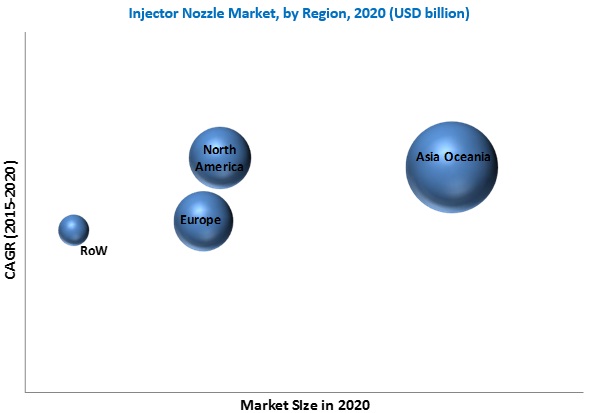 Gasoline direct injection (GDI) is an advanced version of port fuel injection system. The point at which fuel is added to the intake port has further moved closer to the combustion chamber. In this injection system, fuel is injected directly into the combustion chamber for each cylinder instead of the intake port. Better dispersion and homogeneity of fuel improve the compression ratios of engine resulting in enhanced power output with increased fuel efficiency. Precise management of gasoline allows complete combustion of the fuel, leading to improved emission control.

*Details on Overview, Financials, Product & Services, Strategy, and Developments Might Not Be Captured in Case of Unlisted Companies.