[97 Pages Report] Ionic Liquids Market size is estimated to reach USD 39.6 Million by 2021 at a CAGR of 9.2% between 2016 and 2021. The report segments the market based on application (solvents & catalysts, process & operating fluids, plastics, batteries & electrochemistry, and bio-refineries), and region (Asia-Pacific, North America, Europe, and RoW). The base year considered for the study is 2015, while the forecast period is between 2016 and 2021.

Top-down and bottom-up approaches have been used to estimate and validate the size of the global market and estimate the sizes of various other dependent submarkets in the overall ionic liquids market. The research study involved extensive use of secondary sources, directories, and databases such as Hoovers, Bloomberg, Chemical Weekly, Factiva, and other government and private websites to identify and collect information useful for the technical, market-oriented, and commercial study of the global ionic liquids market. 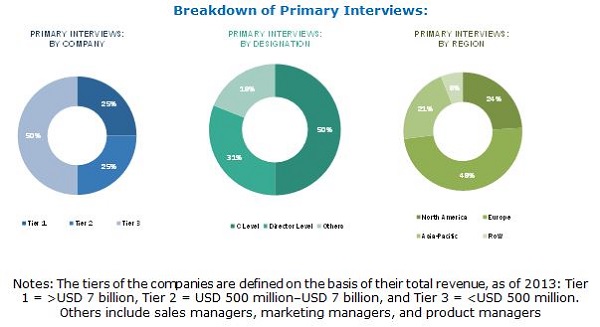 The value chain of ionic liquids ranges from sourcing of precursors (cations and anions) to delivery for end-use applications such as solvents & catalysts, process & operating fluids, plastics, electrochemistry & batteries, and bio-refineries. The ionic liquids industry is dominated by a few established players. Most of the key suppliers market their products mostly through local and regional distribution channels. Production units in North America and Europe supply ionic liquids globally. Various research institutions are focusing on the development of ionic liquids and their commercialization.

Ionic liquids are mostly used for laboratory/research applications, with a few companies commercially using them.

This research report categorizes the global ionic liquids market based on application and region.

On the basis of Application:

The market size of ionic liquids is estimated to reach USD 39.6 Million by 2021, registering a CAGR of 9.2% between 2016 and 2021. The market is driven by rising demand for ionic liquids owing to their unique properties along with development and commercialization of ionic liquid applications. The ionic liquids find potential applications in solvents & catalysts, process & operating fluids, plastics, batteries & electrochemistry, and bio-refineries.

In the solvents & catalysts application segment, ionic liquids are widely used as solvents and solvents & catalysts. The use of these liquids improves productivity and yields of a chemical reaction. The ability of these liquids to act both as solvents and catalysts increases their use in a number of industrial reactions. These liquids have low vapor pressures, volatility, and VOC content. With the restrictions laid on the use of VOCs by REACH and EPA, the replacement of solvents by these liquids is expected to drive the market. North America accounted for the second-largest market share of ionic liquids in 2015. 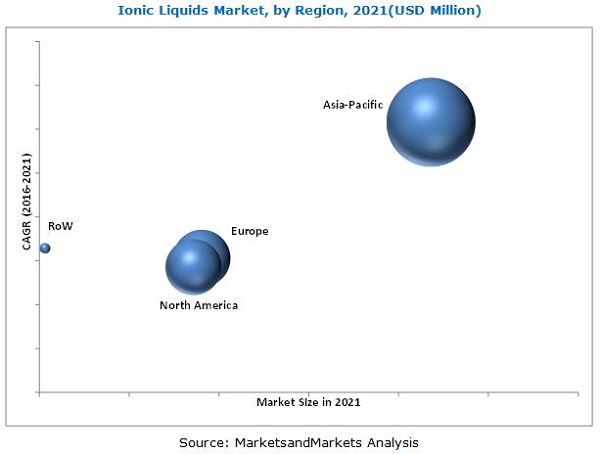 The factor restraining the growth of the ionic liquids market is its price. As these liquids are manufactured in a small scale, once the demand grows owing to commercialization of applications, the prices are expected to decrease making their use in various processes economic and feasible.

BASF is the largest player in the ionic liquids market. The company’s diversification and R&D activities made it the first one to commercially use ionic liquids in its patented technology BASIL (bi-phasic acid scavenging using ionic liquids). The company is constantly developing new ionic liquids for different applications, and it markets its products through Sigma Aldrich.