[179 Pages Report] The global refinery catalysts market size is expected to grow from USD 4.0 billion in 2020 and USD 4.7 billion by 2025, at a CAGR of 2.9% during the forecast period. The growth of this market can be attributed to the rising demand for petroleum derivatives. Also, demand for fuel with a high octane number is also anticipated to drive the growth of the refinery catalysts market. 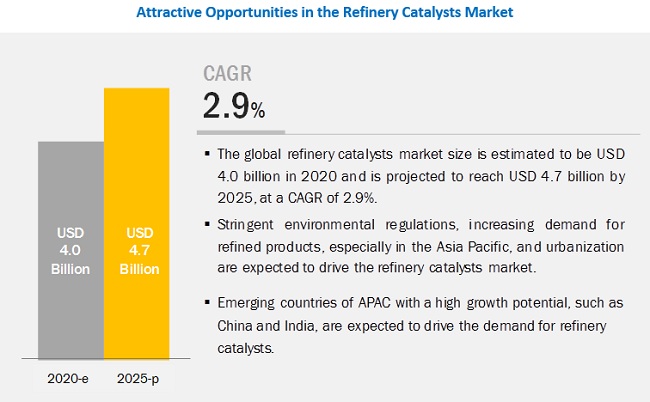 Hydrocracking catalysts to register the fastest growth during the forecast period.

The objective of hydrocracking catalysts is to convert heavy oil feedstock into high quality, lighter fuel products such as naphtha, gasoline, jet fuel or kerosene, and diesel, and hydrowax, which can be used as a petrochemical plant lube basestock or feedstock. Rising demand for petroleum derivatives and stringent regulations focusing on the use of ultra-low sulfur diesel (ULSD) are expected to drive the market for hydrocracking catalysts.

The growing number of Stringent regulations for vehicle emissions across the world is driving the overall refinery catalysts market.

Emissions that are released into the environment from automobiles and industrial processing units have been harming the environment significantly. According to the US Environmental Protection Agency (EPA), a typical vehicle emits about 4.6 metric tons of CO2 per year. The average gasoline vehicle on the road today has a fuel economy of about 22 miles per gallon and drives around 11,500 miles per year. Every gallon of gasoline burned creates about 8.9 kg of CO2. This led to the introduction of new environmental regulations to reduce air pollution by decreasing the sulfur content in gas and ultra-low sulfur content in diesel (ULSD). These regulations have necessitated the process of petroleum treatment, which is dependent on refinery catalysts. 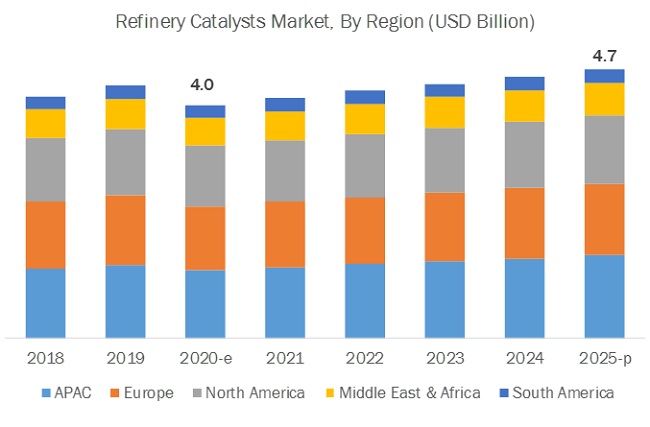 APAC is expected to account for the fastest-growing market during the forecast period.

This research report categorizes the refinery catalysts market based on type, ingredient, and region.

Based on the region

*Only qualitative data will be provided for the sub-segment

*Only qualitative data will be provided for the sub-segment

The study involved four major activities in estimating the current size of the refinery catalysts market. Exhaustive secondary research was done to collect information on the market, the peer market, and the parent market. The next step was to validate these findings, assumptions, and sizing with industry experts across the value chain through primary research. Both top-down and bottom-up approaches were employed to estimate the complete market size. After that, market breakdown and data triangulation were used to estimate the market size of segments and sub-segments.

The refinery catalysts market comprises several stakeholders, such as raw material suppliers, processors, end-product manufacturers, and regulatory organizations in the supply chain. The demand side of this market is included lab technicians, technologists, and sales/purchase managers from the refinery catalysts industry. The supply side is characterized by advancements in technology and diverse application segments. Various primary sources from both the supply and demand sides of the market were interviewed to obtain qualitative and quantitative information.

Following is the breakdown of primary respondents 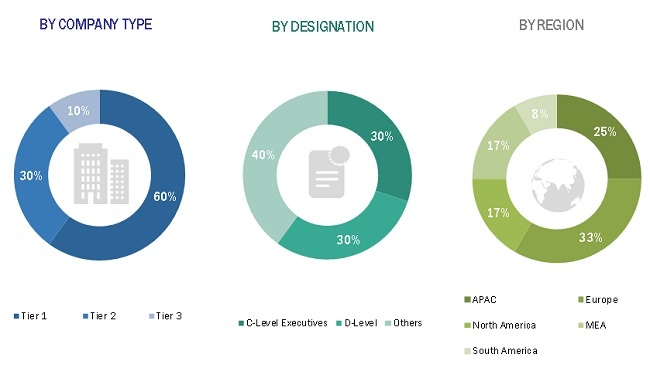 Both the top-down and bottom-up approaches were used to estimate and validate the total size of the refinery catalysts market. These methods were also used extensively to determine the size of various sub-segments in the market. The research methodology used to estimate the market size included the following:

After arriving at the overall market size using the refinery catalysts market size estimation processes as explained above, the market was split into several segments and sub-segments. To complete the overall market engineering process and arrive at the exact statistics of each market segment and subsegment, the data triangulation, and market breakdown procedures were employed, wherever applicable. The data was triangulated by studying various factors and trends from both the demand and supply sides in the various end-use industries sources.

Interested only in Americas cut-off section of the report

Refinery Catalyst Market by Type and other market insights

Interested in market potential of Electric Heaters in refineries, CAGR, and Petrochemical industry

need information to update himself. Do not wish to buy report