Alkyl naphthalene sulfonates are extensively used in the textiles industry for bleaching and dying operations because of their wetting and defoaming properties. Azo dyes that constitute a major part of commercial dyes are used extensively in the textiles industry. These dyes use alkyl naphthalene sulfonates as a precursor. They are used for a variety of fabrics and offer a wide range of colors. Some of the other derivatives of naphthalene such as naphthylamines and sulfuric acid salts are also useful as intermediates in dye production.

Superplasticizers are one of the important construction chemicals used as concrete admixtures in ready-mix concrete, precast concrete, high-performance concrete, and shotcrete. Sulfonated naphthalene formaldehyde (SNF) is a high concentrate naphthalene-based superplasticizer extensively used in concrete admixtures to improve the workability, strength, and durability of the hardened concrete. It improves the water-to-cement ratio in concrete and increases its density. SNF is a high range water reducer made of naphthalene, sulfonic acid, formalin, and alkali through sulfuration, hydrolyzation, condensation, and neutralization reaction. It has good slump retention characteristics, enabling its use in ready-mixed concrete where long hauls occur. Thus, it meets all the requirements of chemical admixture specifications for concrete. It can be used in powder or liquid form depending on the type of application. Its application areas include ready-mix concrete, pre-cast and pre-stressed concrete, and congested reinforcement areas. It is also used in reducing water content, for improving impermeability and durability, in marine concrete, gunite concrete, architectural concrete, and in pumpable concrete. The cost of SNF is low in comparison to rest of the superplasticizers such as lignosulphonates, sulfonated melamine formaldehyde (SMF), and polycarboxylic ether (PCE), making it the most abundantly used superplasticizer worldwide. Thus, increasing consumption of naphthalene derivatives in the construction industry plays a significant role in driving the naphthalene derivatives market.

The diffusion of Naphthalene and its derivatives into the air through moth repellent, cigarette smoke, burning of wood, and accidental spills can cause environmental risks. Naphthalene and its derivatives easily pass through soil particles into water. They can also evaporate easily into the air owing to their volatility. Naphthalene is easily converted into 1 naphthol or 2-naphthol in the presence of moisture and sunlight, which can increase the level of toxicity in the air causing many health hazards.

Acute exposure of human beings to naphthalene by inhalation, ingestion, and dermal contact can cause hemolytic anemia and liver and neurological damages. Chronic exposure of human beings and rodents to naphthalene can cause cataracts and damage to the retina. Exposure to naphthalene can also cause anemia in a pregnant woman, which may also be transferred to the unborn child. Naphthalene can also move from mother’s blood to the baby’s blood through breastfeeding. Apart from these, naphthalene and its derivatives can cause reproductive damages in certain animals and are reported to be carcinogenic. Vapors of naphthalene and coal tar can develop laryngeal carcinomas or neoplasms of the pylorus and cecum. Therefore, the International Agency for Research on Cancer (IARC) has concluded that naphthalene is possibly carcinogenic to humans and under the EPA 1986 cancer guidelines, naphthalene was assigned to Group C - possible human carcinogen.

The objectives of the study are:

Note: Core competencies* of the companies are determined in terms of their key developments and key strategies adopted by them to sustain their position in the market.

Different secondary sources, such as company websites, encyclopedia, directories, and databases such as Hoovers, Bloomberg, Businessweek, Factiva, and OneSource have been used to identify and collect information useful for this extensive, commercial study of the global naphthalene derivatives market. Primary sources, including experts from related industries, have been interviewed to verify and collect critical information and assess prospects of the market. The top-down approach has been implemented to validate the market size in terms of value. With data triangulation procedures and validation of data through primaries, the exact values of the overall parent market size and individual market sizes have been determined and confirmed in this study. 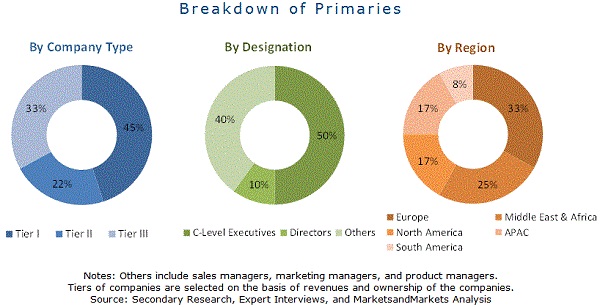 The naphthalene derivatives market has a diversified and established ecosystem of upstream players, such as raw material suppliers, and downstream stakeholders, such as manufacturers, vendors, end users, and government organizations.

This study answers several questions for stakeholders, primarily, which market segments they should focus upon during the next two to five years to prioritize their efforts and investments. These stakeholders include naphthalene derivatives manufacturers such as Koppers (US), BASF (Germany), Rütgers (Belgium), Evonik (Germany), Cromogenia Units (Spain), King Industries, Inc. (US), Carbon Tech Group (Iran), JFE Chemical Corporation (Japan), Clariant (Switzerland), and Huntsman Corporation (US).

“This study answers several questions for stakeholders, primarily, which market segments they need to focus on during the next two to five years to prioritize their efforts and investments.”

This research report categorizes the global naphthalene derivatives market based on form, derivative, end-use industry, and region, and forecasts revenue growth and provides an analysis of trends in each of the submarkets.

Each form is further described in detail in the report with value and volume forecasts until 2022.

Each derivative is further described in detail in the report with value and volume forecasts until 2022.

Based on End-use Industry:

Each end-use industry segment is further described in detail in the report, with value forecasts until 2022.

The global naphthalene derivatives market is estimated at USD 1.53 Billion in 2017 and is projected to reach USD 1.85 Billion by 2022, at a CAGR of 3.8% between 2017 and 2022. The market is witnessing growth due to the growing demand from the textile industry especially in emerging countries of APAC and increasing consumption of construction chemicals such as naphthalene-based superplasticizers in developing countries.

Based on derivative, Sulfonated Naphthalene Formaldehyde (SNF) was the largest segment of the global naphthalene derivatives market, in 2016. The large market size of SNF segment is due to its use as a superplasticizer in concrete admixtures in the construction sector. SNF are cost-effective in comparison to other superplasticizers such as sulfonated melamine formaldehyde condensates and modified lignosulfonates and give high strength and durability to concrete. 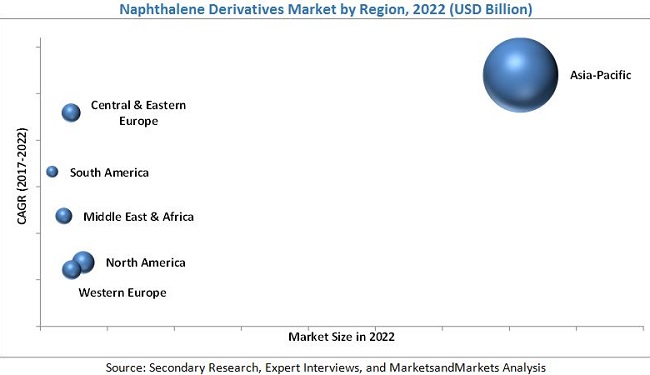 Koppers (US), BASF (Germany), Rütgers (Belgium), Evonik (Germany), and Cromogenia Units (Spain) lead the global naphthalene derivatives market. These players are gaining a strong foothold in the market through their strategies of agreement & joint ventures to regenerate the trailing growth.