The pick to light market was valued at USD 304.1 Million in 2016 and is expected to reach USD 538.2 Million by 2023, at a CAGR of 8.84% between 2017 and 2023. The base year considered for the study is 2016, and the forecast period is between 2017 and 2023. The objective of the report is to provide a detailed analysis of the market based on method, power source, operation, industry, and region. The report provides detailed information regarding the major factors influencing the growth of the pick to light market. The report also gives a detailed overview of the value chain in the ecosystem of pick to light and analyzes the market trends based on the competitive leadership analysis.

The research methodology used to estimate and forecast the pick to light market begins with capturing data pertaining to the revenue of companies through secondary sources such as the International Warehouse Logistics Association (IWLA), Warehousing Education and Research Council (WERC), Material Handling Industry (MHI), and the newsletters of leading players. The vendor offerings are also taken into consideration to determine the market segmentation. The bottom-up procedure has been employed to arrive at the overall size of the global market from the revenues of key players. After arriving at the overall market size, the total market has been split into several segments and subsegments, which have been verified through primary research by conducting extensive interviews with key experts such as CEOs, VPs, directors, and executives. The market breakdown and data triangulation procedures have been employed to complete the overall market engineering process and arrive at the exact statistics for all the segments and subsegments. The breakdown of the profiles of primaries is depicted in the below figure: 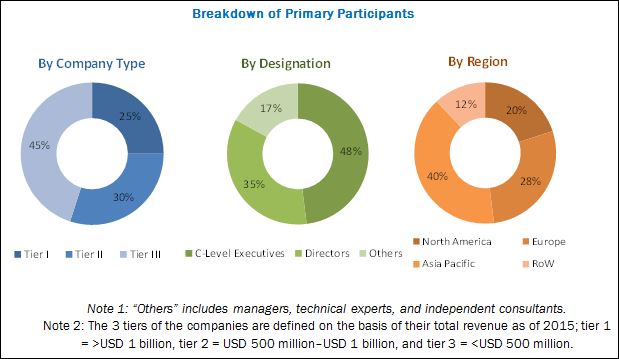 The pick to light value chain comprises the following phases: product concept; manufacturing and assembly; distribution; end user; and post-sale services. Product concept is the initial phase of pick to light value chain. In this phase, companies focus on requirements gathering to define the process. AIOI-Systems (Japan), Banner Engineering (US), Panasonic (Japan), Omron (Japan), and Sick AG (Germany) are some of the hardware manufacturers. These companies provide pick to light sensors and modules. Pick to light solutions can operate as stand-alone products; they can also be integrated with warehouse management software (WMS).

Target Audience for the Report:

This study answers several questions for the stakeholders, primarily which market segments to focus on in the next 2–5 years for prioritizing efforts and investments.

This report categorizes the global pick to light market on the basis of method, power source, operation, industry, and geography.

Pick to Light Market, by Operation

Pick to Light Market, by Method

Pick to Light Market, by Industry

Pick to Light Market, by Region

The pick to light market is expected to grow from USD 323.7 Million in 2017 to USD 538.2 Million by 2023, at a CAGR of 8.84% between 2017 and 2023. The growth of this market is propelled by the emergence of advanced automated warehouses, growth of the e-commerce industry, and globalization of supply chain network. Moreover, pick to light offers error-free and better productivity operations and enhanced labor utilization. The retail and e-commerce industry is expected to capture the largest share of the market owing to the requirement of fast and efficient distribution of goods in this industry. Moreover, growing online shopping trend increases the use of pick to light systems in its warehouses for fast and accurate delivery of goods. Increasing competition among e-commerce companies has pushed them to offer same-day delivery and products at high discounts. Pick to light systems, along with other distribution center technologies, help expedite the order fulfillment process.

The global pick to light market is dominated by the manual picking method owing to its adoption for various applications in several industries, such as assembly and manufacturing; retail and e-commerce; and pharma and cosmetics. The manual method is cost-effective; thus, it has short payback period. Manual systems are simple to implement and operate. Moreover, their operating cost is also low compared with their sensor-based counterparts. Murata Machinery (Japan), SSI Schaefer (Germany), Dematic (US), Honeywell Intelligrated (US), KNAPP (Austria), AIOI-System (Japan), Turck (Germany), and Lightning Pick Technologies (US) offer manual pick to light systems.

Pick to light systems support picking and sorting operations from shelves to other locations. Light-directed picking and putting provide better productivity and error-free operations, resulting in enhanced productivity. Picking operations are widely used for order fulfillment process in e-commerce, and pharma and cosmetics industries. They are most suitable for piece picking and broken case picking of items. However, the use of pick to light for putting operation is expected to gain traction in the coming years.

Europe is an early adopter of pick to light systems and a mature market for pick to light. Europe held the largest market share in 2016, and it is expected to sustain its position in the coming years. The region has numerous manufacturing and warehousing facilities of various industries, such as automotive, aerospace & defense, machinery, and electrical and electronics. Need for highly customized automated warehousing facilities and the industrialization of countries in Eastern Europe drive the market in the European region. Fast-growing e-commerce industry, booming manufacturing sector, and increasing emphasis on domestic production by emerging economies such as China and India are the key factors for the significant growth of the pick to light market in APAC. 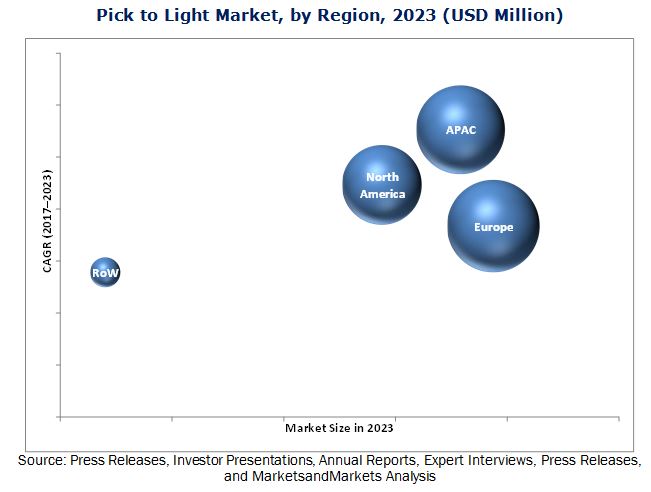 One of the key restraining factors for the pick to light market is the requirement of considerable upfront investment for installation and financial strength for maintenance. Also, pick to light systems are unsuitable for heavy products and large picking areas.

Key market players such as Murata Machinery (Japan), SSI Schafer (Germany), Dematic (US), Honeywell Intelligrated (US), Swisslog (Switzerland), and Lightning Pick Technologies (US) are focusing on strategies such as product launches, contracts, agreements, acquisitions, and collaborations to enhance their product offerings and expand their businesses.

Growth opportunities and latent adjacency in Pick to Light Market