According to MarketsandMarkets, the global Plant-based food market is estimated to be valued at USD 9.4 billion in 2022. It is projected to reach USD 16.3 billion by 2027, with a CAGR of 11.7%, in terms of value between 2022 and 2027. Plant-based food includes finished products consisting of ingredients derived from plants, that include vegetables, fruits, whole grains, nuts, seeds, and legumes. 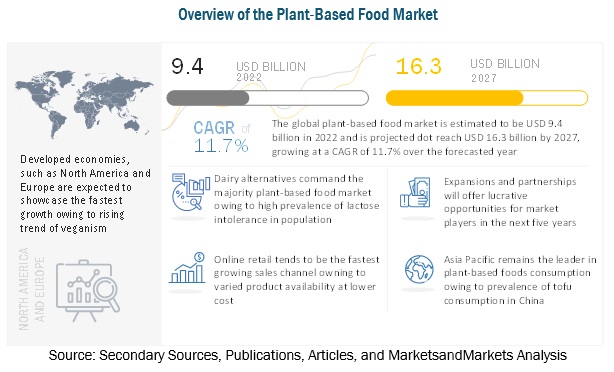 Drivers:  Investments by food industry pioneers drive the innovation in market, and hence its growth

There are multiple drivers for the plant-based foods market. Some of them include food industry pioneers delving into the segment with new product launches and rising awareness in general about the health and environmental benefits of plant-based foods over animal-based ones.

Plant-based food market is restrained by its higher prices when compared to animal-based products. High prices of the products are owing to premiums in place for various labels, such as ‘vegan’ and ‘organic’. Further, the market also does not have the benefit of economies of scale, which the animal-based food market has, thereby inflating plant-based products prices. High product prices also owe themselves to low maturity of the market and the constant efforts on supply chain and product innovation going on.

Consumers are increasingly demanding healthier alternatives to animal-based products, such as milk and red meat. Further, blending proteins from different plant-based sources also helps meet the demand for a diverse source of ingredients, which is explored by manufacturers.

Challenges: Texture and mouthfeel of plant-based foods need to be at par with animal-based ones

Plant-based foods’ adoption is hindered by its texture and flavour, which consumers want to match to that of animal-based foods. However, brands such as Beyond Meat and Impossible Foods have been challenging such perceptions and beliefs by launching products which try to mimic and hence give the mouthfeel of animal-based products.

Withing meat alternatives, plant-based hot dogs, sausages and patties are expected to record the fastest CAGR over the forecasted period. This is owing to the trending popularity and prolific new product launches of plant-based sausages, along with their increasing availability as a vegan option in restaurants.

By channel, food retailing through modern channels such as supermarkets and e-commerce are expected to shine over the forecasted period.

Sales of plant-based meat alternatives is expected to be the highest in modern grocery retailers, such as supermarkets and hypermarkets. This is owing to strategies, such as prominently visible shelf space, and lucrative discounts along with bundling products to reduce unit price. However, e-commerce is expected to grow the fastest over the forecasted period owing to its wide variety of product assortments along with low prices.

Developed economies, such as the North American and European markets is expected to showcase the fastest growth over the forecasted period. This is supplemented by rising number of vegan restaurants owing to increased health consciousness amongst consumers. This is further owing to rising awareness regarding the potential negative aspects of animal-based proteins, such as those on the environment.

Key players in this market include Beyond Meat Inc. (US), Impossible Foods Inc. (US), Atlantic Natural Foods LLC (US), Garden Protein International LLC (Canada), Kellogg's Company (US), among others.

Note: Currently, list of only 9 companies have been provided. However, this section covers 12-15 key company profiles which include business overview, recent financials, product offerings, key strategies, and swot analysis. recent financials can be provided-based on data/information availability in public domain. The list of companies mentioned above can be altered depending upon client’s interest

14 APPENDIX
Note: The TOC prepared above is tentative and may subject to change, based on the research progress