[130 Pages Report] The PU sole (footwear polyurethane) market size is estimated at USD 4.2 billion in 2019 and projected to reach USD 5.9 billion by 2024, at a CAGR of 7.6%. Polyurethane is used in footwear to provide the perfect combination of ergonomics, microclimate, and comfort. The superior properties of polyurethane as shoe sole material, growth in footwear sales, and increasing production in the growing economies are expected to drive the PU sole (footwear polyurethane) market. 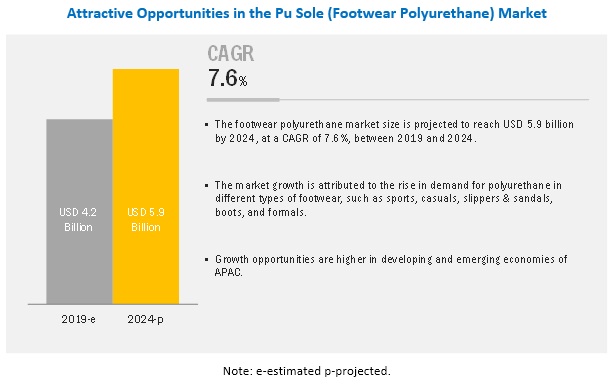 Casuals to be the fastest-growing segment of PU sole (footwear polyurethane) market between 2019 and 2024.

On the basis of application, the casuals segment is projected to register the highest CAGR during the forecast period. Casual footwear is defined as footwear that is worn on a daily basis for comfort and fashion. Such footwear also offers a wide range of performance for outdoor activities. Loafers, sneakers, and flat soles are a few types of casual footwear available commercially. The material selection for the soles is a key factor as the soles play a major role in providing comfort to users. The use of polyurethane in soles offers greater flexibility, durability, and comfort, which is driving the demand in this segment.

On the basis of raw material, the methylene diphenyl diisocyanate (MDI) segment is projected to register the highest CAGR during the forecast period. 4,4’-MDI isomer is used in shoe sole formulation. In order to make polyurethane soles for footwear, MDI is reacted with polyols in the presence of other additives. MDI-based polyurethanes have applications in compact outsoles and unit soles. They also provide a higher degree of stiffness and resilience. These properties are expected to drive the MDI-based PU sole (footwear polyurethane) market. 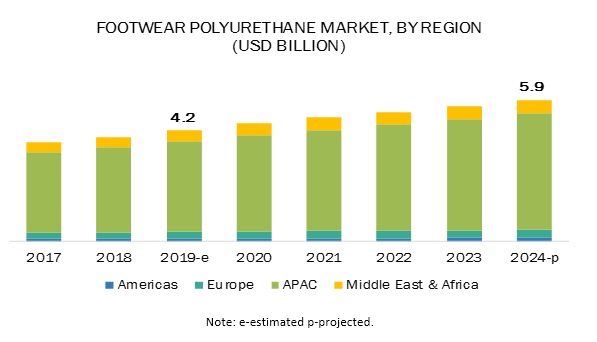 This research report categorizes the global PU sole (footwear polyurethane) market on the basis of application, raw material, and region.

On the basis of raw material:

The market is further analyzed for the key countries in each of these regions.

What are the types of footwear that uses polyurethane (PU) sole?

There are generally five categories of footwear that uses PU sole namely sports, casuals, boots, slippers & sandals and formals. Polyurethane is used in outsole, midsole and insoles of footwear depending upon the applications.

What are the factors driving the growth of PU sole?

With the growing number of footwear production and sales coupled with the use of polyurethane as a shoe material due to its properties such as comfort, durability, good fit, and affordability is driving the growth of PU sole in the market.

What are the challenges faced by the market players?

Major challenges in the market are the volatility in the crude oil prices as it is used for the production of raw materials for PU, andthe other is the difficulty in the processing of thermoplastic polyurethane faced by the manufacturers.

Who are the major players in the PU sole market?

The study involves four major activities in estimating the current market size of footwear polyurethane. Exhaustive secondary research was done to collect information related to the PU sole (footwear polyurethane) market. The next step was to validate these findings, assumptions, and sizing with industry experts across the value chain through primary research. Both top-down and bottom-up approaches were employed to estimate the overall market size. After that, market breakdown and data triangulation were used to estimate the market size of segments and subsegments.

The PU sole (footwear polyurethane) market comprises several stakeholders, such as raw material suppliers, technology developers, derivative manufacturers, and regulatory organizations in the supply chain. The development of application usage characterizes the demand side of this market. The supply side is characterized by advancements in technology and diverse application segments. Various primary sources from both the supply and demand sides of the market were interviewed to obtain qualitative and quantitative information. 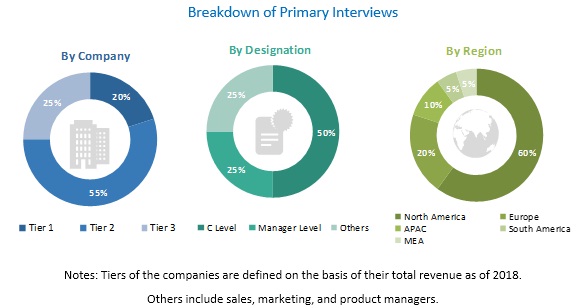 After arriving at the overall market size from the process explained above, the total market was split into several segments and subsegments. The data triangulation and market breakdown procedures were employed, wherever applicable. In order to complete the overall market estimation process and arrive at the exact statistics for all segments and subsegments, the data was triangulated by studying various factors and trends from the demand and supply sides. Along with this, the market was validated using both the top-down and bottom-up approaches.

With the given market data, MarketsandMarkets offers customizations according to the specific needs of the companies. The following customization options are available for the report: