[200 Pages Report] The release coating market is estimated to be USD 157 million in 2020 and is projected to reach USD 225 million by 2025, at a CAGR of 7.5% between 2020 to 2025. The rising awareness of health, increase consumer spending, growth of e-commerce, and increase of women workforce and the key factors driving sectors such as packaging, hygiene, consumer products, cosmetics, households, retails, and pharmaceuticals. 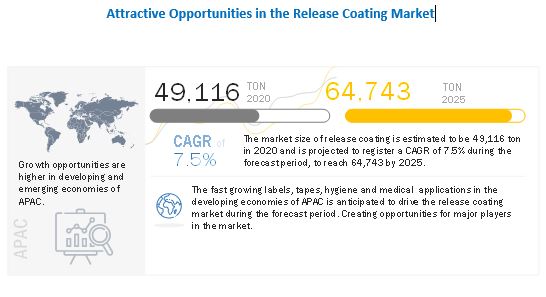 The impact of COVID-19 has been severe, with the release coating market estimated to decline by 15.4% in 2020 in terms of value. All the end-user applications in the release coating market except for hygiene and medical is estimated to register negative growth due to factors such as lockdown, supply chain disruption, and decline in consumer spending affecting end-use industries such as packaging, electrical & electronics, logistics, hygiene & personal care, consumer goods, and retail. The panic buying of hygiene products during the start of the CVID-19 pandemic and the increased demand for medical attention pertaining to the COVID-19 pandemic is expected to keep the growth of hygiene and medical application positive.

Hygiene application is the fastest growing in the release coating market

Increasing penetration of hygiene products such as baby diapers, sanitary napkins, and adult incontinence products in the developing countries and increased consumption of premium hygiene products in the developed countries is expected to drive the global release coating market during the forecast period. The growing awareness, increasing consumer spending, and growth of e-commerce are the factors that are driving the hygiene application in the release coating market.

Better healthcare facilities are leading toward an increase in life expectancy. More than 75% of costs in healthcare facilities is from people suffering from chronic diseases, which in turn helps the growth of the medical device and equipment market. Various medical applications benefit from release coating, ranging from analytical and surgical instruments to sterilization equipment and packaging of pharmaceutical products. The release coating is particularly useful with implantable instruments such as orthopedic and respiratory devices due to their low friction qualities and ease of insertion. In the future, the growing demand for medical devices and equipment, and tools will drive the release coating market as the demand for healthcare facilities rise.

The aging population worldwide is driving the use of disposable medical devices and transdermal patches for therapeutics and pharmaceuticals. The rise in per-capita income in developing countries increases the expenditure on healthcare facilities. As the income level increases, people tend to choose better healthcare facilities. The growth in the medical industry will lead to the growth of the release coating market

Restraints: Differences in release control may result in failure of the release coating

Control release polymers (CRPs) are widely used in release coating for the tapes and label industries to increase the release force needed to remove a label or transfer the adhesive from a release liner during delamination. These tight-release liners are used with removable labels where premature delamination is a concern and with transfer adhesives where there must be a release differential between the two liners of the laminate construction. Tight release control depends upon various factors such as adhesive formulations, adhesive thickness, laminate storage conditions, liner handling, and incomplete cure. Any of these factors could contribute to a significant difference in release control. In the absence of suitable release control as per different substrates, release coating could become soft and break easily, thus affecting the very purpose of non-sticking. However, many big manufacturers are coming up with advanced technologies that can help in delivering good controlled release across a wider range of substrates while supporting increasing line speeds and volumes, maintaining superior quality, and thus reducing systems costs.

Among different materials, silicones are preferred as they can be applied and cured into a PDMS network on various backing substrates, thereby limiting migration problems. They also offer substantially lower release forces than other materials.

The silicone polymer may be selected on the basis of specific release capabilities and other desired properties depending upon the end applications. The preferred silicone polymers are the PDMS polymers, although the organomodified polymers may be used. Coatings made from PDMS offer excellent anchorage to many different substrates and are compatible with a wide variety of adhesives. Furthermore, PDMS based release coating can be cured quickly, and they are easy to adjust. It enhances the processing, release performance, and cost-effectiveness of the substrate on which coating is applied.

Challenges: The development of cost-effective products under stringent environmental regulations is a challenge

Increasingly stringent environmental regulations governing the use of release coating have compelled manufacturers to develop products with low VOCs, high solid content, and less harmful biocides. REACH, Green Seal, SED, and BPD are stringent environmental regulations to cut down the usage of VOCs and HAPs. This has resulted in technical difficulties in the use of solvent-borne coatings. These regulations also make the industries shift to eco-friendly coatings. However, the challenge exists in the development of new products that conform to these strict regulations and also make it efficient for the industries economically.

APAC estimated to be the fastest-growing market for release coating

Asia-Pacific is estimated to be the fastest-growing market for release coating. This high growth is associated with the increasing penetration of hygiene products in the APAC countries. China is projected to be the largest market for release coating in APAC, followed by Japan. India, South Korea, Indonesia, Taiwan, and Malaysia are other major countries contributing to the growth of the release coating market in the region. The growing pharmaceutical, retail, consumer goods, cosmetics, and household segments in the region drive the packaging industry, and with it, the label application grows, which holds the largest share in the APAC release coating market.

The semiconductor industry in the region is anticipated to pick growth with the increasing adoption of disruptive technologies such as Artificial Intelligence (AI) and 5G during the forecast period. This growth drives the demands of tapes application in the release coating market. Countries such as Taiwan, China, Japan, and South Korea are the front runners in this upcoming development.

The packaging industry in developing economies such as India, Indonesia, Malaysia, and other South East Asian countries is expected to grow in double digits during the forecast period. The fast-growing packaging industry drives the label application of the release coating market in the region, with the application holding a major share in the market. 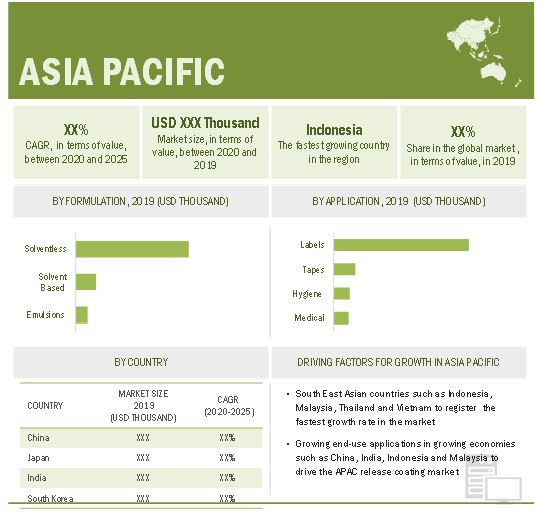 Scope of the report

This research report categorizes the release coating market on the basis of material, formulation, release liner, application, and region.

On the basis of material

On the basis of formulation

On the basis of release liner

On the basis of application

On the basis of region

The market has been further analyzed for the key countries in each of these regions.

What are the major drivers influencing the growth of the release coating market?

The major drivers influencing the growth of release coating are the growing population, increasing per capita income, and the growing e-commerce.

How is the release coating market segmented in terms of material?

The release coating market into silicone and non-silicone in terms of material.

How is the release coating segmented in terms of formulation?

The release coating is segmented into solvent based, solventless, and emulsions.

What are the major applications for release coating?

The major applications of release coating are labels, tapes, hygiene, industrial, medical, food bakery, and others.

What are the biggest restraints for release coating?

What are the new opportunities in the release coating market?

Who are the major manufacturers of release coating?

How is the application aligned in the release coating market?

The study involved four major activities for estimating the current size of the global release coating market. Exhaustive secondary research was carried out to collect information on the market, the peer product market, and the parent product group market. The next step was to validate these findings, assumptions, and sizes with the industry experts across the value chain of release coating through primary research. Both the top-down and bottom-up approaches were employed to estimate the overall size of the release coating market. After that, market breakdown and data triangulation procedures were used to determine the size of different segments and sub-segments of the market.

The release coating market comprises several stakeholders such as raw material suppliers, technology developers, release coating companies, and regulatory organizations in the supply chain. The demand side of this market is characterized by the development of the label and tapes applications. The supply side is characterized by advancements in technology and diverse application industries. Various primary sources from both the supply and demand sides of the market were interviewed to obtain qualitative and quantitative information.
Following is the breakdown of primary respondents

The overall market size has been used in the top-down approach to estimate the sizes of other individual markets mentioned in the segmentation through percentage splits derived using secondary and primary sources.

For calculating each type of specific market segment, the size of the most appropriate immediate parent market has been considered for implementing the top-down approach. The bottom-up approach has also been implemented for data extracted from secondary research to validate the market sizes, in terms of value and volume, obtained for each segment.
The exact values of the overall parent and individual markets have been determined and confirmed through the data triangulation procedure and validation of data through primary interviews. The data triangulation procedure implemented for this study is explained in the next section.

After arriving at the total market size through the estimation process explained above, the overall market was split into several segments and sub-segments. The data triangulation and market breakdown procedures were employed, wherever applicable, to complete the overall market size estimation process and arrive at the exact statistics for all segments and sub-segments. The data was triangulated by studying various factors and trends from both the demand and supply sides. In addition, the market size was validated by using both the top-down and bottom-up approaches. Then, it was verified through primary interviews. Hence, for every data segment, there are three sources-top-down approach, bottom-up approach, and expert interviews. The data were assumed to be correct when the values arrived at from the three sources matched.

Along with the given market data, MarketsandMarkets offers customizations as per the specific needs of the companies. The following customization options are available for the report: