Government is increasing spending capacity over public spaces and facilities, as a crime prevention measure. It will surge the demand for cameras. Increasing number of security breaches is also driving the Government for investment in video surveillance system. Recently, Guangdong Province, China Govt. has installed 1.1 million cameras and is expected to install 2 million more by 2015. 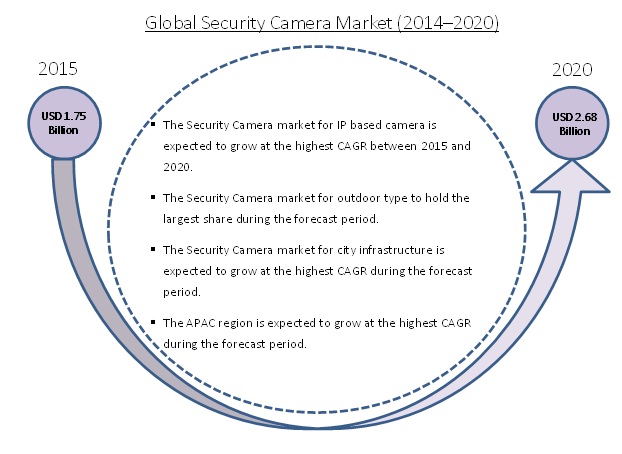 The research methodology used to estimate and forecast the security camera market begins with obtaining data through secondary research from secondary sources such as encyclopedia, directories, and databases such as OneSource and Factiva, and white papers of leading players in the security cameras market. The bottom-up procedure has been employed to arrive at the overall size of the security camera market from the revenues of key players. After arriving at the overall market size, the total market has been split into several segments and subsegments, which have been verified through primary research by conducting extensive interviews with officials such as CEOs, VPs, directors, and executives. The market breakdown and data triangulation procedures have been employed to complete the overall security cameras market engineering process and arrive at the exact statistics for all segments and subsegments. The breakdown of the profiles of primaries has been depicted in the following figure. 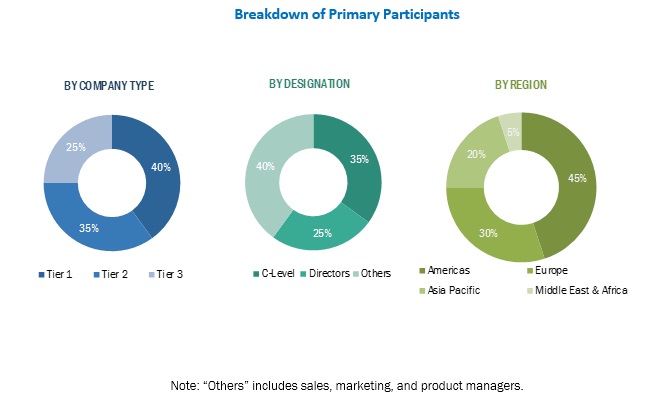 This study answers several questions for stakeholders, primarily regarding the market segments to focus on in the next 2–5 years for prioritizing efforts and investments.

The security cameras market is expected to reach USD 2.68 billion by 2020 from USD 1.75 billion in 2015, at a CAGR of 8.8% from 2015 to 2020. Developing countries are main attraction for the security market, increased government spending on security systems, reduction in ASP for IP based cameras and acceptance of IR illumination for better vision in major consumer applications,

especially in retail sector are few of the factors driving the growth of security cameras market. Investment in infrastructure projects in private and public sector leads to increasing need of surveillance system in the APAc as well as MENA region. For instance, L&T Company had received a contract for the installation of 6,000 CCTV cameras in 2016 in Greater Mumbai, India.

In this report, the security cameras market has been segmented based on system, application, feature, camera resolution, type, and geography. The outdoor camera is expected to grow at the highest CAGR during forecast period. Due to availability of advanced technology at low cost and entry of many manufacturers, the bargaining power of customers has increased. This has increased the market of outdoor network surveillance cameras around the world in the coming years. 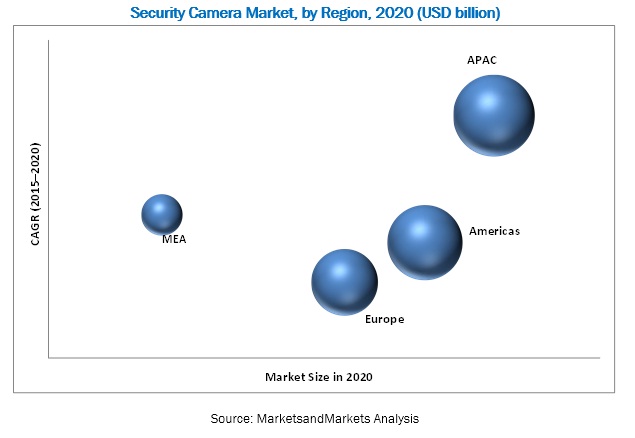 By region, the security cameras market has been segmented into North America, Europe, APAC, and RoW. APAC is expected to account for the largest size of the overall security camera market during the forecast period. Asia Pacific is the largest manufacturer and consumer of surveillance cameras with IR illuminators. The competitive market in the region is the main reason for lower ASP of the products. The lower price product with high technologies like HD videos and PTZ features has created the trend of installing the video surveillance cameras in domestic applications.

The surveillance camera with IR illuminator market for City infrastructure has the highest market share for the application of the products. Due to increasing installation of camera for surveillance of highways, railways, airways, public stadium, parks, energy supply infrastructure is expected to increase the market of security camera in the coming years.

The Players in retail sector like Walmart stores, Tesco, Metro Group, Kroger, Schwarz Group and Safeway are expanding their business across world. The increasing investment has supplemented the installation of surveillance camera for security and safety of the shops and products.

Critical questions that the report answers: