[124 Pages Report] The SUV & sub-compact SUVs market in terms of production, is projected to reach 30.2 million units by 2020, growing at a CAGR of 5.36%. The SUV & sub-compact SUV market has witnessed considerable growth in countries such as the U.S., China, India, and Mexico, owing to the low cost, compact size, stylistic design, and better maneuverability among others.

(SUV) is a vehicle which is capable of driving on on-road as well as off-road terrains as it is usually equipped with a four-wheel or all-wheel drive (AWD) and is built on a light truck chassis. The SUV is expected to have a passenger carrying space and are known for their high ground clearance, high center of gravity, high H point, with boxy body.

Increase in Socio economic conditions to boost the SUV’s market

The economic conditions in the U.S. have improved over the past five years. The country’s consumer confidence and aggregate consumption demand are on the rise. This can be attributed to the decreasing unemployment rate and increasing level of wages. The U.S. economy grew by 2.4% in 2014%—the highest since the 2008 financial crisis. This is driving the automotive market in the North American region. Similarly, the Indian economy is picking up, and is propelling the growth of the automotive industry in Asia-Oceania. China is currently going through economic adjustments. However, industry experts predict that the Chinese economy will stabilize in the long run and project steady growth figures for its automotive industry. As per the data of China Association of Automobile Manufacturers, automotive sales are increasing. Sales of SUVs, MPVs and cars increased by 9.6% in January 2016 from January 2015. This highlights that irrespective of slowing global demand growth, China’s domestic demand for vehicles is strong. The growth of the SUV segment is also influenced by falling oil prices, especially in the U.S., and cheaper credit. The segment is set to witness substantial growth in India. 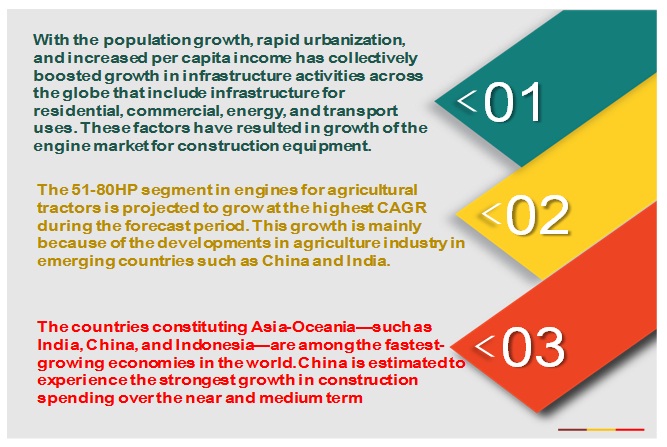 During this research study, major players operating in the SUVs market in various regions have been identified, and their offerings, regional presence, and distribution channels have been analyzed through in-depth discussions. Top-down and bottom-up approaches have been used to determine the overall market size. Sizes of the other individual markets have been estimated using the percentage splits obtained through secondary sources such as Hoovers, Bloomberg BusinessWeek, and Factiva, along with primary respondents. The entire procedure includes the study of the annual and financial reports of the top market players and extensive interviews with industry experts such as CEOs, VPs, directors, and marketing executives for key insights (both qualitative and quantitative) pertaining to the market. The figure below shows the breakdown of the primaries on the basis of the company type, designation, and region considered during the research study. 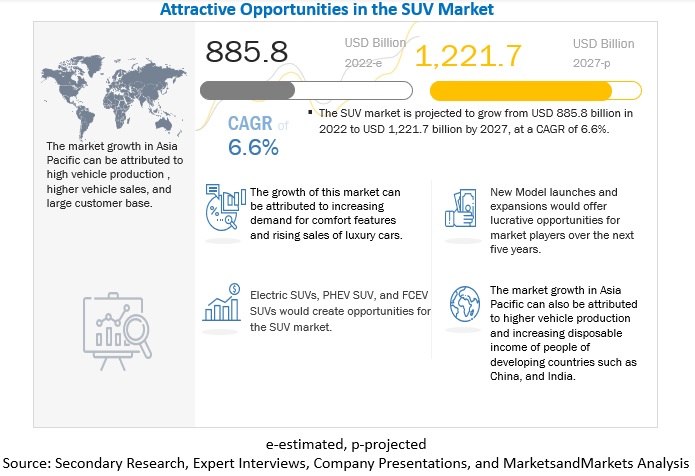 With the given market data, MarketsandMarkets can provide market data for the below categories:

The SUV & sub-compact SUVs market in terms of production, is projected to reach 30.2 million units by 2020, growing at a CAGR of 5.36%. The SUV & sub-compact SUV market has witnessed considerable growth in countries such as the U.S., China, India, and Mexico, owing to the low cost, compact size, stylistic design, and better maneuverability among others.

The growth of sub-compact SUVs market is mainly owing to the mixture of advantages that this segment offers. For instance, features such as a small engine and hence, better fuel efficiency as passenger cars, compact body (as compared to SUVs) and excise duty rebate for this vehicle segment in a majority of the countries. In India, the sub-4-meter vehicles attract 8% excise duty as compared to 27% for vehicles that are over 4 meters in length. The sub-compact SUV segment also resembles the SUV segment in terms of unibody construction, high ground clearance, high H-point among others. The Nissan Juke and Mini Countryman are key examples of unibody construction

Asia-Oceania is projected to grow at the highest CAGR during the forecast period, as a result of availability of economical domestic resources, strong state support, and emerging economies in the region which are expected to boost market growth especially in countries such as China and India. Several OEMs are investing in the region, prompted by factors such as the expanding middle class and the young demographic. SUVs & sub-compact SUVs production is expected to grow in countries such as China and India, owing to availability of cost-effective labor and favorable government policies. For instance, the Government of India has allowed 100% foreign direct investment (FDI) with no minimum investment criteria for the automotive sector. The region houses OEMs such as Toyota (Japan), Hyundai Motor Company (South Korea), and Honda Motor Company (Japan). Additionally, certain countries in Asia-Oceania, such as South Korea and Japan, have strong technological capabilities. 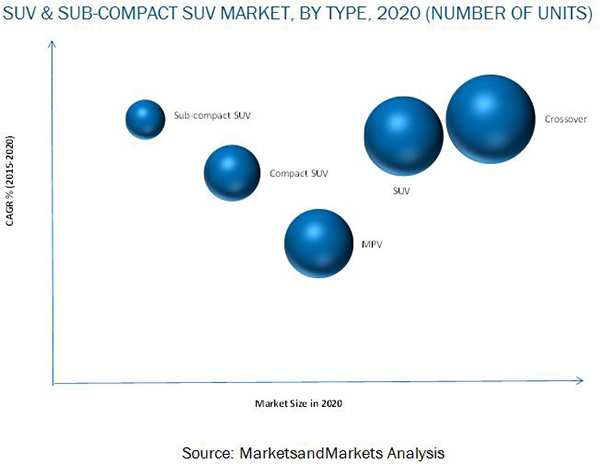 MUVs and Sub-compact to drive the overall market

Market for MUV segment is projected to grow at highest CAGR in terms of production compared to other segments during the forecast period. Strong demand from markets such as India and Japan has prompted automakers to expand MPV production. The market for crossovers is estimated to grow fastest in terms of sale compared to other segments during the forecast period. Consumers are inclined towards crossovers due to the benefits they offer over full-size SUV. For instance, variety of factors, including low cost, higher seating arrangement, and easy maneuverability due to its modified structure for urban areas.

Sub-compact SUV is a smaller (compact) version of SUV with length under 4,200 mm and based on supermini (European B segment) platform.  Sub-compact SUVs are usually installed with four-wheel or all-wheel drive (AWD) systems.

This segment provides stylistic design and SUV-based features. The manufacturers are also motivated to create new innovative aerodynamic designs on the mono-body framework crossovers provide. The philosophy is to provide a more stable, easily maneuverable, and compact, non-box shaped heavy vehicle segment that can be not only optimally utilized for urban transport, but also has off-road capabilities. Sub-compact SUV segment consequently has a huge market potential due to their varied features and relatively low prices. The growing inclination towards this segment for the last decade can be attributed to the unique combination of SUV features available in a compact aircraft-like shape. It is noticed that the demand for sub-compact SUV has kept aggregate automobile sales level high. Millennials are generally the primary target market, as they tend to be the major customers of sub-compact SUVs. Young buyers are leasing this vehicle segment at a higher rate than others. The ability to conveniently drive a compact and stylistic heavy vehicle in roads with heavy urban traffic, coupled with the high seating (offered in SUVs), which enables better visibility, prompts buyers to opt for the sub-compact SUVs.

The buying behavior and consumer preferences could adversely affect the SUV & sub-compact SUVs market. The main challenge faced by OEM or other manufacturers is when the fuel costs increase.  Since most of the SUVs have a lower fuel efficiency, it affects the buying preference of the end-users, as they would prefer buying small or compact car which would provide a better fuel efficiency. The increase in the raw material prices is also one of the biggest constraints for the automobile manufacturers, as it is generally difficult to pass the full extent of increased prices for manufactured components and raw materials onto customers in the form of price increases. Even if passed on to some extent, the recovery is typically on a delayed basis.

SUV Market
Published Date: Feb 2016 | Report Code: AT 4115
Inquiry Before Buying Request Sample
REQUEST FORM
By clicking the "Submit" button, you are agreeing to the Terms of Use and Privacy Policy.