The overall TV white space spectrum market is expected to grow from USD 1.89 million in 2016 to USD 53.07 million by 2022, at a CAGR of 74.30% from 2016 to 2022. End-use Application areas for TV white space spectrum range from rural internet access and urban connectivity to emergency & public safety, smart grid networks, and so on. The base year considered for the study is 2015, and the forecast is for the period between 2016 and 2022.

Smart grid refers to the technology that brings utility electricity delivery systems using computer-based remote control and automation. These smart grids are expected to revolutionize the existing electricity grid by allowing two-way communications, thereby improving efficiency, reliability, and sustainability of generation, transmission, and distribution of electric power. However, there are several issues associated with these grids, one being communication between the control center and smart metering installed at the customer premise.

To overcome these issues, several companies are using TVWS-based communication to provide middle-mile connectivity to facilitate smart metering and other smart grid solutions. As the smart grid application is not very bandwidth intensive, a limited number of TVWS channels are required for this application. In view of low bandwidth requirement, many countries have shown interest to adopt this communication network. For instance, Singapore is one of the first countries to deploy TVWS-based communication for various smart community projects. Through this TVWS communication network, the power grid control center helps to provide middle wire connectivity between control center and the smart metering at the customer base. Singapore has adopted this TVWS communication at CleanTech Park, Pulau Ubin micro-grid test bed, Punggol Eco-Town, and Jurong Lake District, among others. 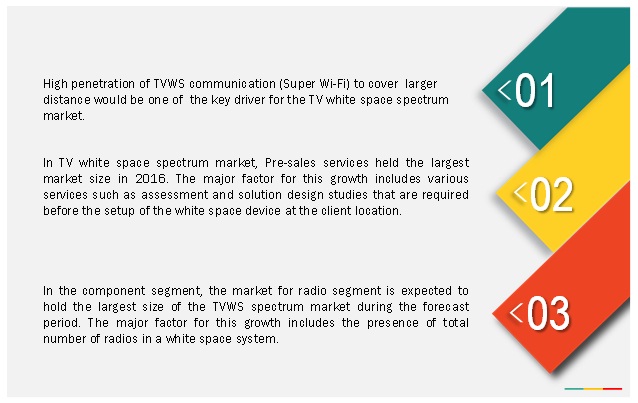 During this research study, major players operating in the TV white space spectrum market in various regions have been identified, and their offerings, regional presence, and distribution channels have been analyzed through in-depth discussions. Top-down and bottom-up approaches have been used to determine the overall market size. Sizes of the other individual markets have been estimated using the percentage splits obtained through secondary sources such as Hoovers, Bloomberg BusinessWeek, and Factiva, along with primary respondents. The entire procedure includes the study of the annual and financial reports of the top market players and extensive interviews with industry experts such as CEOs, VPs, directors, and marketing executives for key insights (both qualitative and quantitative) pertaining to the market. The figure below shows the breakdown of the primaries on the basis of the company type, designation, and region considered during the research study.

Both top-down and bottom-up approaches have been used to estimate and validate the size of the TVWS spectrum market and various other dependent submarkets. The key players in the market have been identified through the secondary research, and their market share in the respective regions has been determined through primary and secondary research. This entire research methodology involves the study of annual and financial reports of the top market players as well as interviews with industry experts (such as CEOs, VPs, directors, and marketing executives) for key insights (both quantitative and qualitative) on the TVWS spectrum market. All the percentage shares, splits, and breakdowns have been determined using secondary sources and verified through primary sources. All the possible parameters that affect the markets covered in this research study have been accounted for, viewed in extensive detail, verified through the primary research, and analyzed to get the final quantitative and qualitative data. This data has been consolidated and supplemented with detailed inputs and analysis from MarketsandMarkets and presented in this report.

This research report categorizes the TVWS spectrum market based on component, software and services, device, end-use application, range, and geography.

By Software and Services:

The overall TVWS spectrum market is expected to be valued at USD 1.89 million in 2016 and is estimated to reach USD 53.07 million by 2022, at a CAGR of 74.30% between 2016 and 2022. The market growth can be attributed to the high penetration of TVWS communications (Super Wi-Fi) to cover larger distances. The growing importance of IoT & M2M, urban connectivity, and smart grid networks is further expected to drive the market in the future.

The rural Internet access segment is expected to hold the largest size of the TVWS spectrum market during the forecast period.  The major factors contributing to this growth include the widespread adoption of TVWS technology to connect remote areas to the Internet. Earlier these areas were not serviced due to the lack of robust and affordable backhaul. Also, these services come at cost to the players, which involve regular maintenance. Furthermore, the immediate beneficiaries of this technology include the rural inhabitants in developed countries such as North America, Europe, and other Asian regions.

The market for portable white space devices expected to grow at the highest rate during the forecast period. Portable devices typically comprise laptops, Wi-Fi access points, tablets, and smartphones, among others. As these devices generate a relatively small spectrum footprint, they are allowed to operate in more places and on more channels than fixed devices.

The TVWS spectrum market in North America dominated the global market in 2015, accounting for a share of 72.1% of the total market. The growth of the market can be attributed to the adoption of TVWS regulations by the FCC. The FCC has approved the usage of TVWS technology in the 470–698MHz spectrum band without causing interference to the existing TV channels. This led to the various players exploring the opportunities of various end-use applications such as urban connectivity, vehicle broadband access, transportation and logistics, and IoT & M2M, among others. 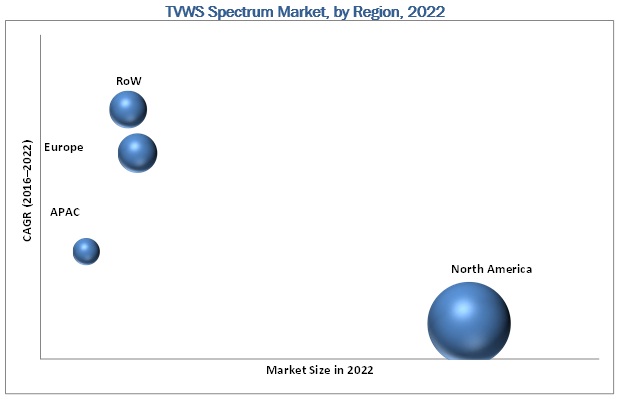 One of the major hindrances to providing Internet to the rural areas is the lack of robust and affordable backhaul. Various pilots and trials conducted worldwide proved that TVWS technology can be utilized to connect rural areas with broadband Internet connection. It is a cost-effective means to provide broadband to these areas, which is quite expensive using other existing technologies.

Some of the immediate beneficiaries of this technology include the rural inhabitants in developed countries such as North America, Europe, and other Asian regions. In addition, this technology is successfully tested by Microsoft in collaboration with the Government of Andhra Pradesh, India, to provide wireless Internet access to Srikakulam in Andhra Pradesh. Also, the Government of India is further planning to connect all villages in India through this TVWS technology.

Over the past few decades, the popularity of smartphones, tablets, and other mobile devices has led to the increased demand for wireless connectivity to skyrocket. The growth in wireless usage in the recent past has led to the unprecedented growth in wireless data traffic as wireless systems became increasingly central to social, economic, and political life. These factors led to significant spectrum crunch, enabling the governments to open unlicensed spectrum bands. For instance, in July 2016, FCC proposed to open 11GHz of high-band spectrum to wireless uses, increasing network capacity for 5G and IoT. This spectrum allows for data transfer rates up to 10Gbps, but signals can travel only short distances; therefore, small cell deployments would be needed to deliver most wireless services.

Therefore, utilizing TVWS spectrum for wireless communications offers significant advantages compared to conventional Wi-Fi. TVWS signals provide better coverage of about 10km diameter due to their superior range and ability to penetrate obstacles such as trees, buildings, and rough terrains. Furthermore, TVWS is capable of connecting a wide range of smart devices, providing a broadband range that will enable smart cities with connected home devices, sports stadiums, shopping centers, and municipal areas, among others.

Emergency and public safety is a communication network utilized by the emergency response and public safety organizations such as fire department, police force, and emergency medical teams responding to accidents, crimes, and natural disasters, among other events. There are several technologies for deploying emergency and public safety networks such as Wi-Fi, WiMAX, and Terrestrial Trunked RAdio (TETRA). However, the air interface operating in TVWS offers a fundamental advantage compared to the GHz spectrum due to the wider coverage range provided by the UHF/VHF wavelengths.

Additionally, the VHF/UHF bands also display more favorable characteristics in times of emergency response in disaster sites which may be demanding the high penetrating feature for critical operations such as a victim search party. As a trial deployment, in June 2011, the Yurok Reservation in Northern California, US, deployed first white space broadband communication for remote public safety environment. Through this, the Yurok community can access criminal databases besides having the ability to conduct live video training with their fire fighters, support clinics that can perform virtual telemedicine, and implement an emergency.

Critical questions would be

Standards and regulations for the use of TV band white spaces are not completely commercialized is restraining market growth. Moreover, complex limitations such as avoiding interferences with existing TV bands are a challenge for this market. This report describes the drivers, restraints, opportunities, and challenges pertaining to the TVWS spectrum market. Moreover, the report analyzes the current scenarios and forecasts the market until 2022.