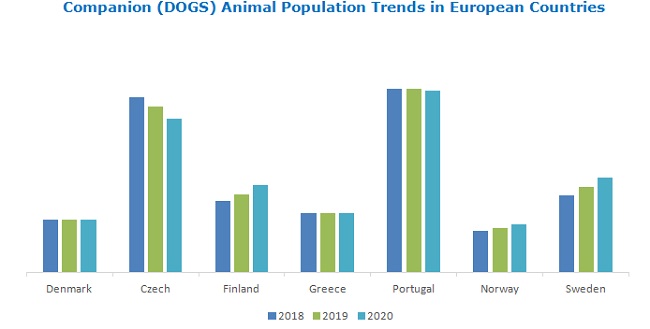 The animal type segment of the veterinary care market is bifurcated further into dogs, cats, pigs, poultry, cattle, and horses. Livestock animals such as cattle and poultry are expected to experience higher medicalization rates during the forecast years. In emerging economies such as the Philippines and Vietnam, earlier, poultry health was neglected, and owners used to discard the chickens in bulk during a virus outbreak. Similar was the condition of a few cattle farms. Unorganized farms were often neglected, and that hampered the overall meat production in such countries. However, the current laws have been framed to scrutinize the situation in farms and ensure maximum animal protection.

The decline in non-medicalized animals has positively impacted the veterinary care market.

Latin America is one of the regions that has experienced significant growth in animal health space for the past few years. Countries such as Brazil and Argentina have shown potential demand for veterinary products and services. Several major players in the veterinary space have considered expansion Latin America due to the enormous growth opportunities it offers in the animal health industry.

The leading players in the animal treatment market include Zoetis (US), Merck (US), Boehringer Ingelheim (Germany), Elanco (US), Ceva (France), Phibro Animal Health Corporation (US), Virbac SA (France), IDEXX Laboratories, Inc., Neogen Corporation (US), Heska Corporation (US) and others. These players undertake several strategic initiatives such as mergers, acquisitions, new product launches, and geographical expansions that helps them in sustaining market competition.

The research report categorizes the market into the following segments and subsegments:

Which countries will have maximum demand for veterinary products/services?

Which countries should veterinary companies target to obtain maximum profits?

What are the animal population trends in different countries?

What is the overall animal health scenario in emerging economies?

Demand for veterinary products and services was high in developed economies and was pretty much low in developing economies. However, due to the rise in disposable income in developing economies, such as Indonesia, the Philippines, and Colombia, there has been an improvement in the animal health scenario. Therefore, it is essential to understand the dynamics of Asia Pacific animal health market and Latin America Animal Health market that is projected in this report.

What are the different regulations pertaining to farm animal health in countries?

In this report, regulations pertaining to livestock health are highlighted to give a better understanding of the condition of farm animal health. Variation in regulations on farm animal health has been observed in different countries. For instance, livestock health is not compromised in developed countries, whereas, in emerging economies, we can still observe some drawbacks in the livestock regulatory framework. Countries having higher meat consumption often provide maximum preventive care to the livestock. However, in a few countries where livestock is imported have lower medicalization rates. .

This study involved the extensive use of both primary and secondary sources. The research process included a study of various factors affecting the industry to identify the segmentation types, industry trends, key players, competitive landscape, key market dynamics, and key player strategies.

The secondary research process involves the widespread use of secondary sources, directories, databases (such as Bloomberg Businessweek, Factiva, and D&B Hoovers), white papers, annual reports, companies house documents, investor presentations, and SEC filings of companies. Secondary research was used to identify and collect information useful for the extensive, technical, market-oriented, and commercial study of the animal treatment market. It was also used to obtain important information about the key players and market classification & segmentation according to industry trends to the bottom-most level, and key developments related to market and technology perspectives. A database of the key industry leaders was also prepared using secondary research.

In the primary research process, industry experts from both the supply and demand sides were interviewed to obtain qualitative and quantitative information for this report. Industry experts from the supply side include CEOs, presidents, vice presidents, marketing managers, product managers, sales executives, business development executives, and technology & innovation directors of companies providing veterinary care products. A breakdown of primary respondents is provided below:

The robust methodology was utilized while analyzing the animal treatment rate wherein, data was gathered through secondary sources and then was further validated through primary interviews. Animal population data, disease prevalence data, and diagnosis trends were studied through government publications and articles released from associations such as OIE. Further, the diagnosis rate and disease prevalence rate in animals was verified by conducting several primary interviews.

To complete the overall market engineering process and arrive at the exact statistics for all segments & subsegments, data triangulation and market breakdown procedures were employed, wherever applicable.

Veterinary Care Market
Published Date: Sep 2020 | Report Code: MD 7736
Inquiry Before Buying Request Sample
REQUEST FORM
By clicking the "Submit" button, you are agreeing to the Terms of Use and Privacy Policy.