FREE BROCHURE FREE SAMPLE REPORT
Report Code: TC 1098 Jan, 2010, by marketsandmarkets.com
Wireless backhaul is a part of the network that carries voice and data traffic from the mobile base to the operators’ core network. The global backhaul equipment market is growing tremendously mainly due to the increasing number of 3G subscribers all over the world. The increasing high-end applications such as mobile video conferencing, music downloading, and mobile internet games form the main market drivers for the wireless and mobile backhaul equipment market.

The market for wireless and mobile backhaul technology is getting oriented towards providing high data bandwidth and more cost-effective solutions. Besides, the overall growth is also being boosted by the growing popularity of WiMAX-based wireless broadband services with speeds higher than cable internet broadband. WiMAX and other evolving wireless and mobile technologies such as evolution data optimized (EVDO), high speed packet access (HSPA), and long term evolution (LTE) are bandwidth-intensive services that need backhaul technologies to support huge data transmission requirements.

The market, on the whole, is segmented into following sub categories: microwave, TDM & ATM, pseudowire, All-IP RAN, free space optics, satellite. Backhaul technologies play a vital role in enabling wireless and mobile services providers to offer subscribers high quality service while simultaneously increasing average revenue per user (ARPU). Backhaul technology is influenced by various factors such as bandwidth requirements, geographical location of cell site, and local regulations. Remote cell sites that are difficult to connect through physical links use a microwave backhaul to connect to mobile core network. Backhaul architecture consists of either one or a combination of more than one transport mechanisms.

Market players are focusing on providing high capacity, scalability, and reliable backhaul solutions to gain a competitive edge in the market. In the next few years, backhaul is expected to play a vital role in gaining new subscribers and retaining existing ones. First mover advantage in providing next generation network services
such as 4G will help operators gain a competitive edge.

The global wireless and mobile backhaul equipment market is segmented into four geographies: The U.S., Europe, Asia, and ROW. The U.S. formed the largest wireless and mobile equipment market in 2007. However, Asia is expected to be the largest market for backhaul equipments by 2014, mainly as Asia is expected to have the highest number of new cell sites deployment in next few years.

This research report categorizes the global wireless and mobile backhaul equipment market on the basis of different sub-types and countries; forecasting revenues, and analyzing trends in each of the sub segments.

On the basis of sub-types:

On the basis of applications:

On the basis of network topologies:

The growing trend of globalization is playing a critical role in the market growth of telecommunications; and hence acts as a market driver for the wireless backhaul market. The economic growth of developing nations and the spread of internet and mobile communication technologies have opened up new markets for wireless backhauling. The wireless backhaul market is, thus, set for huge growth and wireless backhaul is expected to become a mainstream data transfer technology within the next five years. The two major drivers of the backhaul equipment market include the increasing number of high-end mobile phone applications (such as mobile video conferencing, and mobile internet) and the increasing number of 3G subscribers. 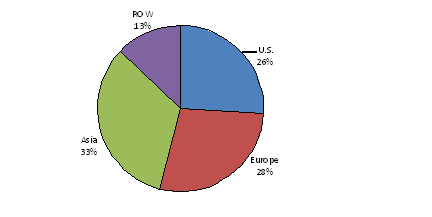 Interested in understanding the challenges in next generation Mobile Backhaul solutions.