[104 Pages Report] The antifreeze proteins market stood at USD 1.9 million in 2017; it is projected to grow at a CAGR of 30.0% from 2018, to reach USD 10.0 million by 2023. The base year considered for the study is 2017 and the forecast period is from 2018 to 2023. The main objective of the report is to define, segment, and project the global market size for antifreeze proteins on the basis of type, source, form, end-use, and region. It also helps to understand the structure of the market by identifying its various segments. The other objectives include analyzing opportunities in the market for stakeholders and providing a competitive landscape of market trends, analyzing the macro- and micro-indicators of this market, and projecting the size of the  market and its submarkets, in terms of value as well as volume. 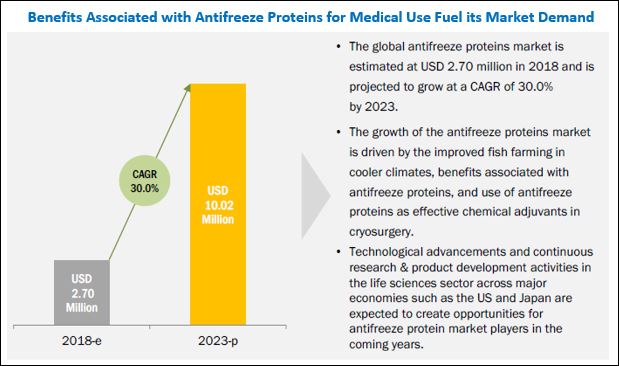 This report includes estimations of the market size in terms of value (USD million) and volume (g). The top-down and bottom-up approaches have been used to estimate and validate the size of the antifreeze proteins market and to estimate the size of various other dependent submarkets in the overall market. The key players in the market have been identified through secondary research; some of these sources are press releases, paid databases such as Factiva and Bloomberg, annual reports, and financial journals; their market share in respective regions have also been determined through primary and secondary research. All percentage shares, splits, and breakdowns have been determined using secondary sources and verified through primary sources. The figure below shows the breakdown of profiles of industry experts that participated in primary discussions. 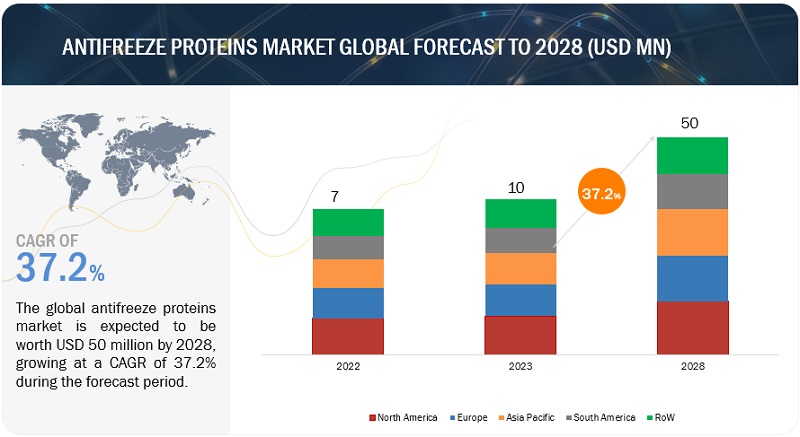 This report is targeted at the existing stakeholders in the industry, which include the following:

Antifreeze proteins are found in a wide range of organisms, including bacteria, fungi, plants, invertebrates, and fish. Multiple forms of antifreeze proteins are synthesized within each organism. Therefore, it is possible to select a single protein with appropriate characteristics and a suitable level of activity for a specific food product. Antifreeze proteins improve the quality of frozen food products such as ice creams that are consumed in the frozen state by inhibiting recrystallization and maintaining a smooth texture.

Advancements in technology to enhance fish farming in cooler climates

R&D in TU/e University (Netherlands) for extraction of antifreeze proteins from polar fish such as Antarctic fish, snow scorpionflies, and other cold climate fishes has revealed significant differences in the types of protein extracted. The study by TU/e indicates the difficulties in determining how “active” a protein is – an important consideration in its suitability for commercial applications.

R&D expenses are one of the largest direct costs incurred by companies while manufacturing any product. This includes the cost for research, labor, power & utilities, consumables, and others. Extraction of an antifreeze protein from fish is a complex process and involves huge R&D investments.

The antifreeze proteins market is highly consolidated with few players acquiring a share of over 90%. This includes companies such as Aqua Bounty Technologies, Inc. (US) and Unilever (Netherlands) which have successfully commercialized these products with several other companies having a strong R&D setup. Due to the strong market presence of these players, start-ups face difficulties in expanding their operations in this market space. Hence, it limits market competitiveness; thus, restricting innovation in the market.

On the basis of type, the market has been segmented as follows:

On the basis of formulation, the antifreeze proteins market has been segmented as follows:

On the basis of mode of end-use, the market has been segmented as follows:

On the basis of source, the market has been segmented as follows:

On the basis of region, the market has been segmented as follows:

The antifreeze proteins market is projected to grow at a CAGR of 30.0% from USD 2.7 million in 2018 to reach a value of USD 10.0 million by 2023. Antifreeze proteins, also known as ice structuring proteins or ice-binding proteins, bind to ice and subsequently inhibit the growth of ice crystals. They are biological antifreeze materials originally found in polar fish and also in certain plants and insects.

The variations with regard to the quality of grades of sources such as fish, plants, and insects determine the final application of the antifreeze proteins in the different industrial sectors such as food, medical, and cosmetics. Fish antifreeze proteins are widely preferred for applications such vaccinations, organ transplants, antiaging creams, cosmetics, and ice creams.

The antifreeze proteins market is segmented on the basis of end-use into medical, cosmetics, and food. The medical segment is estimated to dominate the market; this segment accounted for the largest share in 2017. Antifreeze proteins are used in cryopreservation and organ transplantation which is expected to fuel their demand for antifreeze proteins during the review forecast period. The dominance of this segment can be attributed to increasing R&D investments from pharmaceutical and biotechnology companies and ongoing research for vaccines.

On the basis of type, the market is segmented into Type I, Type III, and AFGP. The extraction process depends on the source and the type of antifreeze protein required. Recently, the demand for Type III has been rising due to the advancements in extraction technologies making them fit for cosmetic and food applications.

The market is also segmented on the basis of region into North America, Europe, Asia Pacific, and Rest of the World (RoW).

Europe and North America are estimated to be the dominant regions in the antifreeze proteins market in 2018. North America has several national research institutes which support biotechnology and life sciences research which in turn supports the growth of the market, identifying new areas of applications. However, North America is projected to be the fastest-growing market during the forecast period, due to increased awareness and government funding for proteomics and life sciences research and increasing R&D investments in the region.

Extraction of an antifreeze protein from fish is a complex process and involves significant R&D investments. The high cost of production and R&D expenditure is one of the major restraints of the antifreeze proteins market. Also, market consolidation of major dominating players limits the free entry of new players posing as a restraint to the  market.

Companies such as AF Protein (Aqua Bounty Technologies), Sirona Biochem, Unilever, Kaneka Corp. and ProtoKinetix provide a broad product portfolio for antifreeze proteins catering to the varied requirements of the market, along with a focus on the diverse end-use segments. They are also focused on innovation and are geographically diversified.

Increasing Investment in R&D and Innovations to Strengthen Demand

There is a continuous need for innovation among manufacturers in the antifreeze proteins value chain to gain a competitive edge. Companies have increased their investment in research & development to modify the formulation of existing products and meet the changing customer requirements, particularly in the cosmetics and vaccination industries. In 2008, Kaneka Corp. (Japan) collaborated in an R&D joint venture with Kansai University (Japan) for promoting open innovation in anti-freeze proteins mass-produced from radish sprouts.
Demand for custom-made solutions to suit new applications drives manufacturers to invest more in R&D innovation, which serves as an opportunity for the global market.

The rise in living standards and changes in lifestyles in developing countries contribute to the rise in demand for convenience foods, cosmetics, and vaccinations which indirectly impact the antifreeze proteins market. Emerging markets such as Brazil, Russia, India, and China are expected to offer significant opportunities for the growth of the market. This can majorly be attributed to the increasing R&D funding for pharma & biotech research in these countries. For instance, R&D investments in Asia increased by 7% from 2009 to 2014, in the same period, the R&D investments in China increased by 8% (Source: Battelle). The market for antifreeze proteins, therefore, is estimated to possess greater potential in the newer and untapped markets of China, India, Japan, Brazil, and the Middle East, among others. Players focus on tapping emerging economies with rising affluent urban demographics. Key players can increase their presence by increasing their consumer base to regions such as Asia Pacific, the Middle East, and Africa. Growth in these developing regions over the next few years exhibits promising opportunities for business expansions.

Limited use in food applications

There are a limited number of commercial applications for antifreeze proteins in the food industry, which limits the scope of the market. They are, however, used in the cosmetics, healthcare, and frozen foods industry.

Most companies are still in the R&D phase for exploring new applications for antifreeze proteins in the food sector. For instance, Kaneka Corporation (Japan) is still exploring the use of antifreeze proteins in frozen noodles, processed egg products, cooked rice, fish paste products, and desserts. With increased use in food applications, the market can achieve high growth.

*Details on Business Overview, Products Offered, Recent Developments Might Not Be Captured in Case of Unlisted Companies.