The global AF surgery product market was worth $791.5 Million in 2014 and is estimated to reach $1.73 Billion by 2020. This market is segmented on the basis of surgical procedures into catheter ablation and surgical ablation. Catheter and surgical ablation procedures are well accepted for the treatment of atrial fibrillation. Catheter ablation holds a larger market share and is poised to grow at a CAGR of 14.5% during the forecast period.

North America was the largest contributor (in terms of monetary value) in atrial fibrillation surgery market in 2014 and will continue to dominate this market by 2020. However, Asia-Pacific is expected to be the fastest growing market for the forecast period. Regulatory policies in Asia-Pacific countries are more adaptive and business-friendly, due to the presence of less-stringent regulations and data requirements. Additionally, increasing competition in mature markets will compel atrial fibrillation catheter ablation device manufacturers to focus on emerging markets in the coming years.

This report talks about the following segments in this market:

On the basis of geography, this market is segmented into: North America, Europe, Asia-Pacific and RoW. North America held the largest share in this market in 2014 and is expected to grow with the highest CAGR, including the number of procedures and revenue. On the other hand, Asia-Pacific is expected to be the fastest growing region due to the presence of a large patient population, growing medical tourism, and high focus of global market players on emerging Asia-Pacific countries such as China and India. 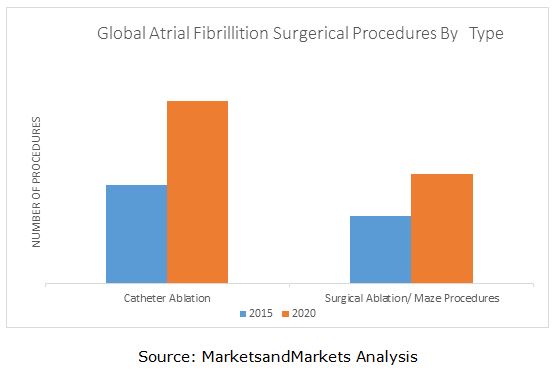