[127 Pages Report] The global catalyst carriers market was valued at USD 241.1 million in 2017 and is projected to reach USD 352.6 million by 2023, at a CAGR of 6.5% during the forecast period. In this study, 2017 has been considered as the base year and 2023 as the forecast year to estimate the Catalyst carriers market size. The market is witnessing growth due to the increasing usage in petroleum derivatives and growing energy demand in fast-growing emerging economies. Stringent environmental regulation pertaining to petroleum treatment and demand for efficient catalysts across all industrial verticals is also increasing the consumption of catalyst carriers. 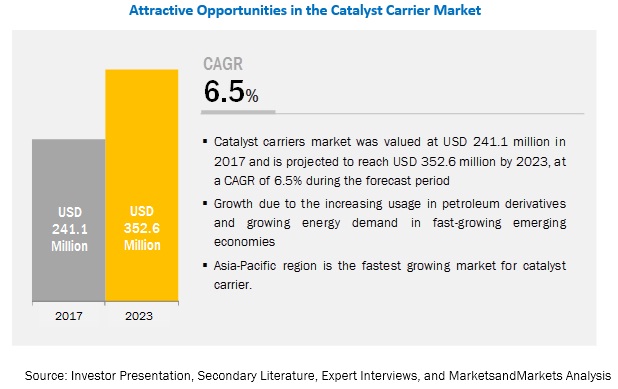 Growing consumption of petroleum derivatives to meet the increasing energy demand is the major driving factor to drive the growth of catalyst carriers. This growth of this market is further driven by stringent regulations associated with petroleum treatment. Demand for effective catalysis across industrial verticals is another major factor that is expected to drive catalyst carriers market. Incorporation of advanced technologies in chemical synthesis diminishing the use of catalysts, this in turn restraining the catalyst carriers market.

Ceramic catalyst carriers are estimated to be the fastest-growing type segment of the catalyst carriers market during the forecast period. The growth of the segment is mainly attributed to its growing consumption in petroleum refining in catalytic cracking hydroprocessing and catalytic reforming as a support material with the catalyst. They are also used in chemical synthesis of various hydrocarbons and the Haber’s process.

Sphere shaped catalyst carriers is expected to be the fastest-growing application segment of the catalyst carriers market during the forecast period. The growth of the segment is mainly attributed to its superior properties such higher stiffness, lower thermal expansion, lighter weight, increased corrosion resistance, and higher electrical resistance than its counterparts.

Asia Pacific is the fastest-growing market for catalyst carriers.

This study has been validated through primaries conducted with various industry experts globally. These primary sources have been divided into 3 categories, namely, company, designation, and region. 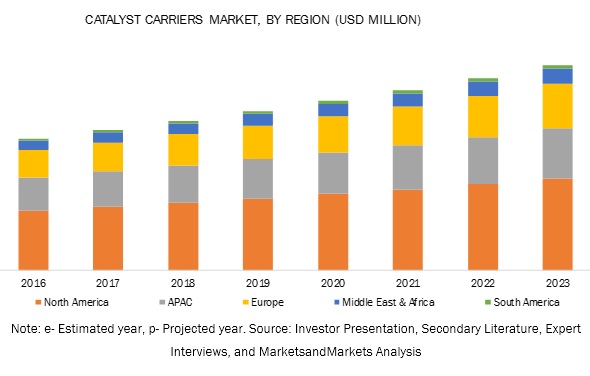 The rapidly increasing demand for gasoline and diesel has increased the requirement of raw materials for their production. However, the limited supply of raw materials increases the overall cost of production. This factor has attracted manufacturers toward refinery catalysts, as they help extract relatively more diesel and gasoline from the same amount of crude oil. Thus, the refinery catalysts market is improved by the fact that the efficient use of catalysts can help the manufacturer’s better address the increasing energy demand. Thus, due to aforementioned factor the demand for refinery catalyst is expected to increase, proportionally increasing the demand for catalyst carrier which are used to give support and provide large surface area to refinery catalysts. Moreover, apart from the use of gasoline and diesel more than 200 by-products including fuels such as kerosene, jet fuel, ethane, LPG, fuel oils, and derivatives such as alkenes (or olefins used to manufacture plastic), lubricants, wax, sulfur, tar, isopropyl alcohol, butyl, and polypropylene are used in various industries. The extraction of these derivatives from petroleum involves the use of catalyst and its carrier which are used to increase the efficiency of recovered products.

The International Energy Agency (IEA) has estimated that fuel consumption and emissions of CO2 from the world’s cars will roughly double between 2000 and 2050. CO2 emissions from fossil fuel combustion will increase by 45% from 2006 to 2030, with 97% of this increase occurring in non-OECD (Organization for Economic Co-operation and Development) countries. One-fifth of this increase is the result of global transport-related GHG emissions–98% of which will occur in non-OECD countries. In order to support global reductions in CO2 emissions from the transport sector, technical innovation will have to go hand-in-hand with supporting policies. New environmental regulations to reduce air pollution by decreasing the sulfur content for gasoline and ultra-low sulfur content in diesel (ULSD) have necessitated the process of petroleum treatment, which in-turn is dependent on the kind of catalyst and support material used in the refining. Catalysis is a major factor in petroleum refining as the process carried out after crude unit are catalytic. For instance, gasoline with low aromatic content (benzene/naphthalenes) is produced after alkylation of light olefins with isobutane in the presence of hydrogen and metallic catalysts. Thus, for efficient conversion to obtain high product yield the use of catalyst with a carrier is imperative. This is expected to drive the demand for catalyst carrier.

Demand for efficient catalysis across all industrial verticals

Catalyst are inevitable part of chemical industry. They are used across wide range of industries such as petrochemicals and chemical synthesis to provide efficient reaction output. Due to the growing need for cleaner fuels and heavy and sour crudes, the demand for cracking and hydroprocessing catalysts along with its support is increasing. Global catalyst carrier’s consumption in both petroleum refining and chemical synthesis has increased due to the growing demand for clean fuels and petroleum-based derivatives, thus, driving the demand for catalysts carriers. Catalyst are used in combination with catalyst carriers to enhance its performance because catalyst carriers and support materials provide high-geometric surface area, uniform packing, and even flow distribution

Catalyst carriers are basically made from metal and non-metal oxides such as alumina, rare-earth metal oxides, zirconia, silica and various other metals. The use of rare earth elements as catalysts carriers improves the hydrothermal stability in the extraction process. However, the cost involved in using these elements increases the overall cost of manufacturing due to their low availability. Catalyst carriers and the support materials used with catalyst are an important source of product yield efficiency improvement potential. Around 90% of chemical processes uses catalysts for efficient production, resulting in the usage of catalysts in higher volume. Thus, to offset the usage of catalyst in high volume and ensure its enhanced performance the use catalyst carriers is important. However, the fabrication of catalyst carriers is both time and capital intensive. Mostly they are customized and tailored for a specific catalyst and chemical reaction. Thus, it is a research-driven market with innovations being implemented periodically. In order to reduce the costs and time of overall process, companies are actively seeking for high performance technology based alternatives, so as to minimize the usage of catalysts carriers. This is expected to restrain the growth of the global catalyst carrier market.

This research report categorizes the global Catalyst carriers market based on type, application, end-use industry, and region, and forecasts revenue growth and provides an analysis of trends in each of the submarkets.

Based on Product Type

Based on Material Type

Based on Surface Area

Based on End-use Industry