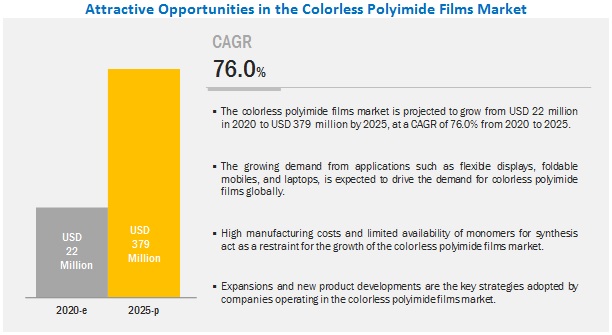 Based on application, flexible displays segment accounted for the largest share in 2019

Based on application, the flexible displays segment accounted for the largest share of the colorless polyimide films market in 2019. Currently, displays can be classified according to their degree of flexibility: flat displays are made of plastic or another non-glass backplane for the benefit of lightness or ruggedness; formed displays are bent once, such as curved automobile dashboard but cannot be flexed further; flexible displays, on the other hand, may be bent or flexed but cannot be rolled. The prospect of flexible displays is promising, but their development is subject to current technical knowledge and manufacturing capabilities. Researchers have been focusing on developing advanced materials, and at the forefront of making flexible displays a reality is the optical polymer film termed as colorless polyimide.

Based on end-use industry, the electronics segment accounted for the largest market share in 2019

Based on end-use industry, the electronics segment accounted for the largest share in 2019. Colorless polyimides provide excellent thermo-mechanical properties, have high chemical resistance, and are also optically transparent. These properties are suitable for manufacturing electronics such as flexible displays, flexible printed circuit boards, and lighting equipment. Fabricating temperatures may go as high as 300°C, and conventional aromatic polyimides tend to disintegrate or change their color at such high processing temperatures. Hence, the demand for colorless polyimides is expected to increase as manufacturing technologies become more efficient and consistent.

Polymeric optical films with high thermal stability, high dimensional stability at elevated temperatures, high optical transparency, and high tensile strength are widely required in modern electronics for use as substrates in flexible displays and to cover windows for flexible active-matrix organic light-emitting diode (AMOLED) devices. However, conventional polymeric optical films such as polyolefin and polyester films have poor thermal and dimensional stability while standard high-temperature polymer films such as polyimides have a highly colored appearance and poor optical transparency in the visible light region. 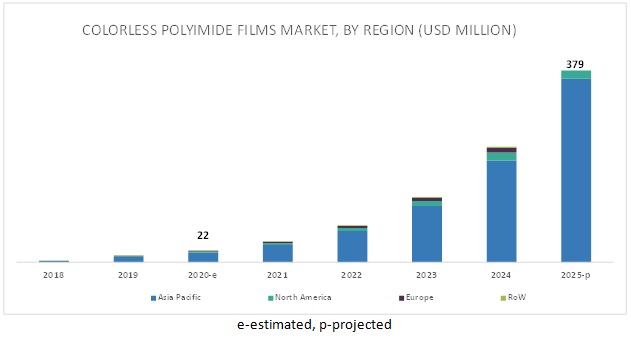 Innovation, price deflation, and rising household incomes, especially in emerging markets in Asia Pacific, have resulted in high demand for consumer electronics products in the region. Asia Pacific countries are well-positioned to enter the field of flexible electronics and dominate their commercial applications. Countries of this region have numerous large industrial groups with extensive manufacturing capabilities in sectors directly relevant to flexible electronic devices such as microelectronics, optoelectronics, printed electronics, photovoltaics, and flexible displays. Research capabilities in these countries have become adept due to government support, which includes government laboratories, universities, and company R&D centers. Countries like China, South Korea, Taiwan, and Japan are the major countries in this region’s colorless polyimide films market. These countries have not only colorless polyimide fabricating prowess but also major electronic manufacturing companies that help maintain the supply-demand equilibrium.

This research report categorizes the colorless polyimide films market based on application, end-use industry, and region, and forecasts revenues as well as analyzes trends in each of these submarkets.

Based on application, the colorless polyimide films market has been segmented into:

Based on end-use industry, the colorless polyimide films market has been segmented into:

Based on the region, the colorless polyimide films market has been segmented into:

Key Questions Addressed by the Report:

*Details on Business Overview, Products & Services, Key Insights, Recent Developments, and Business Strategy might not be captured in case of unlisted companies

As a part of the secondary research process, sources such as Hoovers, Bloomberg, BusinessWeek, Reuters, and Factiva were referred to for identifying and collecting information for this study on the colorless polyimide films market. Other secondary sources included annual reports, press releases & investor presentations of companies, white papers, certified publications, articles by recognized authors, authenticated directories, and databases.

Secondary research was mainly conducted to obtain key information about the supply chain of the industry, the total pool of players, market classification & segmentation according to industry trends to the bottom-most level, regional markets, and key developments undertaken from both, market- and technology-oriented perspectives.

After arriving at the overall size from the estimation process explained above, the total market was split into several segments and subsegments. The data triangulation and market breakdown procedures were used, wherever applicable, to complete the overall market engineering process and arrive at the exact statistics for all segments and subsegments of the market. The data was triangulated by studying various factors and trends from both, the demand and supply sides. In addition to this, the market size was validated using both, the top-down and bottom-up approaches.

Objectives of the Report