[51 Pages Report] The global renewable energy market size is projected to grow from USD 184.3 billion in 2020 to USD 226.1 billion by 2021, at a CAGR of 22.7% in the realistic scenario during the forecast period. The IEA estimates the global oil demand at 99.9 million barrels a day in 2020, down around 90,000 barrels a day from the demand in 2019. As renewable energy is the best and environment-friendly alternative to oil, the demand for renewable energy and related projects is likely to increase in the near future. This market will be less impacted during the COVID-19 period. 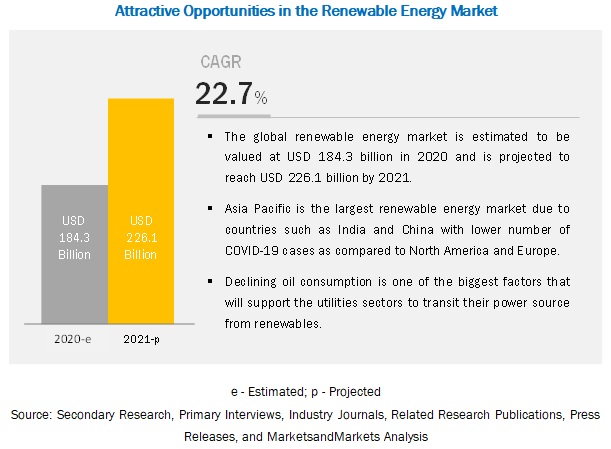 The solar segment is estimated to account for the largest share in 2020, followed by the wind segment in the renewable energy market

The solar segment is estimated to be the largest renewable energy market, followed by the wind segment. The adoption of new solar technologies such as floating solar farms and Building-Integrated Photovoltaics (BIPV) solar technology is likely to increase during the forecast period (from 2019 to 2021). The installation cost of floating solar farms is lesser than that of traditional land-based solar panels as there is no need to clear land or treat the soil.

In the wind segment, wind energy producers are likely to shift toward producing energy through their offshore wind farms during the forecast period. Offshore wind farms attract higher O&M costs in comparison to onshore wind farms due to higher turbine maintenance costs, higher logistics costs, and a lack of a skilled workforce.

The residential subsegment in the captive end-user segment is the largest market as compared to industrial and commercial subsegmentS. The majority of the companies have given work from home facility to their employees; however, these companies have to keep their office PCs in the working mode so that the employees can get remote access. Also, many countries such as Germany, India, Australia, the US, China, Spain, France, Russia, and Italy have imposed strict lockdown and asked the citizens to quarantine themselves, which is further expected to increase the demand from the residential subsegment during the forecast period. 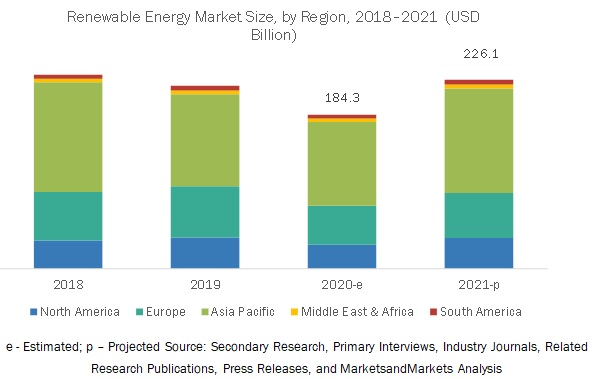 Asia Pacific is estimated to be the largest market during the forecast period. The region has a high demand for electricity due to a rise in urbanization, rapid industrialization, and population growth. According to the latest report of IRENA, the region had a total solar installed capacity of 52,144 MW in 2019, which has decreased by 25% from the previous year. Also, as per the OECD report on the global COVID-19 pandemic, the electric power industry in China has witnessed a 3.67% deviation from the benchmark set in 2019. In the coming weeks, the majority of Chinese renewable energy producers are resuming their operations. The demand during the forecast period is expected to be high as these companies have to reach their clean energy targets in the second half of 2020.

Vestas was founded in 1945 and is headquartered in Arhus, Denmark. The company, through its wind turbines and wind power plants business segment, manufactures wind turbines and rotor blades. It has a presence in major geographical markets through its subsidiaries. The company employs a large workforce, with more than 15,000 employees globally. Major subsidiaries of the company include Vestas - Celtic Wind Technology Ltd, Vestas Blades Deutschland GmbH (Germany), Vestas Blades Italia S.r.l. (Italy), Vestas Wind Technology Co. Ltd. (China), and Vestas Blades America Inc. (US). The company competes with Sinoi (Germany), Acciona (Spain), Enercon GmbH (Germany), Suzlon Energy Ltd. (India), and Gamesa (Spain). Vestas has reduced production to a minimum in its Spanish factories. At its blade factory in Daimiel, minimum production of blade root continues as this is an essential segment to its global supply chain, and a complete shutdown would create a disproportional disruption. The generator factory in Viveiro is closed except for some minimal logistic services.

Scope of the report

This research report categorizes the renewable energy market based on technology type, end-user, and region.

Based on technology type:

Key questions addressed by the report:

What are factors responsible for the growth of the market even during the COVID-19 pandemic?

The growth of this market is likely to be driven by the reduction in oil consumption, owing constricting travel and broader economic activity.

Which technology is leading the market of renewable energy during the forecast period?

The solar segment is expected to lead the market during the forecast period. As solar cells one of the fastest-growing renewable energy technologies. The cost of manufacturing solar panels has drastically decreased, making them the cheapest means of producing electricity.

Which end user provides the most opportunity for growth?

The utilities segment to provide the most lucrative opportunity for the growth of the renewable energy market. Utilities or power producers can be broadly defined as an entity engaging in the generation and/or delivery of energy to consumers in a specific geographical area/jurisdiction. The Renewable Energy Buyers Alliance (REBA), a trade association composed of large corporate buyers, agrees that the financial fallout of COVID-19 will not affect corporate decarbonization goals.

Which region is expected to dominate the renewable energy market during the forecast period?

Asia Pacific dominate the renewable energy market as this region will face no shortage of renewable energy component parts. As China has already relocated some of its production capacity in neighboring countries such as Vietnam and India. .

The study involved four major steps in estimating the size of the renewable energy market. Exhaustive secondary research was done to collect information on the market, as well as the parent market. The next step was to validate these findings, assumptions, and sizing with industry experts across the value chain through primary research. Both the top-down and bottom-up approaches were employed to estimate the complete market size. After that, market breakdown and data triangulation were used to estimate the market size of segments and subsegments.

Secondary research was mainly conducted to obtain key information about the industry’s supply chain, COVID-19 impact across the stakeholders of the supply chain, total pool of key players, market classification & segmentation according to the industry trends to the bottom-most level and geographical markets. It was also used to obtain information about the key developments from a market-oriented perspective.

After arriving at the overall market size from the estimation process explained above, the total market was split into several segments and subsegments. The data triangulation and market breakdown procedures were employed to estimate the global renewable energy market due to COVID impact and arrive at the exact statistics for all segments and subsegments, wherever applicable. The data was triangulated by studying various factors and trends from the demand and supply sides. Along with this, the market size was validated using both the top-down and bottom-up approaches.