The growing demands for energy, energy sustainability, and GHG repercussions of conventional sources of energy have increased the utilization of renewable energy sources. The support, policies, and regulations, and investments extended by the government in this sector are boosting growth in the renewable energy market. The renewable sources of energy covered in the report are solar photovoltaic, wind, bio-fuels, hydro, and geothermal. Major inhibitors identified for the market are high capital cost, intermittent energy supply from sun and wind, insufficient feed stock for bio-fuels, and accessibility and availability issues with geothermal energy.

Renewable Energy Market report covers policies and regulations, market dynamics, competitive landscape, company profiles of major players selected on the basis of their recent developments and revenue earnings, and patent analysis for each of the aforesaid renewable power sources. The report also covers market trends and forecasts in terms of volume (MW/Gallons) and value ($billion) and segments the market by geography, technology, and applications from 2010 to 2015.

Renewable Energy Market overview section covers burning issues in the market such as environmental concerns, co-pressured and geo-pressured resources, social and political concerns over installation of hydro power project, and insufficient food-based feedstock for bio-fuels production. It identifies winning imperatives such as collaborations and geographic expansion for key players and discusses about the most adopted policies and regulations governing utilization of renewable sources of energy. It also covers Renewable Energy Market share analysis of these renewable sources of energy.

Hydro power is one of the largest sources of renewable energy in the world. It fulfills about 16% to 20% of global demand for electricity depending on capacity factors. The consumption of hydro power in 2009 was accounted for 3268 TWh, which is 1.3% more than the figures for 2008. More than 60 countries use hydro power as the major source for electricity generation; with China leading the pack followed by Brazil, Canada, and the U.S.

The solar photovoltaic market witnessed a relatively small growth rate in terms of demand in 2008-2009. The reason for the slow growth rate in market for 2008, 2009 and 2010 was low capital investment from venture capitalists due to the global slowdown. The only region to witness huge demand during this period was Spain owing to liberalization in that country’s energy policies. The applications of solar PV electricity include consumer products, automotive applications, space applications, grid connected power supply, residential and commercial power supply, and water pumping.

The global wind energy market growth is supported with addition in capacities year on year. In 2000, around 3,760 MW of wind energy capacity were installed globally. The new installations reached 38,343 MW in 2009. In the same year, the global total energy capacity was 158,505 MW; which grew from 17,400 MW in 2000. Globally, U.S. had the largest installed capacity in 2009 with a share of 22%. It was followed by China, which held 16% share of the global installed capacity. The other major countries in the wind energy market are Germany, Spain, India, and Italy.

The solar energy market is segmented by products such as crystalline silicon, thin film, and others and geographic break down covers Americas, Asia, Europe, and Rest of the World.

The bio-fuels market is segmented by products such as bio-ethanol and bio-diesel and geographic break down covers the U.S., Brazil, France, and others.

The market for geothermal energy is segmented by applications such as power generation and direct use and the geographic break down covers Americas, Europe, Asia-Pacific, and rest of the world.

Hydro power market is segmented on the basis of geography such as Americas, Europe, Asia Pacific, and Rest of the World.

Wind power market is segmented by technology as horizontal and vertical axis wind turbines and geographic break down covers the U.S., Europe, Asia, and Rest of the World.

Renewable energy includes sources of energy that replenish faster when compared to fossil fuels such as coal and petroleum. The sources of renewable energy are sun, hydro, wind, geothermal, and biofuel. The research is focused towards the segments that are commercially viable and used globally.

Renewable Energy Market is one of the most dynamic industries in the current economic scenario. The global renewable energy sector is expected to grow with a CAGR of 7.5% from 2010 to 2015. The growth is boosted with increasing investments in the sector by governments, venture capitalists, and corporates. The industry is estimated to have attracted investments to the tune of $150 billion in 2009. Moreover, the increasing awareness about renewable energy as a clean source and depletion of fossil fuels are the other reasons fueling the growth of renewable energy sector. Renewable energy is forecasted for five energies; namely hydro, biofuels, wind, solar PV, and geothermal. Hydropower was estimated to have the maximum revenues in 2010 with a share of 55%; followed by wind and biofuels with 15% each. 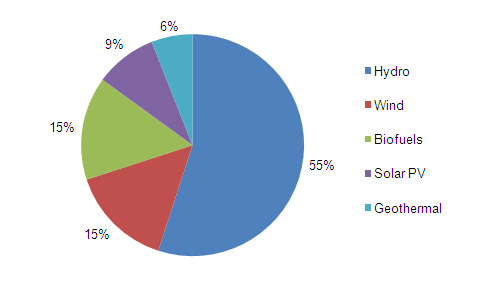 Among all the energies, hydro energy is supposed to generate the maximum revenues in 2015 due to huge preinstalled capacities across the globe. The global renewable energy market is expected to grow with a CAGR of 7.5% from 2010 to 2015.