[166 Pages] The global critical power and cooling market is expected to grow from an estimated USD 16.87 Billion in 2016 to USD 25.80 Billion by 2021, at a CAGR of 8.88%, from 2016 to 2021. The factors driving the market include a rise in the number of data centers due to digitalization and cloud computing, increasing demand for improved cooling efficiency in data centers, the need to reduce anomalies in power supply, and regulations and initiatives by institutes and associations. High investment costs and environmental and health hazards are key restraints for the growth of the market.

* Core competencies of the companies are captured in terms of their key developments, SWOT analyses, and the key strategies adopted by them to sustain their position in the market

For company profiles in the report, 2015 has been used as the base year.

This research study involved the extensive use of secondary sources, directories, and databases (such as Hoover’s, Bloomberg, Businessweek, and Factiva) to identify and collect information useful for this technical, market-oriented, and commercial study of the critical power and cooling market. The points mentioned below explain the research methodology applied in this report.

After arriving at the overall market size, the total market has been split into several segments and subsegments. The figure given below shows the breakdown of the primaries on the basis of company type, designation, and region. 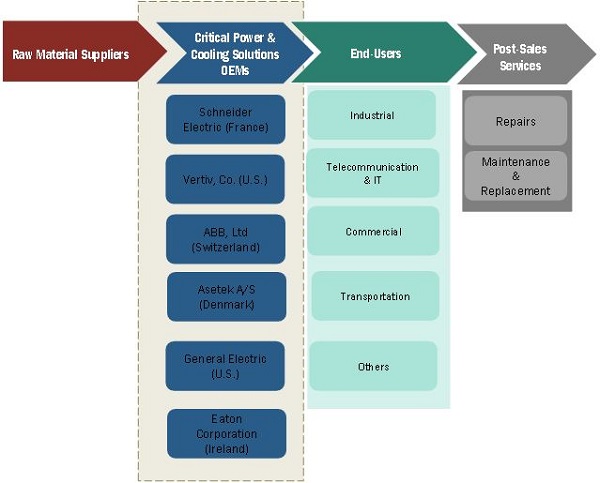 The stakeholders included in this report are as follows:

“The study answers several questions for the stakeholders, primarily which market segments to focus on in the next two to five years to prioritize efforts and investments.”

With the given market data, MarketsandMarkets offers customizations as per the client’s specific needs. The following customization options are available for the report:

The critical power and cooling market is projected to grow at a CAGR of 8.88%, from 2016 to 2021, to reach USD 25.80 Billion by 2021. A rise in digitalization and cloud computing leading to an increase in demand for data centers, increasing demand for improved cooling efficiency in data centers, a need to reduce anomalies in power supply, and regulations and initiatives by institutes and associations are the major factors driving the market.

The report segments the critical power market, by end-user, into industrial, commercial, IT and telecommunication, government and defense, and transportation. The end-users of the cooling solutions market include industrial, commercial, IT and telecommunication, transportation, and others (government buildings and military applications).

The global banking and financial sector is expanding on a large scale with the advent of IT. However, unplanned downtime and IT failure may affect ongoing transactions. Installation of data centers with efficient and reliable power solutions can overcome such failures. This increases the demand for critical power and cooling in the BFSI sector.

Air conditioning units are widely used at data center facilities. They provide precision air conditioning and maintain the equipment at ideal operating temperatures. Thus, the increasing number of data centers is expected to boost the market, during the forecast period.

In this report, the critical power and cooling market has been segmented into the following regions, North America, Europe, Asia-Pacific, Latin America, and the Middle East & Africa. North America is currently the largest market for critical power and cooling, and the Asia-Pacific market is projected to grow at the highest CAGR, during the forecast period. The U.S. accounted for the majority share in North America in 2016. The increasing number of data centers and data processing power and increasing demand for information storage are factors driving the market in the U.S. and Canada. The figure given below shows the regional scenario of the market from 2016 to 2021. 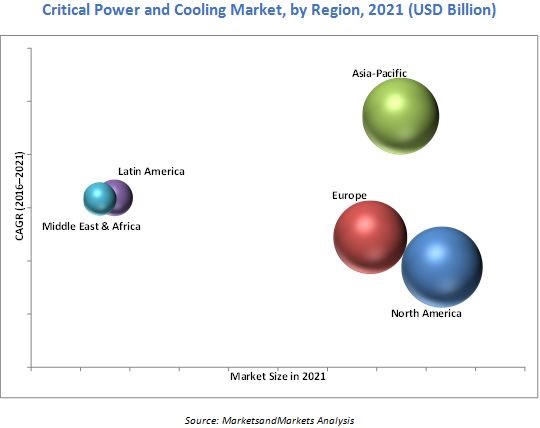 High investment costs and environmental and health hazards are key restraints for the growth of the critical power & cooling market.

*Details on Overview, Products & Services, Strategies & Insights, Developments and MnM View Might Not Be Captured in Case of Unlisted Companies.