The main objective of this report is to define, describe, and forecast the DNS, DHCP, and IPAM Market (DDI market) on the basis of segments which includes components, deployment type, applications, organization size, verticals, and regions. The report provides detailed information regarding the major factors influencing the growth of the market (drivers, restraints, opportunities, and industry-specific challenges). The report forecast the market size with respect to four main regions, namely, North America, Europe, Asia-Pacific (APAC), and Rest of the World (RoW). The report strategically profiles key players and comprehensively analyzes their core competencies. This report also tracks and analyzes competitive developments such as mergers and acquisitions, new product developments, and Research & Development (R&D) activities in the DDI market.

The research methodology used to estimate and forecast the DDI industry begins with the collection and analysis of data on key vendor product offerings and business strategy through secondary research such as press releases, investor presentations of companies, white papers, technology journals, certified publications, and articles from recognized authors, directories, and databases. The vendor offerings have also been taken into consideration to determine the market segmentation. The bottom-up procedure was employed to arrive at the total market size of the global DDI market from the revenue of the key software tool providers and service providers in the market. After arriving at the overall market size, the total market was split into several segments and sub-segments, which were then verified through primary research by conducting extensive interviews with key people, such as CEOs, VPs, directors, and executives. The data triangulation and market breakdown procedures were employed to complete the overall market engineering process and to arrive at the exact statistics for all segments and sub-segments. The breakdown of profiles of primary is depicted in the below figure:

The research report segments the DDI market into following submarkets:

The following components play a major role in DDI

Following are the applications of DDI

There are two deployment alternatives for DDI

DDI practices can be adopted across various industries such as

Increasing trend of BYOD at workplaces to drive the global DDI Market to USD 467.8 million by 2022

Advancement in Internet of Things (IoT), technological developments in computing power, expansion of existing DDI solutions and adjacent network services will fuel the growth of DDI market. The DDI solution and services has demonstrated the capabilities to maintain network dynamics securely and smoothly, which has helped organizations to reduce their maintenance and operational expenses.

Various industries such as healthcare, education, and retail have been increasingly investing in IT and network infrastructure to enhance their core operations. Education is expected to be a prominent vertical to explore in the DDI space, considering the factors such as proliferation of BYOD across educational institutions. In order to create a secure network infrastructure, universities have been adopting DDI solutions and services. For instance, in July 2014, Southern Illinois University (SIU) integrated Efficient IP DDI solution to manage IP addresses and DHCP network services.

DDI solution and services is gaining traction across verticals as organizations have realized reliability on network performance during the last 10 years. Various traditional approaches for managing the network IP are unreliable when the network sizes become complex and large. In such scenario, DDI solutions take a holistic approach in understanding the various critical factors of the network parameters to take action in real time before the failure of the network. DDI solutions offers crucial benefits to enterprises such as centralization of IT network management, enhanced visibility, advanced automation, and administration of IP addresses. Opportunities in the DDI market include the reduction of OPEX due to improved and centralized management of IP based services. Additionally, improved scalability and high adoption by SMEs is expected to boost market growth.

Adoption of virtualization by enterprises in varied industry vertical would increase the growth of DDI market. Virtualization in IT is a process to create a virtual (rather than real) version of any hardware system to perform dedicated tasks by using computer network resources. Businesses are gradually adopting virtualized resources to improve efficiency and reduce OPEX. Virtualization technology is efficient for large enterprises but is also adopted by SMEs. Most of the businesses use virtualization to allocate system resources according to requirement, which includes the management of IP and server addresses. Implementing virtualization by cloud computing requires secure network interface, DHCP and DNS automation, secure secondary storage, secure run-time environment and robust IPAM. The rise in the number of IP addresses associated with the network is one of the factors that are likely to aid the DDI adoption. 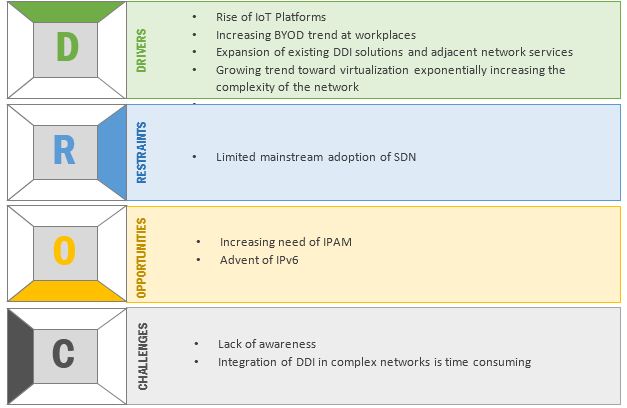 The DNS, DHCP, and IPAM (DDI) market is expected to grow from USD 219.8 Million in 2017 to USD 467.8 Million by 2022, at a Compound Annual Growth Rate (CAGR) of 16.3% during the forecast period. Several factors such as increase attacks on DNS server, emergence of IOT platforms, proliferation of BYOD at workplace, and reduction in OPEX are responsible for the growth of the DDI market. Verticals such as telecom and IT, Banking, Financial Services and Insurance (BFSI), government & defense, healthcare & life sciences, education, retail, manufacturing, and others including media & entertainment, energy & utilities, and hospitality has boosted the market.

The cloud deployment type is expected to grow at the highest CAGR during the forecast period. It is a dynamic deployment model in the DDI market, which is implemented according to the network requirements. One of the major advantages of the cloud-based deployment is that it allows the enterprises to know the real-time condition of the network from a remote location. It also reduces the deployment cost as nothing has to be stored on premise, which significantly reduces the initial investment and the maintenance cost required to maintain these solutions. Enterprises are considering cloud deployment as this solution provider offers remote network management at competitive pricing.

The small and medium enterprises (SMEs) segment is expected to grow at the highest CAGR in the DDI market during the forecast period. SMEs had been majorly depended on manual records and spreadsheets to maintain their networks. This was majorly due to the lack of awareness and budget constraints. However, with the proliferation of mobile devices and advent of IPv6, benefits of adopting DDI solutions and services is expected to drive the adoption of DHCP, DNS, and IPAM in SMEs during the forecast period.

The DDI solutions is being increasingly adopted by verticals such as telecom and IT, BFSI, government & defense, healthcare & life sciences, education, retail, and manufacturing, thereby fueling the growth of DDI market across the globe. The telecom and IT vertical holds the largest market size during the forecast period. 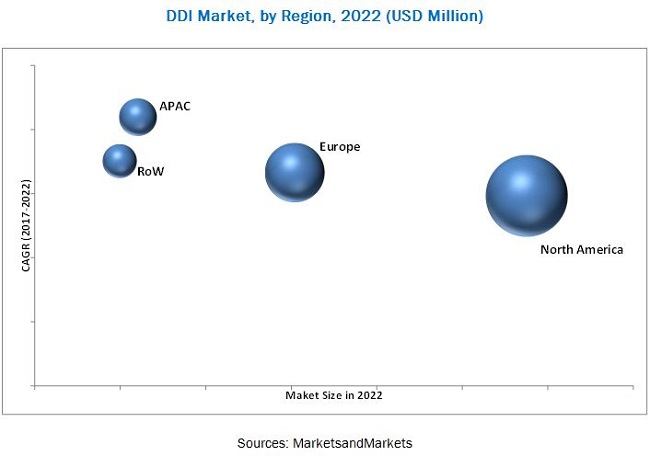 The global DDI Market has been segmented on the basis of regions into North America, Europe, Asia-Pacific (APAC), Rest of the World (RoW) to provide a region-specific analysis in the report. North America is expected to have the largest market share and is expected to dominate the market from 2017 to 2022 because this region accounts for the major chunk of the DDI solutions and services market, and the region is considered to be one of the most advanced regions with regards to the technology adoption and infrastructure.

Rapid change in technologies is resulting in new solutions and software tools for enterprises. The adoption of these solutions by enterprises has always been difficult due to plenty of emerging technologies. Most of the organizations still use manual ways to record and maintain IP addresses by using spreadsheets, manual DNS & DHCP administration, and IPAM. However, networks become more complex when the number of devices increases, that leads to inadequate IPAM and reduces availability of enterprise resources. This is one of the challenges impacting the long term growth of the DDI market.

Several factors such as increase attacks on DNS server, emergence of IOT platforms, proliferation of BYOD at workplace, and reduction in OPEX are responsible for the growth of DDI market. Increased implementation of DDI solution in industry verticals such as telecom and IT, banking, financial services and insurance (BFSI), government and defense, healthcare and life science, education, retail, manufacturing, and others including media & entertainment, energy & utilities, and hospitality has boosted the DDI market.

Apart from established players in the industry, the new entrants in the market are introducing new DDI solutions to lure customers across multiple applications 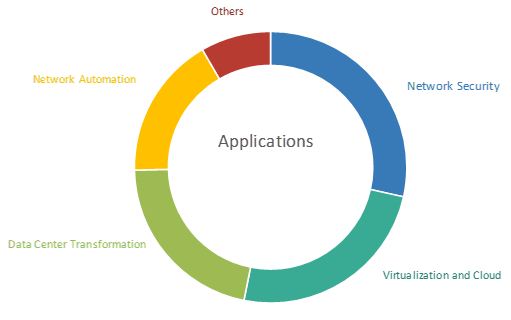 Network security consists of the approved policies and protocols that prevent and monitor unauthorized access and modification of a computer network and its resources. Effective network security manages access to the network by targeting threats and stopping them from entering or spreading on the network. An organization needs to protect its network to deliver the services that customers and employees demand. Network security also helps enterprises to protect exclusive information from attack. The DDI solutions guard from various DNS-based attacks, malicious activity, and data exfiltration

Virtualization is the capability to run several operating systems on a single physical system and share the core hardware resources. It is used to improve IT throughput and costs by using physical resources as a base from which virtual resources can be allocated. Today the cloud is a proven delivery model, with a growing number of organizations realizing dexterity and competence. Cloud computing takes virtualization one step further by reducing costs of owning the hardware and only installing required operating systems according to client’s requirements. Implementing virtualization by cloud computing requires secure network interface, DHCP and DNS automation, secure secondary storage, secure run-time environment, and robust IPAM.

Enterprises are looking at moving from a technology centric model to a business service model to drive innovation and business dexterity. Data center transformation plays a key role in empowering this strategic shift and in helping organizations accomplish required business results. Data center transformation helps in converting IT infrastructure silos into shared, virtualized platforms of IT resources with a combined infrastructure of network servers, storage, and networking hardware.

Many organizations implement network automation competencies in their software and hardware. Network automation means to perform network-related tasks automatically without any manual intervention. It starts with basic script-level automation and progresses to intelligent network control and at its peak it is able to translate network requirements into actions with the help of data patterns. As devices and applications multiply throughout the network, it becomes difficult to use resources efficiently. IT teams struggle to control configurations, rogue devices, compliance, inspections, and to monitor other activities. The network automation integrates dynamic intelligence and management through core network services such as DNS, DHCP, and IPAM (DDI).

Others (transition to IPV6)

The transition to IPv6 is gradually increasing. Virtualization, next-generation data center, and the IoT are unlocking unique values for the enterprises. As per data published by Cisco in 2016, around 90% of the smartphones and tablets are projected to be IPv6 capable by 2020. While according to World IPv6 Launch Organization, worldwide mobile and fixed network operators observed notable IPv6 traffic as in 2016. IPv6 will also reduce the need for complicated network configurations associated with insufficient addressing due to IPv4.