Femtocell market has grown from a test product to a mainstream market within a short time-span, especially after 2007, when network operators first adopted femtocell equipment. Developed economies such as Western Europe, Japan, and Korea where broadband and mobile penetration is very high are the preferred markets for femtocell vendors in terms of higher revenues and increased market growth. This is due to ease on the part of femtoocell equipment to deploy at places where broadband facility is already available.

Femtocell offers significant benefits to both network operators and end users. The benefits for operators include cost saving for backhauling and reduced churn of subscribers as use of femtocell enables a better network coverage while subscribers enjoy benefits of reduced call charges and better experience of mobile internet applications such as video downloads and games on mobile internet. Network operators are also looking at integrating femtocells into consumer entertainment hardware such as set-top boxes and routers.

While femtocell has its advantages, high cost of the equipment is a major concern. However, several players are looking to enter the femtocell market (especially from Taiwan and Korea) and therefore it is expected that the price of femtocell equipment will come down to $100 in couple of years from the current $250 a unit.

The major factors driving the growth of the global femtocell market are the increasing indoor use of mobile phones, and the impending saturation of the telecommunications market in developed economies. The ability of femtocell to overcome the issues involved with mobile network services are also expected to drive market growth.

This report aims to analyze global femtocell equipment market according to technologies and applications, providing the market estimates and forecasts for these segments in all major geography markets. The report categorizes the market as follows:

Each section will provide market data, market trends, and drivers and opportunities accompanying the market tables for different geographic regions. The report also draws an in-depth competitive landscape, profiling the key players and the top-selling products in the market. In addition to 29 company profiles, the report also identifies the competitive developments in the global femtocell market, including mergers and acquisitions, agreements and collaborations, and new product/technology launch.

The intended audience of this report includes:

Global femtocell market has been categorized on the basis of technology, geography, and applications. IU-H technology currently holds 70% share of the global femtocell market, as these platforms are more suitable for both existing and next-generation network services such as 3G. Femtocells generate higher average revenue per user as the OPEX (Operational Expenditure) involved is negligible in comparison with macro-cells.

Growth of the market is expected to be driven by the worldwide network operators’ interest in deployment of femtocell for their network services and large size of the mobile phones market. Market growth will also be boosted by the ability of femtocell to address increasing demand of better indoor coverage and high speed data transfer for applications such as mobile video call and music downloads. Femtocell also enables service providers to offer lower tariffs for mobile calls and other value-added services. 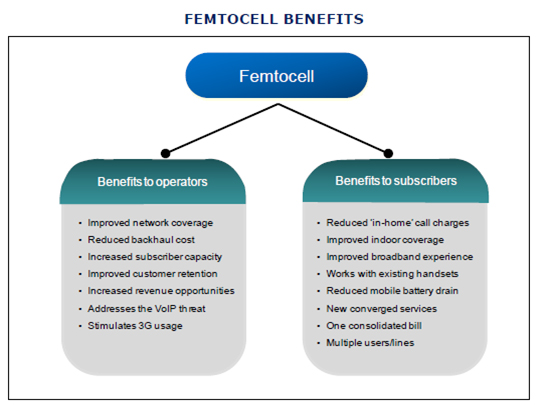 Integrating femtocell solutions with the other network equipment such as set-top boxes forms the major competitive strategy. The early movers in the industry will benefit in terms of market share if they focus on the development of efficient, user-friendly, and competitively priced products. Companies will thus need to make extensive R&D investments to make an impact on the market.