The global genetic toxicology testing market is projected to reach USD 2.0 billion by 2025, at a CAGR of 10.2%. Growth in this market is primarily driven by increased pharmaceutical research activities, opposition to animal testing, and R&D on early toxicity detection.

The increasing focus on drug discovery and personalized medicine using in vitro methods, and the rising demand for humanized animal models, are expected to offer significant growth opportunities for the players operating in the global genetic toxicology testing market. On the other hand, the failure to establish the intricacies of in vivo conditions, lack of in vitro models to study complex endpoints, and the reluctance of regulatory authorities to consider alternative methods for proving safety and efficacy are expected to restrain the growth of this market to a certain extent. 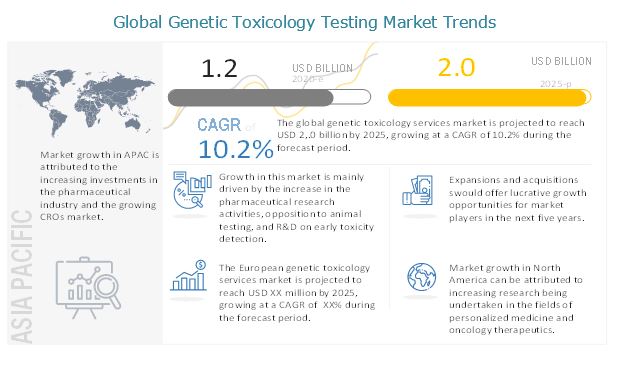 The primary goal of R&D activities is to increase the overall chances of approval of Phase I drug candidates by increasing the acceptance of compounds in the preclinical stages. To achieve this, intensive R&D activities are conducted in the early stages of drug development. This, in turn, drives the demand for genetic toxicology services. Increased R&D investments in the initial stages of drug development are also expected to increase the use of in vivo toxicology methods before the drug reaches the expensive clinical stages. This also leads to a rise in demand for genetic toxicology services, thereby fueling the growth of the market.

Autoimmunity and immune-stimulation are important endpoints for drug development, considering the fact that half of the new drugs developed are human proteins and antibodies. Currently, these therapeutic molecules can be tested only in animal models. The evaluation of the memory response triggered inside a body post a secondary infection is not allowed by in vitro genetic testing methods. These methods lack the ability to evaluate the recovery response of a body with respect to acute versus long-term immunosuppression. They are also incapable of evaluating the toxic effects of the therapeutic molecules on lymphoid architecture, such as on lymph nodes, which could lead to defects in cellular interactions necessary for immune response. Currently, there are no effective systems that use human cells for in vitro antibody production, unlike T-dependent antibody sheep red blood cells (SRBC) in animals. Due to the lack of effective in vitro models for humans, researchers still depend on animal tests to detect autoimmunity and immune-stimulation triggered by newly developed drugs.

Humanized mice are increasingly being used as models for various biomedical research applications. In September 2017, professors at the Jackson Laboratory and the Yale University (US) received a 3-year grant worth USD 1.5 million to conduct advanced research on humanized MISTRG models for gaining biological insights into human melanoma and identifying therapeutic targets. In November 2018, the Jackson Laboratory, with the Yale University (US), received a grant worth USD 700,000 from the US-based Connecticut Bioscience Innovation Fund (CBIF). This grant aimed at supporting the collaboration among scientists to develop humanized mice models that accurately represent human responses to cancer and cancer therapies.

The requirement of identifying the actual effect of drugs on humans and studying human-specific infections, therapies, and immune responses augment the use and the development of humanized animal models, thereby aiding the growth of the genetic toxicology services market during the forecast period.

Challenges: Regulations and laws to ensure ethical use of animals in research activities

Government regulations in a number of countries require geno toxicology testing on animals as a condition for imports or sales of pesticides, industrial chemicals, drugs, medical devices, vaccines, genetically modified food, and some consumer products. Every year, millions of animals, including mice, rats, frogs, dogs, cats, rabbits, hamsters, guinea pigs, monkeys, fish, and birds, are used for drug development. This has led to the establishment of several animal ethical review committees in different countries. These committees comprise animal care committees, institutional animal care and use committees, and animal ethics committees. One such committee is People for the Ethical Treatment of Animals (PETA).

The services segment accounts for the largest share of the market, by product

Based on product, the genetic toxicology testing market is segmented into reagents & consumables, assays, and services. The services segment accounted for the larger market share in 2019. The growing R&D activities in the pharmaceutical industry, growing government investments in the field of life sciences research, and the increasing research being undertaken with integrated omics studies, which is leading to increased outsourcing of services to contract research organizations (CROs), are factors attributing to the larger share of the segment.

Based on application, the genetic toxicology testing market is segmented into the healthcare industry (pharmaceutical & biotechnology), food industry, cosmetic industry, and others (agriculture and chemical industries). The cosmetics industry segment is expected to witness the highest growth during the forecast period. The increasing use of cosmetics owing to the rising disposable incomes and their easy availability to the public has driven the industry to invest in the research of breakthrough products and develop safe products.

In 2019, North America accounted for the largest share of the genetic toxicology testing market, followed by Europe, the Asia Pacific, Latin America, and the Middle East & Africa. The large share of this market segment can be attributed to the increasing development of structure-based drug designs, growing academic and government investments in genomics and proteomics research, rising life sciences research funding, high biopharmaceutical R&D expenditure, and the emerging adoption of advanced technologies in North America. The presence of a large number of global players in this region is another key factor contributing to the large share of this market segment. 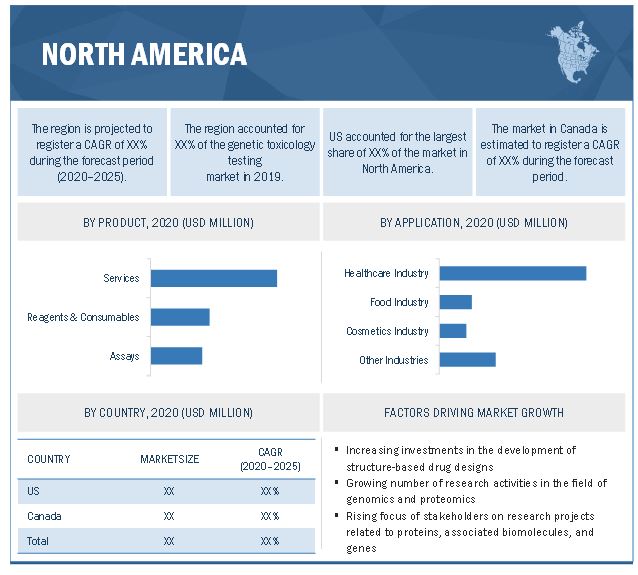 The study categorizes the Genetic Toxicology Testing Market based on product, application, regional and global level.

What is the size of Genetic Toxicology Testing Market ?

The global genetic toxicology testing market is projected to reach USD 2.0 billion by 2025, growing at a CAGR of 10.2%.

What are the major growth factors of Genetic Toxicology Testing Market ?

Growth in this market is primarily driven by increased pharmaceutical research activities, opposition to animal testing, and R&D on early toxicity detection.

Who all are the prominent players of Genetic Toxicology Testing Market ?

This study involved the extensive use of both primary and secondary sources. The research process involved the study of various factors affecting the industry to identify the segmentation types, industry trends, key players, competitive landscape, key market dynamics, and key player strategies.

This research study involved the use of comprehensive secondary sources; directories and databases such as D&B, Bloomberg Business, and Factiva; and white papers, annual reports, and company house documents. Secondary research was used to identify and collect information for this extensive, technical, market-oriented, and commercial study of the global genetic toxicology testing market. It was also used to obtain important information about the top players, market classification, and segmentation according to industry trends to the bottom-most level, geographic markets, technology perspectives, and key developments related to the market. A database of the key industry leaders was also prepared using secondary research.

In the primary research process, various sources from both the supply and demand sides were interviewed to obtain qualitative and quantitative information for this report. The primary sources from the supply side include industry experts such as CEOs, vice presidents, marketing and sales directors, manufacturing managers, and related key executives from various key companies and organizations operating in the global genetic toxicology testing market. The primary sources from the demand side include purchase and sales managers, research organizations, and pharmaceutical and biotechnology companies.

Primary research was conducted to validate the market segmentation, identify key players in the market, and gather insights on key industry trends and market dynamics.

A breakdown of the primary respondents is provided below: 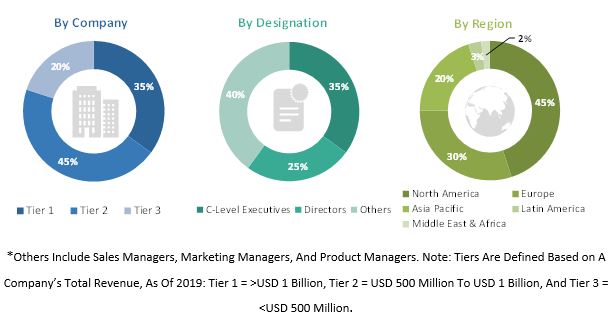 The market size estimates and forecasts provided in this study are derived through a mix of the bottom-up approach (segmental analysis of major segments) and top-down approach (assessment of utilization/adoption/penetration trends, by product, application, and region).

After arriving at the market size, the total genetic toxicology testing market was divided into several segments and subsegments. To complete the overall market engineering process and arrive at the exact statistics for all segments & subsegments, data triangulation, and market breakdown procedures were employed, wherever applicable.

The study categorizes the Genetic Toxicology Testing Market based on product, application, regional and global level.

With the given market data, MarketsandMarkets offers customizations as per your company’s specific needs. The following customization options are available for the report: