The Hybrid Vehicle Market is estimated to be 3,687 thousand units in 2017 and is projected to reach 7,593 Thousand Units by 2025, at a CAGR of 8.94% during the forecast period. The base year for the study is 2017 and the forecast period is 2018–2025. The market is primarily driven by the benefits offered by hybrid vehicles, such as better fuel efficiency, increased driving range, and low emission. Rising demand for mid- and large-sized PHEV and NGV cars, government initiatives pertaining to hybrid vehicles are likely to further boost the global market.

Market, By Degree of Hybridization

Better fuel efficiency and increasing emission norms are expected to drive the global market, demand close to 7,593 thousand units by 2025

The trend in hybrid vehicles is growing towards PHEVs and Natural Gas Vehicles (NGVs). It is seen that the demand for hybrid vehicles is either falling or growing slowly. This is possibly due to the continuous decrease in the battery price as developed nations are focusing more towards zero emission vehicles to cope with stringent emission standards.

Hybrid vehicles are more fuel efficient than gasoline and diesel vehicles. As per International Council on Clean Transportation (ICCT), hybrid systems can reduce fuel consumption and CO2 emissions by up to 35%, equivalent to more than 50% increase in fuel economy. Hybrid vehicle manufacturers such as Toyota, Audi, Hyundai, Kia, and Nissan are developing fuel-efficient hybrid cars to cope with rising emission standards to be able to sustain in the market.

The developments are also being seen in the commercial vehicle segment. OEMs are also focusing on developing hybrid commercial vehicles to cope with the stringent emission norms. For instance, Volvo developed Volvo FM truck equipped with a diesel engine and an electric motor. Volvo FM cut CO2 emissions by 15-20%. Significant growth in the freight sector would boost the demand for long haulage hybrid trucks because of the benefits they offer such as less emission and high fuel efficiency.

In North America, the market is estimated to grow gradually during the forecast period. The governments in this region are focusing on the development of zero emission vehicles. The US and Canada are expected to dominate the market in North America. 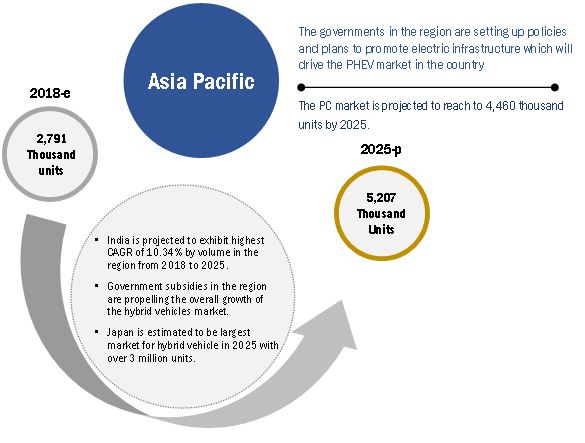 The volume of the hybrid vehicle market is estimated to be 4,169 thousand units in 2018 and is projected to reach 7,593 Thousand Units by 2025, at a CAGR of 8.94% from 2018 to 2025. The key growth drivers for the market are increasing government initiatives, higher fuel efficiency, longer driving range, stringent emission regulations and the increasing demand for mid-size and large size cars in countries such as Norway, Sweden, Germany, the US, and others.

The HEV segment, by propulsion type, is estimated to hold the largest market share in 2018. However, the PHEV segment is estimated to be the fastest growing during the forecast period because of the increasing adoption of mid- and large-sized vehicles and the development of electric infrastructure.

The full hybrid segment is estimated to hold the largest market share, by volume, for the hybrid vehicles, by the degree of hybridization, during the forecast period. But the fastest growth can be seen in the mild hybrid segment. The growth of the full hybrid segment can be attributed to the improving fuel efficiency and reduced emission due to a continuous technology upgrade. 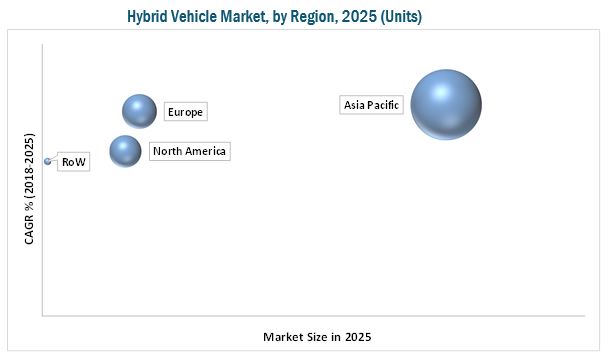 The factors restraining the growth of this market is the high demand for battery electric vehicles and the high rate of adoption of fuel cell vehicles. Also, the continuous fall in the price of battery is likely to fuel the demand for battery electric vehicles worldwide. High cost of hybrid vehicles, insufficient infrastructure, and high development cost are the challenges for the growth of this market.

The hybrid vehicle market is dominated by a few global players and comprises several regional players. Some of the key manufacturers operating in the market are Toyota (Japan), Ford (US), Volvo (Sweden), Continental (Germany), Daimler (Germany), Delphi (UK), and others.

Globally, many countries are providing various incentives and tax rebates for the purchase of HEVs, which is ultimately driving the HEV market. For instance, the UK government has announced various subsidies for the research and development of lightweight batteries. Moreover, policies such as exception from road tax, crowding charge waiver, and free car parks at various places have encouraged consumers to choose hybrid vehicles. In Asia Pacific, the adoption of HEVs is increasing. China, India, and Japan are investing a huge amount of money to encourage the adoption HEVs. For example, schemes like National Electric Mobility Mission Plan, 2013 (NEMMP) are adapted to drive the hybrid vehicles market in India.

The sales of PHEV vehicles are lower than the sales of other eco-friendly vehicles such HEV and BEV. A major measure that can boost the sales of PHEV is increasing the number of charging infrastructure across all the regions. Governments of different countries, as well as the automotive OEMs, are taking active steps to increase the number of charging stations. For instance, according to the US Department of Energy, there were more than 14,300 charging stations in the US in 2017. The Department of Energy has taken the initiatives to increase the number charging stations by providing a loan of USD 4.5 billion. European region has the highest number of charging stations than other regions. Governments are also proving subsidies for the purchase of PHEV vehicles. For example, the French government has announced to provide subsidies of Euro 1,000 for the purchase of PHEV vehicles. OEMs are also focusing more on the production of eco-friendly vehicles, which ultimately increases the number of eco-friendly vehicles sold.

NGV vehicles run on CNG and LNG. In a NGV vehicle, energy is released by the combustion of methane gas with Oxygen. NG vehicle emits less CO2 than diesel- and gasoline-powered vehicles do. CNG produces 20–30% lesser greenhouse gas emissions and 95% lesser tailpipe emissions than gasoline powered vehicles do.  Increased number of NG stations and low NG fuel price would drive the market of NGVs. Lower price of NG is the major driving factor of the increasing demand for NG vehicles. Additionally, government in Asian countries such as China, India, and others are adopting NG buses for public transit owing to its low emission. Hence lower price of NG and government adoption of NG-powered vehicles in Asia Pacific has are expected to drive the market growth during the forecast period.