The global LTE market is expected to grow from $2.28 billion in 2010 to $262.05 billion in 2015. This represents a CAGR of 158.2% from 2010 to 2015. Saturation in the existing 3G networks, the quest for higher data rates and the need for spectral efficiency have been prominent factors, triggering the demand for global LTE deployments. North America is the fastest growing market in terms of LTE infrastructure setup; whereas EMEA faces certain government-related issues with regards to spectrum auctions. Asia-Pacific, Japan, and Latin America are the fastest growing regions.

Ericsson and Nokia Siemens Networks are organizations imposing huge challenges to the other market players in the LTE market, as they have a deep penetration in the LTE infrastructure, as well as LTE end user market. Owing to their widespread reach in both these segments, these firms have a deep understanding of the technology and the complexities involved, thereby eyeing economies of scale, without compromising on the enhanced spectral efficiency.

The LTE market has wide scope in terms of operability as it is capable of operating in both TDD and the FDD modes, thereby giving flexibility to the operators. With innovations such as network sharing and hybrid networks budding in the market of late, LTE players have immense opportunity which still remains untapped.

One of the most important fact remains that the network operators will require new spectrum for LTE as they will not cease the operation of their existing 2G and 3G systems. The currently available devices work either on 2G or 3G networks however are not compatible with 4G technology. Essential criteria for accessing LTE network is that the devices must support available frequencies, interface features like MIMO and compatible modulation as well as coding scheme. At the same time, the devices must have a backward compatibility with the existing 3G networks. Thus converting 3G compatible devices to 4G compatible ones will be expensive as well as the initial LTE devices cost will be high, thereby making it difficult to achieve the necessary economies of scale. This remains to be an open ended question in the market as prominent vendors struggle to find the answer.

WiMAX and LTE are currently available fourth generation communication standards. Both WiMAX and LTE provide high downlink and uplink speeds than any other wireless networks available currently. The standards differ in deployment and integration features however differ less in functionality. WiMAX is associated with IEEE and LTE is with 3GPP. Network infrastructure upgrading is easier for LTE as compared to WiMAX however; IEEE standards are more open than those of 3GPP. While WiMAX is more apt for broadband purposes, LTE holds immense potential in the cellular market.

This research report segments the global LTE market on the basis of infrastructure, end-user devices, and services. It is further sub-segmented in terms of regions and revenues, giving insights of market trends and applications in each sub segment.

On the basis of market segments:

The primary factor that drives the market is enhanced spectrum efficiency and reduced long term infrastructure cost. However, factors such as rising data traffic and emergence of new applications and devices are expected to further accelerate the LTE market. Real-time video conferencing, social networking, YouTube, and other high-bandwidth applications have further triggered the demand for more speed with enhanced user experience, giving way to the need for enhanced mobile networks. 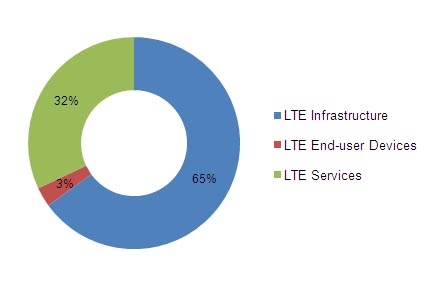