The base year considered for the study is 2017, and the forecast period is 2018–2023. The objective of the study is to provide a detailed analysis of the market on the basis of type, technology, vertical, and geography. The report also provides information regarding the major factors (drivers, restraints, opportunities, and challenges) influencing the growth of the media gateway market.

In addition, it profiles the key players in the market, and comprehensively analyzes their market ranking and core competencies. It also details the competitive landscape for market players, and describes product launches, product developments, acquisitions, partnerships, and collaborations in the market.

This research study involves the extensive use of secondary sources such as Telecommunications Industry Association (TIA), Association of Competitive Telecom Operators (ACTO), International Telecommunication Union (ITU), Cellular Operators Association of India (COAI), Association of Unified Telecom Service Providers of India (AUSPI), and databases (such as annual reports, press releases, journals, company websites, and paid databases) to identify and collect information useful for this study. The entire procedure includes the study of financial reports of the top market players. After arriving at the overall market size, the total market is split into several segments and subsegments, and the related data is confirmed with key industry experts such as CEOs, VPs, directors, and marketing executives. The following figure shows the breakdown of primaries on the basis of company type, designation, and region. 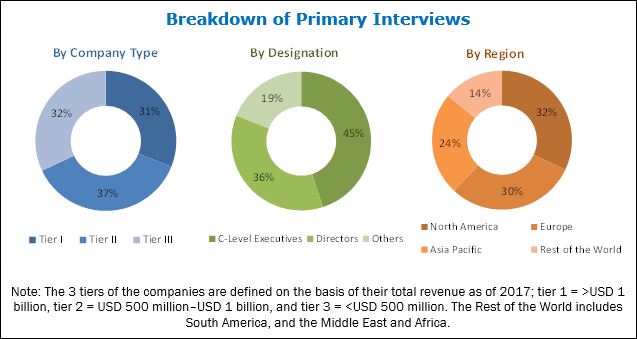 The market in this report has been segmented as follows:

Major factors driving the growth of the market include the need for high-quality communication over disparate networks; the modular structure of media gateways providing high flexibility to legacy networks; and session border functionality of integrated media gateways.

Digital media gateways hold a larger share of the overall media gateway market. These gateways convert media streams in the form of digital data telecommunications for aiding voice, video, and fax services, among others, between dissimilar interfaces using different technologies. With the increase in the need for flexible and efficient solutions for a wide variety of call-control protocols and secure SIP trunking in an established voice infrastructure, the demand for digital media gateways is also increasing.

The market for the others verticals, including hospitality, media and entertainment, education, and retail, is expected to grow at the highest CAGR between 2018 and 2023. The factors driving the media gateway market for this segment include the growing need for media transcoding for next-generation networks, HD voice transcoding for high-quality communications over disparate networks, and need for flexible and low-cost transcoding devices in these verticals. 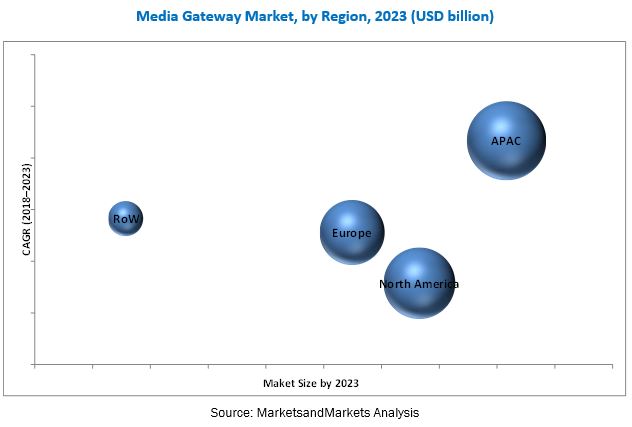 APAC is projected to account for the largest share of the global media gateway market by 2023. The countries such as Japan, India, Australia, Singapore, and China are highly dependent on the Internet and telecommunication services. The adoption of these services allows the companies to concentrate on their core business objectives. The emerging markets in this region are expected to be the largest contributors to the massive long-term growth of media gateways in the future despite the IP telephony currently being one of the effective options for connectivity in some developing countries across this region.

However, softswitches would reduce the need for the deployment of new media gateway hardware in LTE networks, and the adoption of these softwsitches over disparate networks acts as a restraint for the market growth.

These players have adopted various strategies such as product launches and developments, acquisitions, partnerships, and collaborations to grow in the media gateway market.