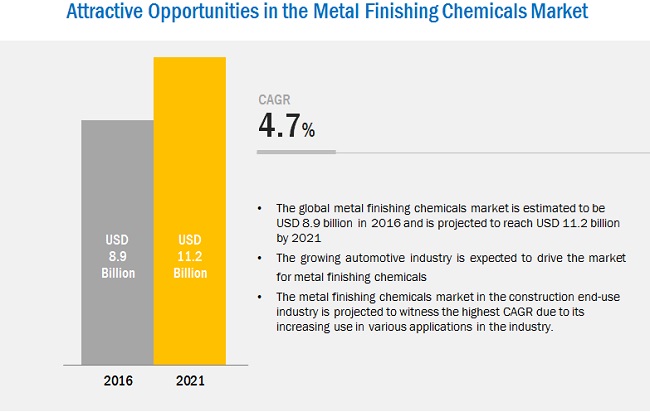 Metal finishing chemicals are used in automotive interior and exterior parts by protecting it against premature wear and corrosion. These chemicals are also used to enhance the appearance by giving the parts a smooth finish. The moisture content present in the atmosphere can cause corrosion and further can cause the damage in metal parts of the car. Therefore, to protect the metal parts of cars from corrosion, manufacturers offer innovative metal plating. In the automotive industry, metal finishing chemicals are used for plating of various components such as shock absorbers, heat sinks, gears, cylinders, brake calipers, fasteners, fluid delivery tubes, anti-vibration components, piston rings, engine valves, emblems, front grills, plated aluminum wheels, fuel injection housing, car door handles, and piston. Growing global automotive industry is further expected to drive the market for metal finishing chemicals such as aluminum, nickel, and zinc for instance in 2016, the car sales is increased by 15.0% in China, 0.2% in U.S., and in Europe it is increased by 7.0% in comparison to 2015.

Note1: Micromarkets are the subsegments of the metal finishing chemical market included in the report

Note2: Core competencies of companies are determined in terms of their key developments, SWOT analysis, and key strategies adopted by them to sustain in the market

The top-down and bottom-up both approaches have been used to estimate and validate the size of the global metal finishing chemicals market and to estimate the size of various other dependent submarkets. The research study involved the use of extensive secondary sources, directories, and databases such as Hoovers, Bloomberg, Chemical Weekly, Factiva, Commonwealth Scientific and Industrial Research Organization (CSIRO), Securities And Exchange Commission (SEC), American National Standards Institute (ANSI), Organization for Economic Co-operation and Development (OECD), and other government and private websites, to identify and collect information useful for the technical, market-oriented, and commercial study of the metal finishing chemicals market.

“This study answers several questions for the stakeholders, primarily which market segments they should  focus upon during the next two to five years to prioritize their efforts and investments”.

This research report categorizes the metal finishing chemicals market on the basis of material, type, process, end-use industry, and region.

Based on End-use Industry: 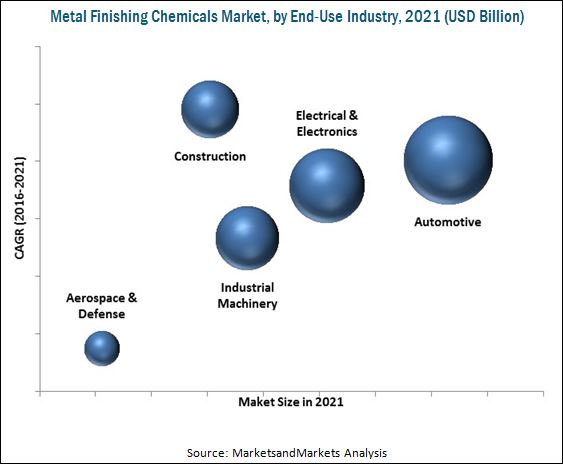 Though the metal finishing chemicals market is growing at a significant rate, a few factors such as the high price of raw materials, shift of the end-use market from developed countries to emerging countries, and the rising cost of production hinder the growth of the market, globally.

Metal finishing chemicals are majorly used in the automotive industry for better wear resistance and protection of metal components from corrosion. Electroplating and electroless plating are widely used processes for plating automotive components and finishing metal surfaces. Apart from corrosion protection, metal finishing can brighten the finish on metal or non-metal parts and even metallize plastic parts to improve durability. Metal finishing chemicals are used in various applications such as shock absorbers, heat sinks, gears, cylinders, and capacitors. Automotive components are finished using various materials such as zinc-nickel for corrosion protection, gold for enhancing appearance of exterior parts, and palladium for excellent corrosion and wear resistance.

Electronics parts and components are electroplated using processes such as electroplating and electrodeposition. The components are coated to enhance electrical conductivity, improve corrosion resistance, increase the solderability of the substrate and protect against wear. Metal finishing chemicals are used for various applications in electrical & electronics such as semiconductor, PCB, capacitors, and resistors. Gold, silver, platinum, rhodium, palladium, copper, nickel, and tin are mostly used materials for finishing electronics components.

Metal Finishing Chemicals Market
Published Date: Mar 2017 | Report Code: CH 5088
Inquiry Before Buying Request Sample
REQUEST FORM
By clicking the "Submit" button, you are agreeing to the Terms of Use and Privacy Policy.