The years considered for the study are:

This research study involves extensive usage of secondary sources, directories, and databases, such as Hoovers, Bloomberg, Businessweek, Factiva, and Avention to identify and collect information useful for technical, market-oriented, and commercial aspects of the 3D PA (polyamide) market. The research methodology used for this study can be explained as follows:

After arriving at the overall market size, the total market has been split into several segments and subsegments. The figure below shows the breakdown of primaries based on company, designation, and region conducted during the research study.

The ecosystem for 3D PA (polyamide) market consists of key suppliers of raw materials, including monomers, catalysts, and other chemical agents. Monomers such as laurolactum and undecanoic acid are the key materials which are polymerized to form PA11 and PA12. Various companies such as Arkema SA, Evonik AG, and others have a backward integrated network to meet their production demands whereas EOS GmbH (Germany), 3D Systems (U.S.), and others modify the unfilled grades into specialized ones. The demand side of polyamide market comprises healthcare, aerospace & defense, automotive, electronics, and others.

The stakeholderĺs for the report includes:

: This research report categorizes the 3D PA (polyamide) market on the basis of type, end user, and region. The report has forecast volumes and revenues as well as analyzed trends in each of the submarkets.

On the basis of Type:

On the basis of End User:

With the given market data, MarketsandMarkets offers customizations according to the companyĺs specific needs. The following customization options are available for the report:

The 3D PA (polyamide) market consisting of PA11 and PA12 is projected to reach USD 48.6 Million by 2020, at a CAGR of 26.59%, by scenario one and USD 85.1 Million, at a CAGR of 41.2% from 2015 to 2020, by scenario two. The key factors responsible for this growth is its increased usage in healthcare and aerospace & defense sectors for customized products. As the market is dependent on the commercial growth of the 3D printing technology, this report has been prepared based on two scenarios where scenario one represents normal growth and scenario two represents exponential one. These scenarios are based on certain factors such as rate of adoption by end-use industries.

The healthcare and aerospace & defense segment contributed a major share to the market owing to the increased usage of PA11 & PA12 using 3D printing technology for highly customized products such as prosthetics, aerodynamic parts using various compositions. Moreover, many automobile companies are using PA11 and PA12 for rapid prototyping as well as manufacturing of customized parts. North America and Europe are the key markets for PA11 and PA12 in 3D printing with large number of suppliers and several end user companies in healthcare and aerospace & defense. The growth of PA11 and PA12 in 3D printing is largely dependent on the growth of 3D printing technology as an alternative to conventional manufacturing practices. Laser sintering in 3D printing is an important technology with many commercial applications where PA11 and PA12 are used in powdered form.
Based on type, the PA12 segment is expected to account for the largest share of PA11 and PA12 market in 3D printing in 2015. This segment is estimated to witness high growth owing to the high supply base and increased demand of PA12 in the production of specialized parts. PA11 is a bio-based specialty polyamide. It is environment-friendly and provides better performance than conventional thermoplastics. This is expected to result in the growth of bio-based & specialty segment globally from a strategic point of view.

North America and Europe are expected to dominate the 3D PA (polyamide) market between 2015 and 2020 by both the scenarios due to high adoption rate of technologies in these regions. The growth of PA11 and PA12 market for 3D printing in North America & Europe is majorly driven by the increasing demand from healthcare and aerospace & defense. The U.S. is a major market in North America, followed by Canada and Mexico. Germany, France, and Italy are the key countries in the European 3D PA (polyamide) market. Asia-Pacific is estimated to be a potential market for 3D PA (polyamide) in future. This growth can be attributed to the presence of emerging economies such as China, India, Taiwan, and others as well as the growth in end user industries such as automotive, healthcare, and others in this region. 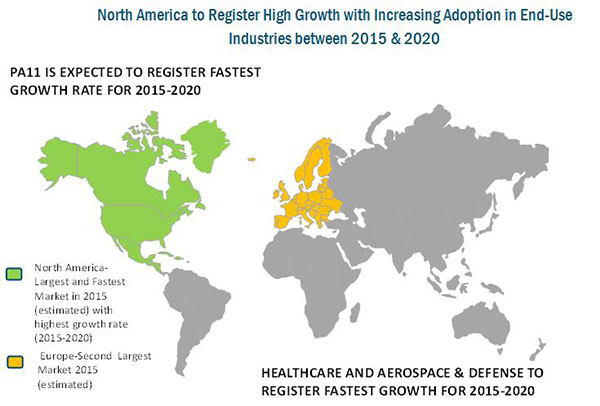 The increasing usage in healthcare and aerospace & defense sector for weight reduction is one of the key factors driving the growth of 3D PA (polyamide) market. Many grades of PA11 and PA12 can be used for medical applications. Some grades have carbon fiber additions to increase the material strength. PA12 has a greater availability due to established distribution system as compared to PA11 which is derived from castor seeds. However, companies such as Arkema SA, Evonik AG, and others, dealing primarily in specialty chemicals, have started operations in emerging markets to increase product supply in these regions. Other key companies supplying 3D PA (polyamide) materials includes EOS GmbH, 3D Systems, Stratasys, and others which have developed their own grades for 3D printing technology.

Estimating the future demand is a prime challenge for PA11 and PA12 suppliers owing to the economic slowdown that took place in the last decade. Many economies in the European region have still not recovered completely, which has affected the demand for PA11 and PA12 from major end user industries in this region. In Asia-Pacific, China witnessed lowest growth rates in the last decade. Manufacturing sector holds a key share in the GDP of China, and the slowdown in this sector will affect the PA11 and PA12 consumption as it will affect technology adoption. However, from a strategic point of view, China still holds the key to the growth of 3D PA (polyamide) market in Asia-Pacific region. 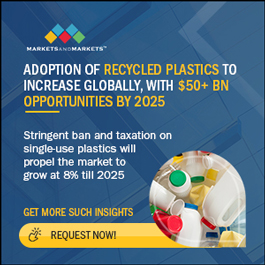 REQUEST FORM
Your personal details are safe with us. Privacy