The market has been classified by type; Locomotive, Rapid Transit, and Railroad Cars. Locomotives are traditionally used to haul freight and passenger wagons for long distance main line transport. However, vehicles such as metros, light rail vehicles, and subways are being used for intra-city as well as intercity transportation. In the diesel and electric locomotive market, the Asia-Pacific is estimated to lead the market, in terms of value, in 2015. The North America region is estimated to be the second-largest market for diesel and electric locomotives, following the increasing urbanization and need of rapid transportation

The research methodology used in the report involves various secondary sources including paid databases and directories. Experts from related industries and suppliers have been interviewed to understand the trends of investments in rolling stock market. The bottom-up approach has been used to estimate and validate the size of the global market. The market size, by volume, is derived by identifying the country-wise production volumes and analyzing the demand trends. The market size, by value, is derived by multiplying the average selling price of the rolling stock market by the number of units. Figure below shows the break-up of profile of industry experts, who participated in primary discussions

MarketsandMarkets also offers the following customizations for this market:

The global rail infrastructure market size is estimated to be at USD 45.73 Billion in 2015, which is projected to grow to USD 54.55 Billion by 2020, at a CAGR of 3.59%. Rail transportation offers an ideal, safe comfortable and environment friendly mobility solution for urban and interurban transportation systems. Increasing urbanization in emerging nations has strained the existing road, rail, and air infrastructure. This has also resulted in the development of infrastructure for connectivity of metros to the suburbs. Population growth in these regions is further driving the demand for rolling stock and supporting infrastructure such as maintenance and services. Urbanization is estimated to drive the demand for intra-city mobility solutions.

The report also segments the global rail infrastructure market by type (Railroad cars, Rapid transit and Locomotives). Locomotives are traditionally used to haul freight and passenger wagons for long distance main line transport. However, vehicles such as metros, light rail vehicles, and subways are being used for intra-city as well as intercity transportation. The growth in this market is attributed to factors such as increasing population on a global level, coupled with urbanization, increasing need for cleaner and faster modes of transportation, and economic growth is driving this market. However, reliance on government projects, insufficient infrastructure, and competition of faster modes of travel such as airways can hinder the growth of the rolling stock market

Asia-Pacific is the largest market for rolling stock, followed by North America and Europe. Growth in this market is fuelled by the increase in urbanization, high growth rate of urban population, and railway privatization in countries like China and Japan

The global rail infrastructure market report gives a detailed study regarding railway track networks by region as well as investment on development of new railway track network by country. The Asia-Pacific has the highest potential in terms of infrastructure investment for new rail track development. This growth is propelled by rise in need of transportation in urban regions and increasing production of automobiles, which has resulted in traffic congestion. This in turn has boosted the rolling stock market 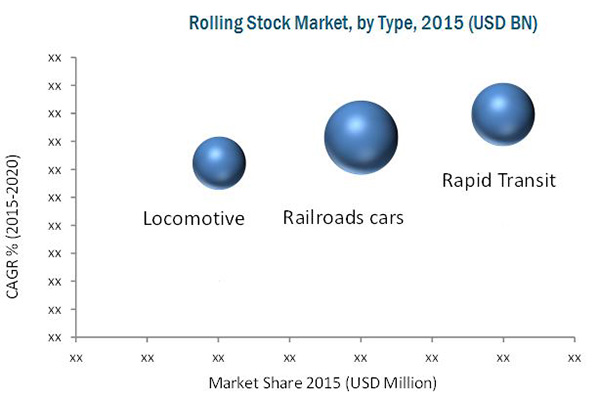 The global rail infrastructure market is highly capital-intensive and require a high degree of support from the government. There is a growing demand for public transport in metropolitan regions. Government bodies are expected to invest heavily in developing support infrastructure and improving existing infrastructure to accommodate this demand.

However, if the capital requirement for a particular project is too high, it could discourage investments and act as a restraint. The return on investment (ROI) period is also long and may hinder the growth of capital-intensive projects or technologies.

The CSR Corporation has a strong presence and manufacturing capabilities in its domestic market, which will help it in product development and revenue generation owing to infrastructure development in China. The merger with CNR Corp. will further enhance these capabilities. It will also ensure that domestic competition will not act as a hindrance to overseas supply orders. The company is attempting to expand in overseas markets which are witnessing an increase in investments for infrastructural development.

Bombardier Transportation has a wide product portfolio that is able to meet both, intercity and intracity transportation needs. This helps the company to supply application-specific transit solutions for cities based on existing infrastructure. The rising demand for passenger rail in emerging nations and additional services in developed nations will also present new opportunities for the Germany-based company. The company has secured supply contracts for its products which will help to maintain a balanced revenue stream; however, the changing economic scenario in Europe may affect future orders, as the majority of the company’s revenue is derived from this region.