Objectives of the study:

Top-down and bottom-up approaches have been used to estimate and validate the size of the market and various other dependent submarkets in the overall Southeast Asia waterproofing systems market. The research study involves extensive use of secondary sources, directories, and databases such as Hoovers, Bloomberg, Chemical Weekly, Factiva, ICIS, Securities and Exchange Commission (SEC), as well as government and private websites to identify and collect information useful for the technical, market-oriented, and commercial study of the Southeast Asia waterproofing systems market.

“This study answers several questions for various market players across the value chain, primarily which market segments to focus in the next two to five years for prioritizing the efforts and investments.”

On the basis of Preformed Membranes:

On the basis of Liquid Applied Membranes

On the basis of Integral Systems:

On the basis of waterproofing Chemicals:

On the basis of Countries:

With the given market data, MarketsandMarkets offers customizations according to the specific needs of the company. The following customization options are available for the report:

The market size of Southeast Asia waterproofing systems market is estimated to reach USD 5.35 Billion by 2021, at a CAGR of 14.52% during the forecast period. The rising demand for waterproofing is backed by the growing building & construction industry in the region, especially in the developing countries, such as Indonesia, Malaysia, Thailand, Singapore, and Vietnam. Rapid growth in the construction industry made it the largest contributor to the market in Southeast Asia in 2015.

Modified bitumen is the most extensively used preformed membrane and has the largest market size. It is composed of single ply and built-up roofing. These membranes offer various advantages, including excellent performance at cold temperature and handling characteristics, high fatigue (cycling) resistance, elasticity, and strength.

Liquid applied membranes such as elastomeric, bituminous, and cementitious are commonly used in the building & construction industry for various applications, including roofing, walls, floors, basements, interior & exterior surface protection, and so on. Elastomeric membranes is expected to be the fastest-growing segment in liquid applied membranes during the forecast period due to excellent throughput with high liquid flow rates at low differential pressures, ensuring robust performance even in the most extreme applications.

Crystalline waterproofing admixture is expected to dominate the integral systems waterproofing market in Southeast Asia owing to its fine properties, which help in improving the quality and age of concrete structures. These admixtures exhibit properties that help in reducing absorption and water permeability by acting on the capillary structure of concrete made of cement. 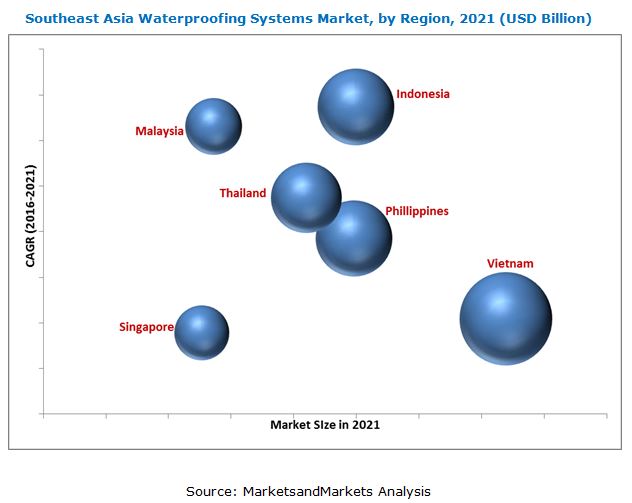 Carlisle companies Inc. (U.S.) company is one of the major manufacturers of waterproofing & roofing systems, which competes with its competitors in terms of pricing, innovative products, long-term warranties, and customer care services. It also focuses on product innovation as a part of its major strategy to increase its global presence. The company adopts acquisitions and expansions as the key business strategies to increase its revenues.