[113 Pages Report] The space mining market was valued at USD 0.49 billion in 2017 and is expected to reach USD 2.84 billion by 2025, at a CAGR of 23.6% during the forecast period. The base year considered for the study is 2017, and the forecast period considered is from 2018 to 2025. The objective of the report is to provide a detailed analysis of the market based on phase, type of asteroid, and region. The report also includes qualitative information on different types of commodity resources available in space, categorization of asteroids based on their distance from earth, applications of space mining, and space and on-earth utilization of space-mined materials. The report forecasts the market, in terms of value, for various segments with regard to geographies, namely,  the US, Europe, and Japan. It strategically profiles the key players and comprehensively analyzes their ranking and core competencies in the market, along with detailing the competitive landscape for these market leaders.

The research methodology used to estimate and forecast the space mining market begins with capturing data of various missions to asteroids and analyzing the mission cost for various phases in which the market has been derived. Secondary sources used for this research study include government sources (such as space agency, annual presentations, investor presentations, financial statements, journals, industry news), associations (B612 foundation, JPL (NASA), asterank). After arriving at the overall market size, the total market has been split into several segments and subsegments, which have been verified through primary research by conducting extensive interviews with various experts, such as CEOs, VPs, directors, and executives. The data triangulation and market breakdown procedures have been employed to complete the overall market engineering process and arrive at the exact statistics for all segments and subsegments. The breakdown of the profiles of primary respondents has been depicted in the below figure. 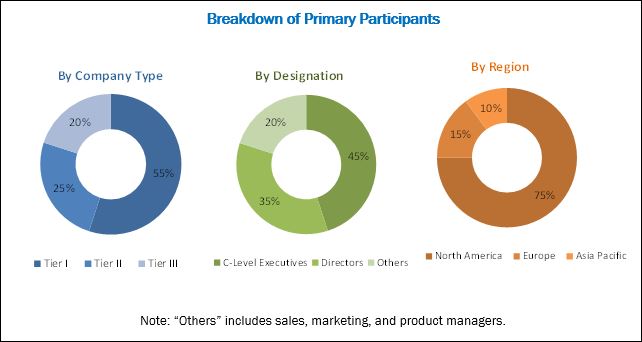 “This study answers several questions for stakeholders, primarily the market segments to focus on in the next 2–5 years for prioritizing efforts and investments.”

This report categorizes the space mining market on the basis of phase, type of asteroids, and geography.

Categorization of Asteroids Based on Their Distance from Earth

With the given market data, MarketsandMarkets offers customizations according to the company’s specific needs. The following customization options are available.

The space mining market is estimated to grow from USD 0.65 billion in 2018 to USD 2.84 billion by 2025, at a CAGR of 23.6%. The growth of this market can be attributed to the ongoing and impending space mining missions, increasing investments by private stakeholders in asteroid mining companies, and rising government initiatives to frame regulations with respect to asteroid mining.

This report segments the space mining market on the basis of phase, type of asteroid, and geography. Additionally, qualitative information regarding different types of commodity resources available in space, categorization of asteroids based on their distance from earth, applications of space mining, and space and on-earth utilization of space-mined materials has been provided in this report. Based on phase, the space mining market has been segmented into spacecraft design, launch, and operation. The spacecraft design segment is expected to hold the largest market share during the forecast period. A spacecraft is a vehicle machine designed to fly in outer space. It is used for various purposes, such as communications, earth observation, meteorology, navigation, space colonization, planetary exploration, and transportation of humans and cargo. Depending on the mission type, the overall spacecraft is designed, consisting of various devices, such as instruments (such as radiometers, spectrometers, thermal emission and reflection systems, cameras, magnetometers, and multispectral scanners), altitude control systems, and electric power systems. The design of the spacecraft has vital importance as the spacecraft has to sustain in critical or extreme conditions in space, such as microgravity.

C-type asteroids are expected to hold the largest share of the space mining market during 2018–2025. Many missions have been targeted toward C-type asteroids; this is mainly because these asteroids contain ice water, which can be mined and used as rocket propellant. Carrying water from Earth to space increases the overall weight of the spacecraft, which ultimately increases the overall launching cost. Asteroid containing water can be detected with various technologies, and this water can be converted into liquid hydrogen and liquid oxygen; in this form, it is the most powerful chemical rocket propellant. 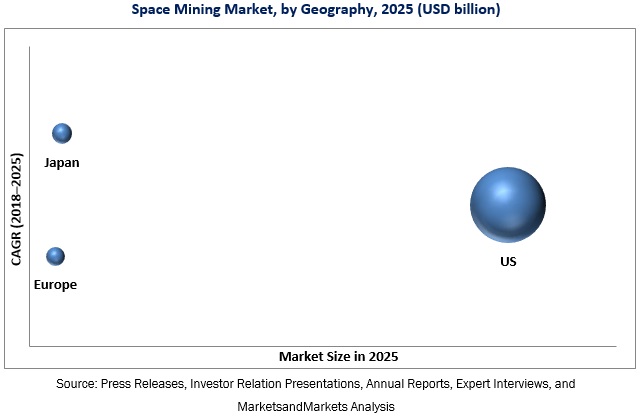 The US is expected to grow at the highest CAGR in the space mining market during the forecast period. This is mainly due to the upcoming space exploration and mining missions by NASA and private players in this country, such as Deep Space Industries and Planetary Resources, increasing investments by private players in asteroid mining companies, and growing number of government initiatives to boost space exploration activities. The US government pursues space activities in a number of areas. The US government updated US commercial space legislation with the passage of the Spurring Private Aerospace Competitiveness and Entrepreneurship (SPACE) Act of 2015 (also known as Commercial Space Launch Competitiveness Act) in November 2015. This law explicitly allows US citizens to engage in commercial exploration and exploitation of space resources, such as water and minerals. The SPACE law was based on the proposed Asteroids Act in 2014, which emphasizes on the commercialization of space resources.

*Details on Business Overview, Product Portfolio, Objectives, Recent Developments, and MnM View Might Not Be Captured in Case of Unlisted Companies.

Hello, I'm writer and TV director and I'm currently writing a scientific documentary film about space mining for a French tv channel. I'm interested to look at your report. Can you send me the sample brochure ?

I am a bachelor student of economics and I am trying to write a paper about the market for space mining and would greatly appreciate access to this research in order to reference it in my paper. Thank you most kindly in advance.

As chemists, we have developed a key fuel to sustainably return men and commodities from off-world. Our only requirement is that the destination contains enough of the resources we need (no, not water or ice). What are the materials that you have considered in space mining?