The objectives of the report are to define, describe, and forecast the telecom API market size on the basis of type of APIs, user types, and regions; provide detailed information regarding key factors influencing the market growth (drivers, restraints, opportunities, and challenges);  track and analyze the market scenario on the basis of technological developments, product launches, and mergers & acquisitions; and forecast the market size of market segments with respect to five main regions, namely, North America, Europe, Asia-Pacific (APAC), Middle East and Africa (MEA), and Latin America.

This research study involves extensive usage of secondary sources, directories, and databases (such as Hoovers, Bloomberg, Businessweek, Factiva, and OneSource) to identify and collect information useful for this technical, market-oriented, and commercial aspect of the telecom API market size.

The research methodology used to estimate and forecast the market begins with capturing data on key vendor revenues through secondary research. The vendor offerings are also taken into consideration to determine the market segmentation. The bottom-up procedure is employed to arrive at the overall market size of the global market from the revenue of the key players in the market. After arriving at the overall market size, the total market is split into several segments and sub segments, which are then verified through primary research by conducting extensive interviews with key people, such as CEOs, VPs, directors, and executives. The data triangulation and market breakdown procedures are employed to complete the overall market engineering process and arrive at the exact statistics for all segments. The breakdown of primary profiles is depicted in the below figure:

The figure below shows the breakdown of primaries on the basis of company, designation, and region, conducted during the research study. 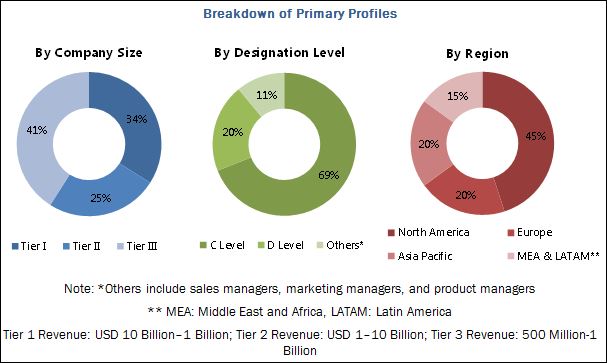 The telecom API market report is broadly segmented into the following types of APIs, user types, and regions.

By Type of API

With the given market data, MarketsandMarkets offers customizations based on company-specific needs. The following customization options are available for the report:

Rising demand for advanced telecom services over the internet to drive the global Telecom API market to USD 231.86 billion by 2021

An API is a set of commands, functions, protocols, and objects the developers use to create a software or to interact with an external application or system. It serves as an interface between different software programs and facilitates their interaction. For instance, the Windows API provides developers with user interface controls and elements such as Windows, scroll bars, and dialog boxes. Telecom APIs allow carriers to pass valuable data to third parties, which they monetize on an asymmetric basis, as typically mobile network operators do not provide services to the end-users. Telecom APIs are a means of accessing telecom services and data for a variety of communication enabled applications.

Increasing adoption of M2M devices among end-users, improving telecom API user experience, and monetization of telecom operator services will fueled the growth of telecom API market. Integrating an application with a telecom service required developers to understand and use telecom or VoIP protocols such as SS7 and SIP. As the VoIP market reached its maturity, several companies launched the telecom API allowing the software applications to interface with telecom services such as voice and SMS. Communication Service Providers (CSPs) face challenges regarding commoditization of their services. With the emergence of IP based communication, the Over-The-Top (OTT) providers such as Skype, Vonage, and Netflix provide offerings that ride on top of the telecom operator networks with no intention of owning the network

In emerging economies, mobile operators are the main enablers of the digital economy. Telecom operator APIs are a powerful channel for unlocking creativity and boosting the startup ecosystem. The set of APIs offered by the operators creates a powerful cycle of innovation as startups have the ability and scope to combine several APIs to create new services. A startup offering SMS-based localized content to its users depending on their city would leverage three operator APIs simultaneously: SMS, location, and direct operator billing. Thus, startups and developers in emerging markets building mobile services using operator APIs are a major opportunity in the global telecom API market. 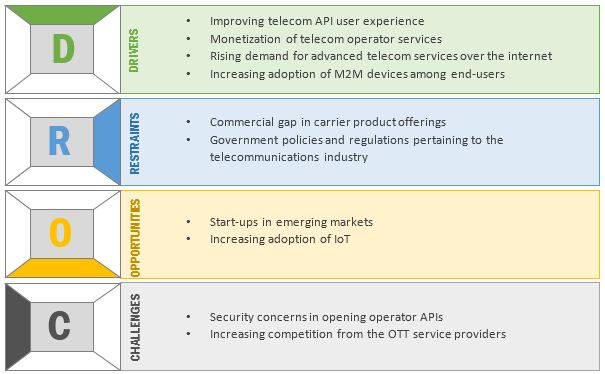 MarketsandMarkets forecasts the telecom Application Programming Interface (API) market to grow from USD 93.69 Billion in 2016 to USD 231.86 Billion by 2021, at a Compound Annual Growth Rate (CAGR) of 19.87%. Improving telecom API user experience, monetization of telecom operator services, rising demand for advanced telecom services over the internet and increasing adoption of Machine-to-Machine (M2M) devices among end-users are some of the major driving factors of the telecom API market.

The objectives of the report are to define, describe, and forecast the market size on the basis of types of APIs, user types, and regions. Based on the types of API, the location API is the fastest growing market that helps in driving the market during the forecast period. The booming interest in location-based services spanning the verticals is driving the growth of this segment and the rising significance of providing more contextual experience to the customers using mobile devices is driving the location API segment.

The Short Message Service (SMS), Multimedia Messaging Service (MMS), & Rich Communication Service (RCS) API has the largest market share in the telecom API market during the forecast period. Its market share is expected to grow because of the increasing need for monetizing telecom carrier services and the demand for improving mobile app developer experience. Interactive Voice Response (IVR)/voice store and voice control API has the second largest market share during the forecast period due to the increasing adoption of M2M devices among end-users. 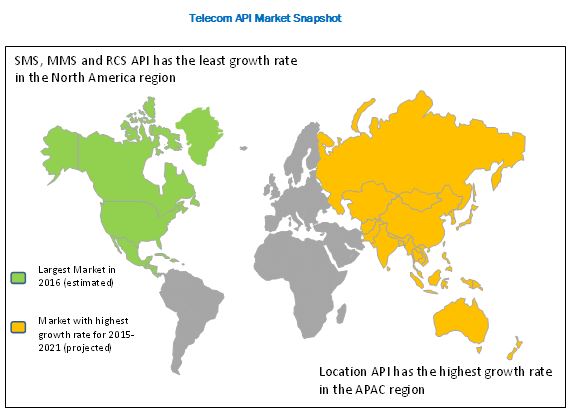 North America is expected to hold the largest market share in 2016 and APAC is projected to grow at the highest rate in the telecom API market during the forecast period. Increase in use of smartphones and mobile applications has resulted in the wide adoption of API related technologies in this region. The increasing innovative developments in technologies are benefiting all the stakeholders present in the market.

However, commercial gap in carrier product offerings & the developer needs and government policies & regulations pertaining to the telecommunications industry are the restraining factors for the market.

The growth of market is depending on the factors, such as improving telecom API user experience, monetization of telecom operator services, rising demand for advanced telecom services over the internet, and increasing adoption of M2M devices among end-users.

Apart from established players in the industry, the new entrants in the market are introducing new telecom APIs 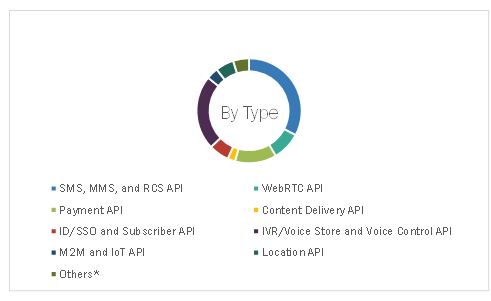 Smart IVRs empower the enterprises by enhancing their sales and marketing initiatives. For instance, call centers can process millions of calls per hour to manage real-time data by using a smart IVR system. Thus, IVR or voice API enables to build high-quality applications integrated with voice calling and IVR capabilities.

Digital payments have become the mainstream for a large set of verticals, including retail, BFSI, manufacturing, education, and hospitality. The payment API segment enables innovation and new ways to approach payment transactions.

The webRTC API segment enables the applications to capture and stream audio and video media as well as exchange data in real time. Data sharing and peer-to-peer teleconferencing is enabled without requiring to install plug-ins or any other third-party software.

SSO helps the users to authenticate from one application and automatically be logged into another one. The SSO API when integrated with an app gives the users seamless access to the app without re authenticating.

The location API segment facilitates adding location awareness to the applications with features, such as automated location tracking, geofencing, and activity recognition.

The IoT trend that links all the devices in real time can be driven and empowered by a robust telecom API strategy. For IoT to be useful, the devices that make up this mesh must be connected to the cloud, which can be achieved via APIs. Cloud-based services are the way in which the IoT is connected to the data. Telecom APIs serve as the bridge between IoT on one side and useful information- & data-capturing capabilities on the other.