Global Wave Energy Market is expected to grow at a CAGR of 19.3 %

Eco Wave Power (Israel): Eco Wave Power is one of the key companies in the field of ocean-based renewable energy. The company focusses on conceptualizing and planning new and competitive wave energy technologies. It has developed proprietary technology for producing electrical energy from the ocean and sea waves.

Carnegie Clean Energy (Australia): Carnegie Clean Energy is one of the leading wave energy technology and solar/battery microgrid project developers. The company emphasizes on Engineering Procurement and Construction (EPC) and Energy Made Clean (EMC) for battery/solar based microgrids to islands and remote and fringe-of-grid communities. It also offers renewable energy generation products having a combination of wave, solar, wind, storage, and desalination.

NEMOS (Germany): NEMOS is one of the key technology leaders in the field of wave energy and related ocean engineering topics. NEMOS focusses on designing, engineering, and R&D of wave energy converters and operates through three business segments, namely wave energy, engineering, and test facilities. NEMOS Wave Energy Converter offered by the company is based on oscillating body technology. NEMOS WEC comes integrated with multiple solar modules in-order to enhance its power generation capability. The company uses composite spring for transmitting the energy absorbed by the floating body to a belt drive.

OceanEnergy (Ireland): OceanEnergy is a major player offering innovative renewable energy in the wave energy industry. The company focusses on providing clean and sustainable energy to its customers. It offers products that are used in the market for various applications, including making carbon-free islands, connected oceans, food & fuel production, and utility scale power. The company works closely with technology development partners such as Vigor, Tritec Marine, Siemens, Hydro Group Systems, and Prolucid.

Wave Swell (Australia): Wave Swell is a renewable energy technology development company that works to convert the energy in ocean waves into clean and emission-free electricity. It offers wave energy converters under the brand name Uniwave, which are based on the oscillating water column principle. These WECs can only be used for power generation applications. The wave energy converter provided by this company has a unique design wherein the oscillating water column is an artificial blowhole consisting of a chamber that is open underneath the waterline.

AWS Ocean Energy (UK): AWS Ocean Energy is a provider of marine energy technology. The company is working in the direction of designing (creating), commercializing, and delivering renewable technologies and related services to the marine energy sector. It mainly emphasizes on improving its WECs through R&D, engineering, and commercial expertise. The company is also developing new technologies for both the wave and tidal sectors.

CorPower Ocean (Sweden): CorPower Ocean develops and offers renewable energy generation solutions, including compact Wave Energy Converters. CorPower Ocean has received funds from organizations such as InnoEnergy, the European Commission, the Swedish and Scottish Governments as well as private investors. The end users and partners of the company for their wave energy converters predominantly include Iberdrola, EDP, and Simply Blue Energy.

Oscillating Water Column: Wave energy converters that operate on the oscillating water column principle often have a large construction for tapping a greater potential. These wave energy converters have a limited number of parts wherein the major parts include a column and a turbine attached to a base. This base can either be a floating platform or could be held by an onshore structure such as shoreline or sea shore rocks. In most of the cases, the column is a hollow structure which is open from underneath and is partially filled with water.

Oscillating Body Converter: Wave energy converters operating on the principle of oscillating body technology have a complex construction when compared with the other two technologies, with the most prominent part being the wave energy absorbing structure. Oscillating body converters are mainly used for power generation applications. However, these converters can also be used for desalination of sea water. The pressure created in the system due to the absorbed wave energy can be used to operate pressurized desalination processes. Further, the electrical energy generated by the device can be easily used for pumping the desalinated water to the shore, simplifying the overall process.

Overtopping Converters: Overtopping wave energy converters have a simpler construction compared with oscillating water column and oscillating body type of wave energy converters. The principle of operation, as well as the construction of these converters, is similar to that of river-based dams. The structure is made up of a reservoir, and usually, a turbine is placed underneath this reservoir.

Near Shore: Wave energy converters that are installed at a distance ranging from a few hundred meters up to 3 kilometers from the coast or shore line fall under this segment. WECs based on oscillating body principle are mostly installed at these locations, enabling them to work efficiently in a relatively controlled environment than offshore installations. Near shore installations are done for multiple applications such as power generation, desalination, and environmental protection.

Offshore: Wave energy converters that are installed at a distance of 3 kilometers or more from the coast or shoreline are considered under this segment. According to IRENA, WEC installation in depths of more than 25 meters of water can also be termed as offshore installations. The disadvantage of this type of installations is the high cost of supporting infrastructure such as under water cables and others that ultimately raise the Capex of the project if the project is connected to the grid.

Desalination: Desalination is needed to make sea (salinated) water fit for human consumption and irrigation purposes. Wave energy converters are placed amidst ocean water, easing the process of collecting salinated water as well as generating the required power for desalination. The absorbed energy can easily be used to transfer the pressure on the collected water to pass it through a membrane, completing the process of desalination. In addition, the generated power can also be used for operating the pumps that can transfer this power from the WEC to the shore.

Power Generation: Wave energy converters can be used to convert the kinetic energy of waves into electrical energy. This harvested energy can be utilized by the coastal population. In addition, offshore structures, including oil & gas platforms and environmental agency bases, can be fed with the electricity produced by these WECs to reduce their dependence on conventional diesel as well as gas-based power generators, also helping in reduction of carbon emissions.

Environmental Protection: When these waves hit the shore with all that potential, they tend to damage the shore line and the aquatic entities within the periphery and wash them ashore or inside the sea. Additionally, during high tide, the waves penetrate deeper on-shore, covering more area and further disturbing the human as well as aquatic life. Wave energy converters, especially the ones operating on the principle of oscillating water column, cover a large area. An array or chain of these devices can be used proficiently to reduce the impact with which waves hit the shoreline, reducing coastal erosion. Moreover, the installation of an array or chain of these WECs helps in grid scale production, helping utilities in meeting the needs of power by the coastal population. 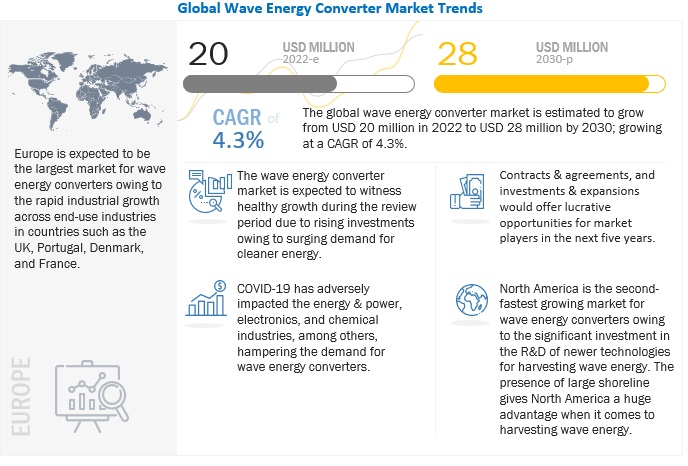 The near shore segment is expected to be the largest and fastest-growing segment in the wave energy market, by location, during the forecast period 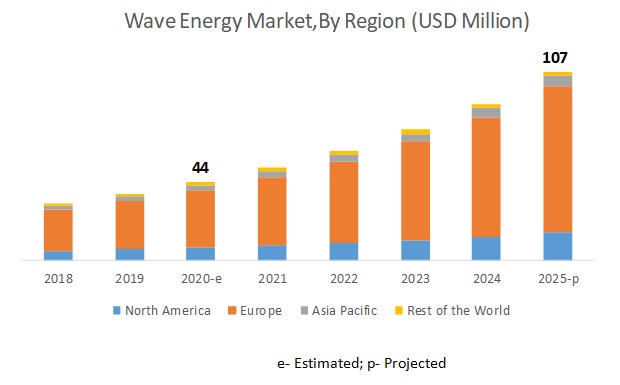 In this report, the wave energy market has been analyzed with respect to four regions, namely, Asia Pacific, North America, Europe, and Rest of the World.

Europe is both largest and the fastest-growing wave energy market, followed by North America and Asia Pacific. It is expected in Euope that there will be maximum adoption and implementation of wave energy conversion devices owing to the presence of a large number of companies working in the research and development of wave energy converters. Major countries in this region include Germany, the UK, Spain, the Nordic Countries, and Rest of Europe. Rest of Europe includes Ireland and Italy. The European region experiences cold ambient temperatures throughout the year simultaneously having high buying power. Both these factors lead to an increased demand for power, ultimately increasing the demand. To reduce carbon emissions from power generation activities, the countries are emphasizing on renewable technologies for power generation.

Eco Wave Power is one of the key companies in the field of ocean-based renewable energy. The company focusses on conceptualizing and planning new and competitive wave energy technologies. It has developed proprietary technology for producing electrical energy from the ocean and sea waves. Such technology enables this company to deliver effective, sustainable, and affordable wave energy solutions.

Carnegie Clean Energy is one of the leading wave energy technology and solar/battery microgrid project developers. The company emphasizes on Engineering Procurement and Construction (EPC) and Energy Made Clean (EMC) for battery/solar based microgrids to islands and remote and fringe-of-grid communities. It also offers renewable energy generation products having a combination of wave, solar, wind, storage, and desalination.

7 WAVE ENERGY MARKET, BY LOCATION (Page No. - 44)
7.1 INTRODUCTION
7.2 ONSHORE
7.2.1 ECONOMIC INSTALLATION AND INCREASING DEMAND FOR POWER FROM COASTAL POPULATION ARE DRIVING ONSHORE WEC MARKET
7.3 NEAR SHORE
7.3.1 WEC INSTALLATION FOR KEY APPLICATIONS IS A MAJOR DRIVER FOR NEAR SHORE WEC SEGMENT
7.4 OFFSHORE
7.4.1 ABILITY TO POWER OTHER OFFSHORE STRUCTURES IS EXPECTED TO DRIVE THE OFFSHORE WEC SEGMENT

This study involved four major activities in estimating the current size of the wave energy market. Exhaustive secondary research was done to collect information on the market, the peer market, and the parent market. The next step was to validate these findings, assumptions, and market sizing with industry experts across the value chain through rigorous primary research. Both top-down and bottom-up approaches were used to estimate the total market size. The market breakdown and data triangulation techniques were employed to estimate the market size of the segments and the corresponding subsegments.

The supply side is characterized by the increasing adoption of new product launches/ new projects, partnerships & collaborations, and joint ventures among leading players. Various primary sources from both the supply and demand sides of the market were interviewed to obtain qualitative and quantitative information. The breakdown of primary respondents is given below:

Both top-down and bottom-up approaches have been used to estimate and validate the size of the global wave energy market and its dependent submarkets. These methods were also used extensively to determine the size of various subsegments in the market. The research methodology used to estimate the market size includes the following:

After arriving at the overall market size-using the market size estimation processes as explained above-the market was split into several segments and subsegments. To complete the entire market engineering process and arrive at the exact statistics of each market segment and subsegment, the data triangulation, and market breakdown procedures were employed, wherever applicable. The data was triangulated by studying various factors and trends from both the demand and supply sides in the wave energy market.

With the given market data, MarketsandMarkets offers customizations as per the client’s specific needs. The following customization options are available for this report:

Wave Energy Market
Published Date: Apr 2020 | Report Code: EP 7589
Inquiry Before Buying Request Sample
REQUEST FORM
By clicking the "Submit" button, you are agreeing to the Terms of Use and Privacy Policy.