The global WiMAX Equipment market is expected to grow from $1.92 billion in 2011 to $9.21 billion in 2016. This represents a CAGR of 36.83% from 2011 to 2016. Saturation in the existing 3G networks, quest for higher data rates, and the need for spectral efficiency are the prominent factors triggering the demand for global WiMAX deployments.

The inexhaustible need for bandwidth is one of the major drivers of the WiMAX market, not just in the broadband segment, but also in the cellular space. The gradual saturation of 3G networks has given way to the emergence of the 4G market, constituent of LTE and WiMAX. Although LTE is currently being deployed by many cellular operators, there still exists a need to optimize the bandwidth efficiently, to reduce the high operating expenses (OPEX) borne by the operators. Considering the growing customer base demands, deployment of additional resources in terms of bandwidth is necessary, that too, at optimized OPEX. In such a scenario, WiMAX is being considered as an alternate broadband backhaul solution to help operators in offloading their voice and data traffic.

WiMAX (Worldwide Interoperability for Microwave Access) is the fourth generation mobile broadband system defined by the IEEE standard. The WiMAX Forum regulates this technology, while the IEEE monitors its standardization. The global WiMAX market is segmented into equipment, services, and end-user devices market. The services market captures the largest market share in terms of revenue, followed by the equipment market. In order to meet the rising demand for high broadband access, operators are in constant search for high speed network technologies. Enterprises need enhanced efficiency in the existing real-time applications such as video conferencing, while the other users are keen to have television-like experience while browsing through high-bandwidth applications such as YouTube and social networking sites. This rising demand for higher speed with better user experience has compelled operators to go for further enhancements in the broadband space.

The WiMAX market has wide scope in terms of operability as it is capable of operating in both TDD and FDD modes, thereby giving flexibility to the operators. With innovations such as network sharing and hybrid networks budding in the market off late, WiMAX players have immense opportunity; which still remains untapped. TDD is preferred over FDD for WiMAX operations, owing to its flexibility in handling both symmetric and asymmetric broadband traffic. Moreover, TDD saves bandwidth since it uses half the spectrum, as compared to FDD. This, in turn, makes a TDD system cheaper and less complex. As most of the WiMAX traffic comprises asymmetrical data, major WiMAX deployments are being implemented in the TDD mode, thereby facilitating industry players with spectrally efficient alternatives, reducing their OPEX.

Spectrum licensing has various effects on technology; in terms of bandwidth, power, and interference. Since the licensed frequency bands are allocated only to licensees, the interference in these bands is relatively low, thereby benefiting the end-user. In such a scenario, WiMAX operators are at an advantage as they have the flexibility to invest in the licensed bands, thereby being facilitated with superior signal quality.

At the same time, licensed bands are usually expensive as they are auctioned out on a nationwide level. With 5 GHz being a globally recognized unlicensed WiMAX band, medium to small operators find it easier to venture into the license-exempt market as they are not required to compulsorily buy the spectrum, hence providing further flexibility to WiMAX operators.

This research report segments the global WiMAX market on the basis of equipment, end-user devices, and services. It is further sub-segmented in terms of regions and revenues, giving insights of market trends and applications in each sub segment.

This research report categorizes the global WiMAX market for forecasting the revenue, and analyzing trends in each of the following sub-markets:

On the basis of type and services:

On the basis of equipment:

Each of the major and micro WiMAX market segments includes detailed analysis of the factors influencing the market, trends and forecasts, and competitive landscape to understand basic market opportunities and growth strategies required to successfully drive the global WiMAX market.

While developing nations are the most potential markets for WiMAX deployments; established economies such as North America stand only second with respect to the same. Even though several regulatory issues and spectrum allocations have not been made globally, WiMAX remains to be on the broadband roadmap for several economies such as APAC, Europe, and MEA.

Comparison of WiMAX and LTE on the basis of evolution 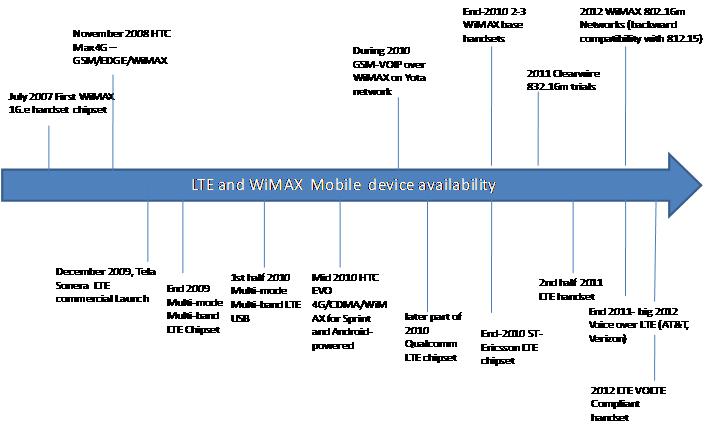 The major forces driving the market include rising need for rural connectivity, WiMAX operability on both licensed and unlicensed spectrum among others. On the other hand, negative portrayal of WiMAX is hampering the growth of the overall market.

Licensed bands are usually pricey as they are auctioned out on a nationwide level. With 5 GHz being a globally recognized unlicensed WiMAX band, medium to small operators find it simpler to venture into the license-exempt market as they are not required to buy the spectrum, hence providing further flexibility to WiMAX operators.