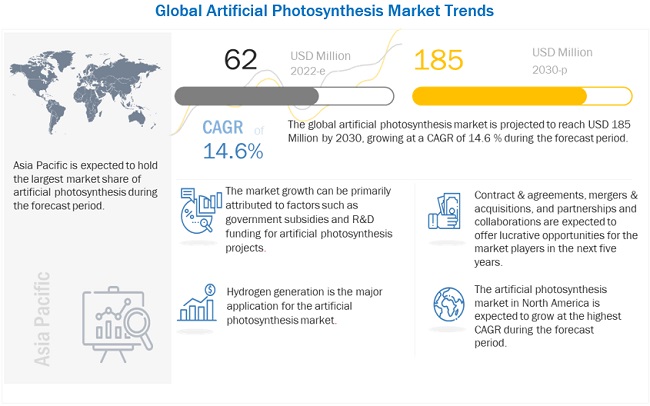 Government fundings and grants for the research and development of artificial photosynthesis technology is among the important driving factors for the growth of the market. In 2020, the US Department of Energy (DOE) announced a plan to invest up to USD 100 million over five years in artificial photosynthesis research to produce fuels from sunlight. The Department's projected expenditure in the Fuels from Sunlight Hub program marks a long-term commitment of US scientific and technology resources to this aggressively competitive and promising field of study.

In Europe, Germany, Spain, and France are the prominent countries that are emphasizing the research activities of artificial Photosynthesis for various applications, including hydrogen generation, hydrocarbon generation. Several research institutes are collaborating with the OEMs to accelerate the research activities. In Germany, Evonik and Siemens Energy have begun a pilot plant using carbon dioxide and water to make chemicals, The project termed as Rheticus, is funded by the German Federal Ministry of Education and Research (BMBF) with a total of Euro 6.3 million. The pilot facility located in Marl, implements artificial photosynthesis technology to produce chemicals from CO2 and water through electrolysis with the help of bacteria. The project aims to close carbon cycle and reduce CO2 emission.

Restraint:  High initial capital and research cost for the set-up

Artificial Photosynthesis is a complex process which integrates the hydrogen and carbon dioxide to obtain valuable fuels. Since the basic chemical process extremely challenging to replicate, to that of natural Photosynthesis, which uses abundant resources of sunlight, water, and carbon dioxide to produce oxygen and energy-rich carbohydrates. Although artificial leaves may be the fuel cells of the future, manufacturing costs remain a key concern. One of the most significant roadblocks to artificial Photosynthesis achieving high efficiency. During the research, the scientists have attempted to achieve higher operating efficiency, however, using expensive catalyst. Furthermore, the compatibility of the photocatalyst to achieve high efficiency rate, add-up to the research cost. Hence, the high initial capital and research cost for the set-up acts as a restraint to the artificial photosynthesis market

In the recent times, the demand for green hydrogen and clean fuel has witnessed progressive rise supplemented by the increasing fundings and grants. For instance, The President of the United States has pledged to develop green hydrogen that is less expensive than natural gas using renewable energy. The US Department of Energy (DOE) is investing up to USD 100 million on hydrogen and fuel cell research and development. To help accomplish the aims of its Green Deal, the European Union would invest USD 430 billion on green hydrogen by 2030. Furthermore, major economies such as, Chile, Japan, Germany, Saudi Arabia, and Australia are all investing heavily in green hydrogen. The preponderance of hydrogen now in use comes from a process known as steam methane reforming, which involves reacting methane and high-temperature steam with a catalyst to produce hydrogen, carbon monoxide, and a little amount of carbon dioxide. Carbon monoxide, steam, and a catalyst react in a later step to make additional hydrogen and carbon dioxide. Finally, contaminants and carbon dioxide are eliminated, leaving just pure hydrogen.

A research team from Liquid Sunlight Alliance (LiSA) and Berkeley Lab's Chemical Sciences Division in California, US, has developed a prototype of artificial photosynthesis device component that converts sunlight and carbon dioxide into two promising renewable fuels: ethylene and hydrogen. The findings also demonstrate the degradation phenomenon of the experimental set-up as well as suggest the preventive measures. The team also shed light on electrons and charge carriers known as "holes" contribute to photosynthetic degradation in artificial Photosynthesis.

Challenge: Need for optimized catalyst and stability of photoanode material

Sunlight is used in artificial Photosynthesis to produce high-value compounds from available resources. It is regarded as the most promising technology for producing sustainable fuels and chemicals. Recent research has resulted in effective light-absorbing semiconductors with high photoelectrochemical output, as well as effective catalysts for converting raw materials into a variety of products. These accomplishments demonstrate that artificial Photosynthesis is conceivable, although there are obstacles to overcome. Water splitting into H2 and O2 necessitates the use of integrated light gathering and catalytic conversion devices. The photoanode material's stability and performance must be increased. For the conversion of CO2 to products like CO, methane, or ethylene, optimised catalysts are required. Finding the correct transition metal catalyst for each desired reaction while balancing activity, selectivity, and stability can be difficult.

North America is expected to dominate the global artificial photosynthesis market between 2022ñ2030 and is projected to grow at highest CAGR. The market growth in this region can be attributed to the supportives program and policies for sustainable innovation and development projects. Artificial photosynthesis being a R&D technology is best suited for these type of government incentives and policies. 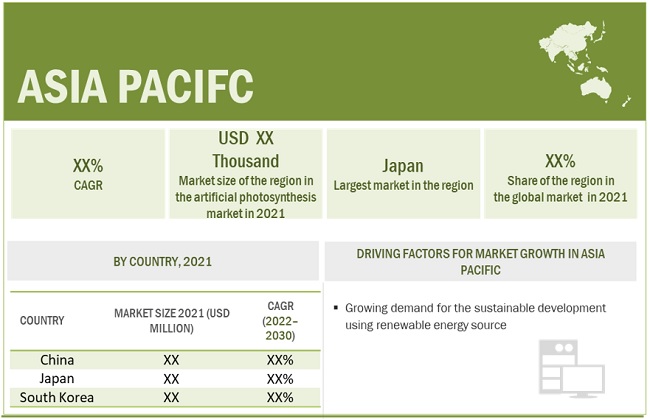 This research report categorizes the artificial photosynthesis market based on Technology, Application, and Region.

Based on the technology:

Based on the application:

Based on the region:

What is the current market size of the artificial photosynthesis market?

The size of the global artificial Photosynthesis is USD 52 Million in 2021.

What are the major drivers for the artificial photosynthesis market?

The artificial Photosynthesis is driven by factors such as government fundings and grants for the research and development of artificial photosynthesis technology; global plans for net zero emissions.

Which region will hold the largest market share during the forecasted period in the artificial photosynthesis market?

Asia Pacific is projected to hold the largest market share during the forecast period. The region faces a tough challenge to reduce its carbon footprint from various fossil-fuel-powered operations, including power generation. Asia Pacific is one of the leading markets that has adopted green technologies to meet the targets set by the governments for reducing greenhouse gas emissions.

Which region will be the fastest-growing during the forecasted period in the artificial photosynthesis market?

Who are the leading players in the global artificial photosynthesis market?

*Details on Business overview, Products offered, Recent Developments, MNM view might not be captured in case of unlisted companies.

The study involved three major activities in estimating the current size of the global artificial photosynthesis market. Exhaustive secondary research was done to collect information on the market, the peer market, and the parent market. The next step was to validate these findings, assumptions, and market sizing with industry experts across the value chain through rigorous primary research. Both top-down and bottom-up approaches were used to estimate the total market size. The market breakdown and data triangulation techniques were employed to estimate the market size of the segments and the corresponding subsegments.

After arriving at the overall market sizeóusing the market size estimation processes as explained aboveóthe market was split into several segments and subsegments. To complete the entire market engineering process and arrive at the exact statistics of each market segment and subsegment, the data triangulation, and market breakdown procedures were employed, wherever applicable. The data was triangulated by studying various factors and trends from both the demand and supply sides in the artificial photosynthesis activities.

With the given market data, MarketsandMarkets offers customizations as per the clientís specific needs. The following customization options are available for this report: