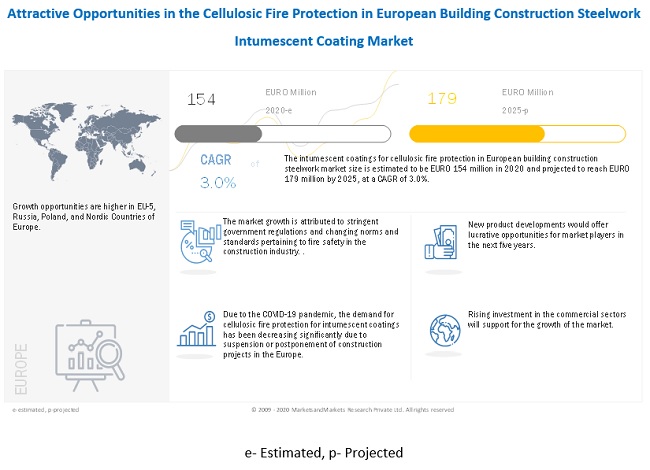 Increasing awareness and emphasis on safety measures as well as increasing preference for lightweight materials, which require additional protection, are expected to drive the market. The stringent regulations and norms are also supporting market growth, as the newly constructed buildings need to meet the required safety and fire resistance standards. Increasing urbanization and the growing building & construction industry are expected to provide growth opportunities in the market during the forecast period.

The COVID-19 pandemic has severely impacted Russia, Poland, EU-5, and Nordic countries. As a preventive measure, construction and industrial activities have been suspended. Several construction projects in Europe has been suspended, which has resulted in a decline in demand for the cellulosic fire protection intumescent coatings. Due to the COVID-19 pandemic, the supply chain has been disrupted, which significantly impacted the paints and coatings industry, leading to a rise in the price of raw materials and other products.

The increasing number of fire accidents, which result in injuries, loss of life, and property damage, has led to the implementation of various codes, regulations, and standards for fire safety and fire protection. In this regard, Europe has the highest number of safety codes and regulations than other regions.

The implementation of stringent regulations and norms is driving the demand for intumescent coatings, as newly constructed buildings need to meet the required safety and fire resistance standards. Considering the growth opportunities, market players are focusing on developing new and innovative products that comply with these stringent safety and fire protection standards.

Thus, as a preventive measure, governments, builders, and construction industries are using intumescent coatings to ensure the utmost safety at housing, commercial, and institutional places. These factors are thereby supporting market growth.

Restrain: Economic slowdown and impact of COVID-19 on the construction industry

In the last three months of the last quarter of 2019, the 28 countries in the European Union grew by only 0.1% compared to the previous quarter (Source: European Union). Several factors have contributed to this slow growth, including the widespread strikes in France, recession in Italy, and the slumping world trade. In 2019, Eurozone countries grew by 1.2% compared to the previous year; countries such as Sweden, Poland, and Romania, which are not a part of the Eurozone, increased by 1.4% (Source: Eurostat).

Most of the European countries, especially Russia, Italy, Spain, the UK, France, and Germany, are severely impacted by the COVID-19 pandemic. The suspension of operations in several manufacturing sectors has resulted in a decline in the GDP of these countries. According to the OECD, the European Union (EU) GDP reduced by 3.3% in the first quarter of 2020. Due to economic losses, several large construction projects were halted and suspended until the economy's recovery. This decline in the construction spending in Europe will, in turn, result in a decline in the demand for intumescent coatings.

Prolonged exposure of intumescent coatings to harsh environments alters their properties, resulting in the orange-peel effect, which is a major issue related to the use of these coatings. Besides, improper application and pre-application surface treatments result in sagging of the coatings on the substrates. Furthermore, when in contact with fire, the coatings swell up, forming a charred layer. This emits smoke, which can affect the visibility of the people trying to evacuate a certain area. The key players in the intumescent coatings market are focusing on developing coatings that protect against fire, generate less smoke, and have thinner film and good aesthetic properties. Developments in these areas will boost the European market for intumescent coatings.

Water-based intumescent coatings are safer than solvent-based coatings as they do not contain harmful solvents and have low odor and VOC emissions. Also, water-based coatings can withstand high humidity levels during application. These coatings have been developed to enable customers to meet the stringent emission standards set by various agencies, such as REACH.

In high ambient temperatures, these coatings take less drying time as compared to solvent-based coatings. Water-based fire protection coatings can bear a small amount of moisture on the substrate as these coatings will absorb this moisture during their drying process. On the other hand, solvent-based intumescent coatings do not absorb moisture and leave it as an incomplete layer between the coating and the substrate, resulting in loss of adhesion.

End-users are becoming aware of the harmful effects of solvent-based or epoxy-based intumescent coatings, which have high VOC emissions. To solve this high VOC emissions problem, manufacturers are coming up with hybrid technologies, such as a combination of water and epoxy-based coatings that are eco-friendly. All the above benefits of water-based coatings are boosting their demand. 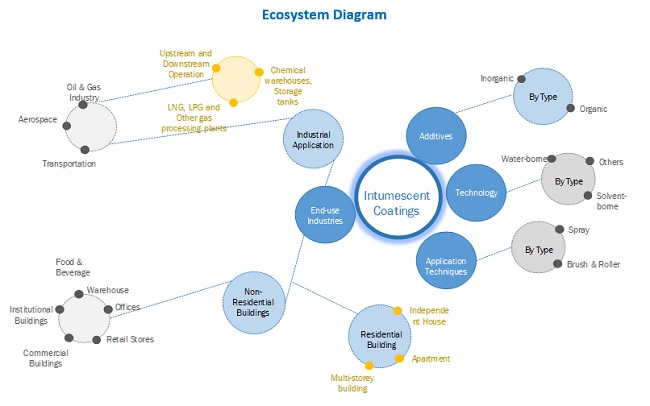 Germany is projected to have the largest share in the Europe market, in terms of both value and volume, from 2020 to 2025. In Germany, stringent regulation was imposed wherein technical regulations pertaining to fire safety in building & construction were enforced to ensure safety and protection from fire accidents. Owing to this, significant growth in demand for intumescent coatings was registered from the residential, commercial, and industrial sectors.

Most of the European countries, especially Russia, EU-5 countries, and Nordic countries, are severely affected by the COVID-19 pandemic. The suspension of operations in several manufacturing sectors has resulted in a decline in the GDP. According to the OECD, the European Union’s (EU) GDP shrank by 3.3% in Q1-2020. 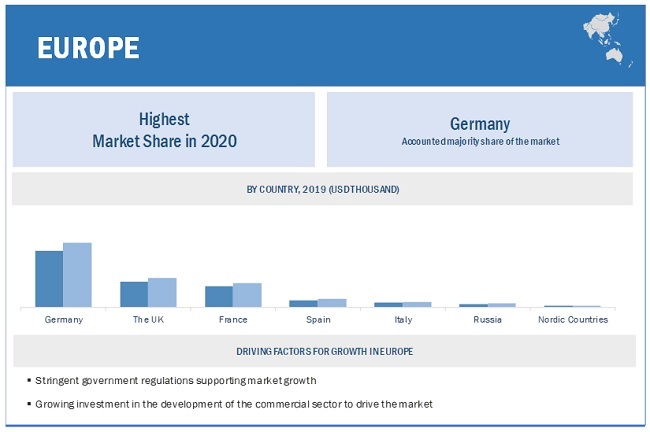 Key players such as AkzoNobel (Netherlands), The Sherwin-Williams Company (US), PPG Industries (US), Jotun (Norway), and Hempel (Denmark) have adopted various strategies to strengthen their product portfolios, expand their market presence, and enhance their growth prospects in the intumescent coating for cellulosic fire protection in European building construction steelwork market.

What are the major drivers influencing the growth of the intumescent coating for cellulosic fire protection in European building construction steelwork market?

What are the different types of intumescent coating, and what affecting the selection of the coatings types?

What are the major applications for intumescent coating for cellulosic fire protection in building construction?

What is the impact of the COVID-19 pandemic on the market?

With the growing intensity of the COVID-19 pandemic across the region, several construction projects in Europe and North America have been suspended, which has resulted in a decline in demand for the cellulosic fire protection intumescent coatings.

What is the impact of changing regulatory scenarios on the market?

In European countries, due to the imposition of the regulation to ensure safety and protection from fire accidents in the residential and commercial buildings had resulted in significant growth in demand for intumescent coatings.

What are the emerging trends that are observed in the market?

Over the recent past, several key players have channelized their efforts toward the development of new products to cater to the changing end-user demands. The launch of new products also helps these players gain a competitive edge over other players. In this regard, several key players are making significant investments in R&D activities. In March 2017, Jotun Group opened its new state-of-the-art R&D center at its Flixborough site in the UK. The facility will focus on R&D and bring about innovations in passive fire protection and insulation coatings. This is expected to enhance Jotun’s position in the intumescent coatings market.

Who are the major players involved in the market?

AkzoNobel (Netherlands), The Sherwin-Williams Company (US), PPG Industries (US), Jotun (Norway), and Hempel (Denmark) are the leading players involved in the market. .

The study involved four major activities for estimating the current size of the intumescent coating for cellulosic fire protection in European building construction steelwork market. Exhaustive secondary research was carried out to collect information on the market, the peer market, and the parent market. The COVID-19 pandemic impact on the demand with respect to construction areas and countries were comprehended. The next step was to validate these findings, assumptions, and sizes with the industry experts across the value chain of the market through primary research. Both the top-down and bottom-up approaches were employed to estimate the overall size of the market. After that, market breakdown and data triangulation procedures were used to determine the size of different segments and sub-segments of the market.

Note: The three tiers of the companies were decided based on their revenues in 2019.

After arriving at the overall market size from the estimation process explained above, the total market was estimated. The data triangulation and market breakdown procedures were employed, wherever applicable, to complete the overall market engineering process and arrive at the exact statistics for all building constructions wherein the cellulosic fire protection for intumescent coating are applied. The data was triangulated by studying various factors and trends from both the demand- and supply-side.

With the given market data, MarketsandMarkets offers customizations according to client-specific needs. The following customization options are available for the Intumescent Coating for Cellulosic Fire Protection in European Building Construction Steelwork report: