The global wind turbine market, a rapidly growing segment of global energy market, has recorded double digit annual growth in past five years and is expected to maintain this growth till 2015 by reinstallation and addition of new generation turbines as well as increase in their size and efficiency. Factors responsible for the growth of the global wind turbine market include rising prices of non-renewable energy sources, supportive regulatory environment, growing energy consumption, and utility scale generation. Ever growing consumption of electricity, especially in developing countries such as China, India, Russia, and Brazil has boosted the market for alternative domestic sources of electricity. Wind is absolutely free. It offers low maintenance cost and electricity generated from it can also be cheap, once the turbine installation cost is recovered. Many countries are utilizing electricity from wind power plants. The U.S., Germany, Spain, India, and China are the major countries involved in generation of wind energy.

The major problem with wind power is that it is capital intensive as compared to traditional non-renewable energy. In case of wind energy, more than 70% cost is associated with the plant setup. Installation of wind turbine alone costs around 75% of the total installation cost and more than 50% of the overall cost. However, with continuous technological innovations, their costs are coming down.

Turbine cost per megawatt has reduced significantly in the past few years. The reduction became possible due to turbine design stability, which improved the efficiency of production lines at turbine manufacturing facilities. Another reason for per megawatt price reduction is cheap resources in the Asia-Pacific region. Companies such as Vestas Wind Systems A/S, Siemens Wind Power A/S, and Gamesa Corporacion Tecnologica have moved their manufacturing towards countries such as India or China to take advantage of low resource costs.

Prices have reduced at greater pace than costs and thus wind turbine industry is facing reductions in profit margins. In 2010, estimated average profit margin was around 10%, which used to be about 27% in 2004. The main reason for the reduced margin is decreasing turbine prices, which is due to oversupply and possibility of per megawatt price reduction.

Offshore wind has tremendous potential and is still unutilized. In 2009, only 1.2% was contributed by offshore wind installations globally. Despite more potential, offshore installations stand at around 27 GW as compared to 132 GW onshore installations. The main reasons behind the slow growth of the offshore wind installations are transportation and installation of heavy machineries, supplying generated power to onshore grids, and possibility of the loss of excess power due to integration issues. Now, these challenges are being taken care of by technological innovations, improvements in grid infrastructure, support from various governments, and co-operation in the field of offshore wind power. In December 2010, Sweden, Denmark, Germany, The Netherlands, Luxembourg, France, UK, Ireland, Norway, and Belgium signed a memorandum of understanding (MoU) for joint development of an offshore electricity grid, which held the responsibility for integration of offshore wind power at North Sea. The grid is expected to maintain 150 GW offshore wind power by 2030. It will contribute 16% of the Europe’s electricity consumption by 2030 and 46% by 2050.

This report analyzes the global wind turbine market in terms of cumulative and new installed capacities (MW) in North America, Europe, Asia-Pacific, and Rest of the World (ROW) and in China. The report covers types and sizes of wind turbines and technologies. Recent updates and developments in global and China wind turbine markets are also included in the report.

Stakeholders
The intended audience of this report includes:

For future forecast, the global market is divided into four regions: Europe, America, Asia-Pacific, and Rest of the World (ROW). List of countries - region wise is provided in Appendix. Megawatt installations forecasts consider different countries’ renewable energy targets, plans, wind potentials, and investments. For value analysis (dollar billion market), the report assumes three things: No major change in steel prices during 2010 to 2015. There is no inflation or value of U.S. dollar is constant during the period and no major change in wind turbine technology that may lead to change in production lines at manufacturing. Also, the cost breakdown by turbine components and by raw material is assumed to be fixed from 2008 to 2015.

The demand for energy from renewable sources has been rising since the last decade. Global wind turbine cumulative installed capacity reached to 159 GW in 2009 from 292.9 GW in 2003, which is an increase of whopping 310%. The growth potential of wind in future also looks very promising. According to our research, installed capacity is expected to increase by 173% and reach 434.5 GW by 2015. The industry growth is supported by market drivers such as increasing price of non-renewable energy like crude oil and natural gas, growing energy consumption particularly from emerging countries, pro-wind regulatory environment for wind projects & wind farms, and increase in utility scale wind energy generation plants. 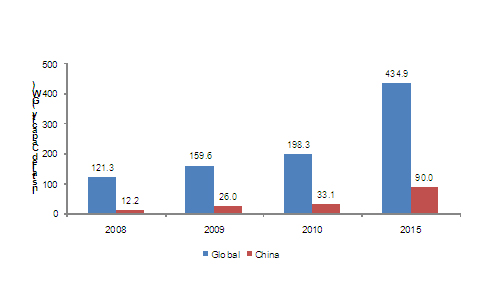 China is the largest and fastest growing market that has recorded whopping 449% growth over the last six years and reached 26 GW installed capacity in 2009 from mere 567 MW in 2003. The market of China is expected to show similar growth of increase by 282% with new addition of 73.3 GW installations between 2009 and 2015.

Benefited by the market growth in China, Asia-Pacific became the fastest growing region. In 2009, Asia-Pacific led the growth with addition of 16 GW of wind turbines, followed by Americas with 11.6 GW, and Europe with 10.5 GW. The other parts of the world could manage 168 MW new installations in 2009. China, alone added 13.8 GW, 86% of Asia-Pacific and 36% of global installations. China’s turbine market growth is supported by the internal market drivers such as government support through various subsidies, increasing demand for turbines from existing and proposed wind farms, and inexpensive raw material availability. China has also become the best place for turbine and component manufacturing due to cheaper resources availability. Recently, the government of China removed ‘70% domestic content’ policy to maintain larger market shares till now. The removal of this rule has eased MNC’s to set up new manufacturing facilities in China. Entry of foreign players will put the pressure on domestic players in terms of delivering technically superior products.