The emergence of esports is expected to transform the outlook of sports industry. Major revenue streams for esports include media rights; tickets and merchandise; sponsorships; direct advertisements; and publisher fees. In revenue-generating streams, sponsorships and advertisements are the major sources of revenue generation that have witnessed burgeoning demand during the last five years. The base year considered for the study is 2017, and the forecast is for the period between 2018 and 2023.

The market for online games is growing at a healthy pace owing to factors such as growing adoption of advanced gaming technologies, changing entertainment preferences among consumers, rising income levels, and growing demand for mobile gaming. The increasing smartphone penetration and better internet connectivity have led to rise in the number of gamers at a rapid pace. 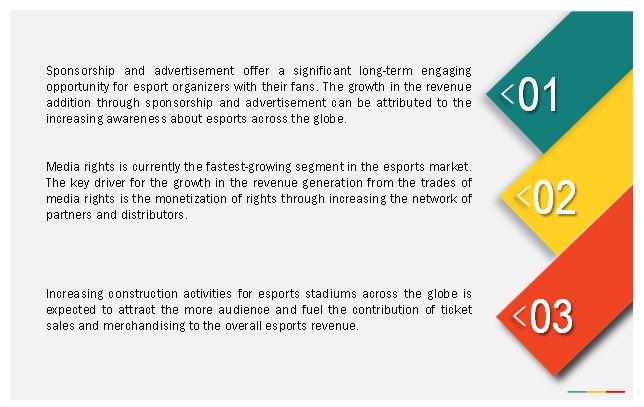 During this research study, major players operating in the esports market in various regions have been identified, and their offerings, regional presence, and distribution channels have been analyzed through in-depth discussions. Top-down and bottom-up approaches have been used to determine the overall market size. Sizes of the other individual markets have been estimated using the percentage splits obtained through secondary sources such as Hoovers, Bloomberg BusinessWeek, and Factiva, along with primary respondents. The entire procedure includes the study of the annual and financial reports of the top market players and extensive interviews with industry experts such as CEOs, VPs, directors, and marketing executives for key insights (both qualitative and quantitative) pertaining to the market. The figure below shows the breakdown of the primaries on the basis of the company type, designation, and region considered during the research study.

The intended audience for this report includes:

Based on the given market data, MarketsandMarkets offers customizations in the reports as per the clientís specific requirements. The available customization options are as follows:

Electronics sports (esports) are competitive tournaments organized for video game players. It imitates the experience of viewing a professional sports event, where audiences watch video gamers compete against each other. Esports events comprise competitive leagues and tournaments. The esports revenue is generated through sponsorships and advertisements, tickets and merchandise, and media rights. Sponsorships play a vital role in the esports business, as the increasing number of companies are investing in the esports industry. Further, with increasing player wages and expanding esports market, the introduction of new sponsors is critical for the future commercial success of esports. As the esports market matures in the coming years, the revenue generation opportunities would also increase.

Of all the major revenue streams for the esports market, the contribution from media rights is expected to grow at the highest CAGR during the forecast period. Media rights are significantly contributing to the global esports industry. The easy access to a communication technology has enabled fans worldwide to track live esports activities. Media organizations pay a huge amount for winning the exclusive rights to broadcast the live streaming of top esports events.

APAC dominated the global esports market, with the largest market size and highest estimated CAGR for the forecast period; the region accounted for almost one-third of the overall market in 2017. The growth of this industry can be attributed to the increasing number of esports competitions in the region. Asia has always been an attractive market for the gaming industry, especially owing to the ease of entry, compared to other markets. Moreover, a number of esports spectators, sponsors, and brands from the western countries are increasingly investing in the market in this region. 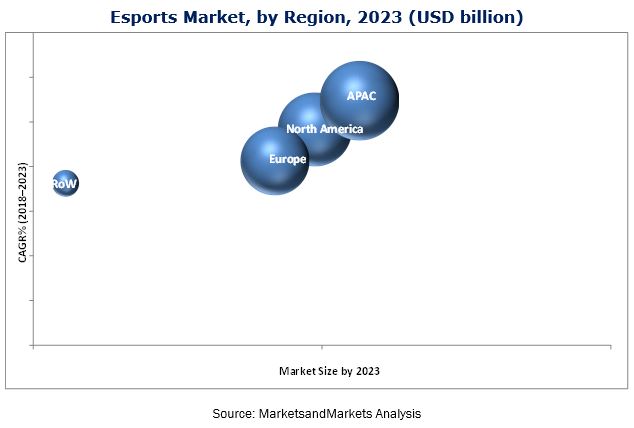 To request to know about sample pages on the above findings, click Request Sample

Increasing popularity of video games and growing awareness about esports drives the growth of esports market.

Media rights are significantly contributing to the global esports industry. The easy access to a communication technology has enabled fans to track live esports activities across the globe. Media organizations pay huge sums of money for winning the exclusive right to broadcasting the living streaming of top sporting events. In recent years, the sale of broadcasting and media rights has been the largest source of revenue for most of the esports organizers. The revenue generated from the trade of media rights is used to finance major sporting events, renovate stadiums, and contribute to the development of esports at the grassroots level.

Sale of ticket and merchandise is the core aspect of the esports revenue stream. Currently, ticket sales account for a small percentage of the overall revenue of the esports market as the audience size for the events organized every year rarely exceeds 10,000 per events. Further, many esports fans aren't willing to travel or pay to watch games played live, especially when they are available to watch on Twitch and YouTube for free.

Esports is a lucrative business wherein sponsorship and direct advertisement contribute large value to the market. In recent years, sponsorship has witnessed a vast increase, bringing a whole new dimension to the concept of professional gaming. Sponsorship and direct advertisement offer various opportunities to the brand owners to directly reach to the game fans in an event. Booths, video displays, posters, freebies, interactive advertising, and many other creative methods facilitate this reach to the brands. On ground sponsoring is cheaper than an online advertisement, and tends to be influential, especially, for companies offering products and services directly related to gaming.

In the recent years, publishers have been aggressively entering into the esports business and are also looking forward to grow their titles into spectator sports to engage their existing fans while extending reach to new fans. Publishers are collaborating with esports organizers to help them organize leagues and events around their franchises. In the esports market, publishers enhance the core value of intellectual property (IP), while giving publishers an opportunity for additional exposure via revenue share, application programming interface (API) fees, and strategic investments.


Critical questions would be answered

Threat from esports gambling/betting is the major restraining factor for the growth the esports market. Additionally, the esports market faces some challenges associated with lack of standardization associated with playerís salary. This report describes the drivers, restraints, opportunities, and challenges pertaining to the  market. Moreover, the report analyzes the current scenarios and forecasts the market until 2023. Furthermore, this report includes the market segmentation based on revenue streams and region.

Some of the major companies in the esports market include Modern Times Group (Sweden), Activision Blizzard (US), FACEIT (UK), Nintendo (Japan), Gfinity (UK), Turner Broadcasting System (US), CJ Corporation (South Korea), Valve Corporation (US), Tencent (China), and Electronic Arts (EA) (US) among others.