The base year considered for company profiles is 2017. Whenever information was unavailable for the base year, the previous year was considered.

This research study involved the use of extensive secondary sources, directories, journals on power generation technologies and other related rental markets, newsletters and databases such as Hoover’s, Bloomberg, Businessweek, and Factiva to identify and collect information useful for a technical, market-oriented, and commercial study of the global floating LNG power vessel market. The primary sources include several industry experts from the core and related industries, vendors, preferred suppliers, technology developers, alliances, and organizations related to all the segments of this industry’s value chain. The research methodology has been explained below.

After arriving at the overall market size, the floating LNG power vessel market was split into several segments and subsegments. The figure given below illustrates the breakdown of primary interviews conducted during the research study on the basis of company type, designation, and region. 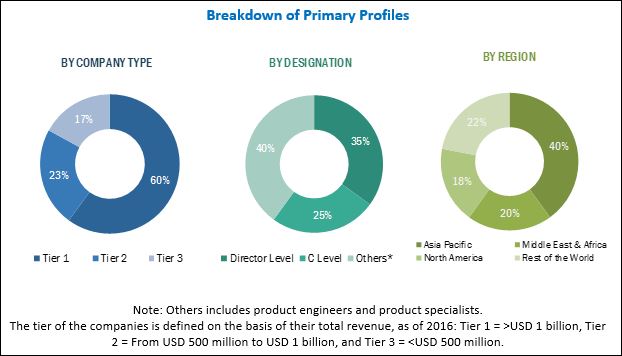 With the given market data, MarketsandMarkets offers customizations as per the client’s specific needs. The following customization options are available for this report:

Detailed analyses and profiling of additional market players (up to five).

Increasing demand for power, coupled with the lack of power infrastructure

The demand for power in the industrial sector exceeds the supply. Several industries are facing an acute shortage of power. The governments are therefore encouraging and mandating efficient power consumption for the industrial sector to reduce the demand and supply gap. Additional power plants have also been set up as a permanent power solution. However, establishing permanent power plants is capital-intensive and time-consuming. Such government initiatives have increased the demand for power. However, the grid infrastructure, particularly in most of the developing countries, is unable to meet the increasing demand for power. Several countries in the Asia Pacific, the Middle East, Africa, and South America have seen poor planning and shortfall in capital expenditure, which has created market opportunities for temporary power solutions and accentuated the need for non-renewable floating power plants. The lack of infrastructure has thus increased the demand for floating power plant solutions.

Gas importers face disparity in prices as the production and supply of most of the world’s natural gas is concentrated in a few countries. While 40% of the total global natural gas production comes from the US and Russia, nearly two-thirds of the total global reserves are located in Russia, Iran, and Qatar. The trade of liquefied natural gas (LNG) is highly localized with only 14% traded in international markets, compared to more than 70% of crude oil. Hence, pricing negotiations are mostly carried out in a confidential manner for large supply agreements, such as the one between Russia's Gazprom and China National Petroleum Corporation (CNPC) in 2014. Utilities in North America pay a much lower cost for natural gas than those in other countries that heavily depend on imports, such as India. India has a natural gas-fired power plant capacity of nearly 24,000 MW, only 20% of which was operational in 2014 due to the high cost of imported natural gas. As a result, the price disparity in the international trade of natural gas is a restraint for the floating LNG Power Vessel market.

Note: The developments mentioned above are for the floating LNG power vessel manufacturers
Source: Company Websites and Press Releases

The global floating LNG power vessel market is projected to reach a market size of USD 931.6 million by 2023 from an estimated USD 860.1 million in 2018, at a CAGR of 1.61%. This growth can be attributed to the increasing demand for power, lack of power infrastructure, and added benefits over land-based power plants.

The report segments the floating LNG power vessel, by vessel type, into power barge and power ship. The power ship segment is expected to hold the largest market share by 2023. The power ship is generally used in the energy leasing market for short- and mid-term contracts because of its self-propelling property. Karadeniz Holding (Turkey) dominates the supply of power ships in the market. Most of the projects use power between 100 MW and 150 MW and run on liquid fuel or natural gas, which are expected to witness high growth in the market. 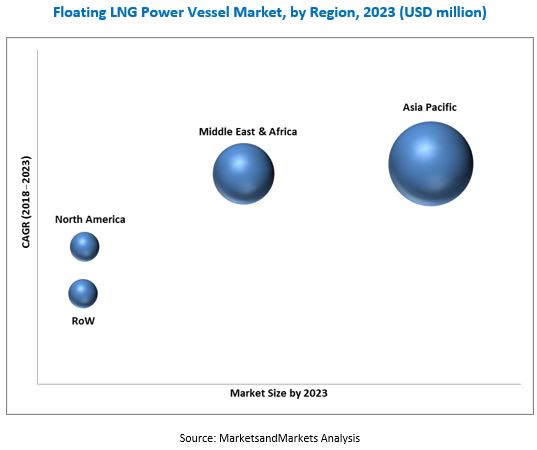 The high capital cost associated with the operations, maintenance, transportation, and logistics, price disparity across regional markets, and increasing focus on renewable energy could act as restraints for the market. The leading players in the floating LNG power vessel market include Siemens AG (Germany), MAN Diesel & Turbo SE (Germany), Wärtsilä Corporation (Finland), General Electric Company (US), and Caterpillar Inc. (US). Contracts & agreements is the most commonly adopted strategy by the top players. It is followed by new product launches and partnerships, collaborations, alliances, and joint ventures.

The demand for marine gensets operating on diesel fuel oil as well as natural gas (LNG) has increased. The gas and fuel oil hybrid increases fuel efficiency and lowers the cost of operations. The maintenance cost of operating hybrid gensets is also lesser as compared to single fuel oil powered marine genset. Operation & maintenance costs are an important factor for the end-user. Lower emissions than only-diesel gensets is another advantage of hybrid-fuel powered marine gensets, especially the ones with natural gas and diesel fuel option. Hybrid gensets produce a less volume of sulfur oxides (SOx) as well as NOx and particulate matter emissions. These advantages along with stringent emission norms have increased the demand for hybrid-fuel powered marine gensets and have created new opportunities for the component manufacturers in the floating LNG Power Vessel market.

Growth in adoption of LNG as an energy source

According to the International Energy Outlook 2017 (IEO2017), the world’s natural gas producers are expected to increase supplies by 42% from 2015 to 2040. In Russia, the production of natural gas is expected to increase mainly due to increasing development of resources in the country’s Arctic and eastern regions. The US production growth is mainly from shale resources. In China, production would increase due to the development of shale resources, which are projected to account for over half of the country’s total natural gas production by 2040. The comparatively lesser emissions of natural gas-fired power plants at costs that are lower than renewable energy generation are providing an alternative to utilities facing stringent emission regulations. Utilities in the US have responded to the tough emission regulations on coal plants by switching to natural gas-fired power generation. Policy makers are also seeking to leverage gas-fired plants as an option to help reduce overall emissions in the near term. Cleaner gas-fired electricity generation is expected to drive the LNG power generation market. The benefits of floating power plants would provide a growth opportunity for the floating LNG power vessel market.

Distributed generation is the act of power generation carried out at or close to the point of end-use. Distributed generation systems are generally defined as being less than 100 MW in capacity (typically less than 50 MW) and can be stationary as well as mobile in nature. Distributed power technology includes solar panels, gas and diesel engines, small wind turbines, fuel cells, and gas turbines. The demand for energy from distributed energy resources has grown globally due to several reasons, such as planned rolling blackouts, power quality problems, unexpected utility power outages, and increases in power costs. Instead of relying totally on utilities for power needs, end-users, which include residential, commercial, and industrial customers, have started generating power from distributed energy sources. This approach is backed by incentives offered by governments, such as net metering and feed-in tariffs, among others. The General Electric Company (U.S.) estimates that annual distributed power capacity additions will rise from 142 GW in 2012 to 200 GW by 2020, while investments in distributed power technologies will grow to USD 206 billion by 2020. Meanwhile, utilities have also started shifting their business models from directly selling electricity to involving end-users as a part of their business to cater to the peak demand without large-scale capacity additions. This, in turn, will eliminate the need for the construction of a new power plant. Hence, the distributed generation resources could pose a challenge for the floating LNG Power Vessel market.